Fundraising numbers say: not even close. 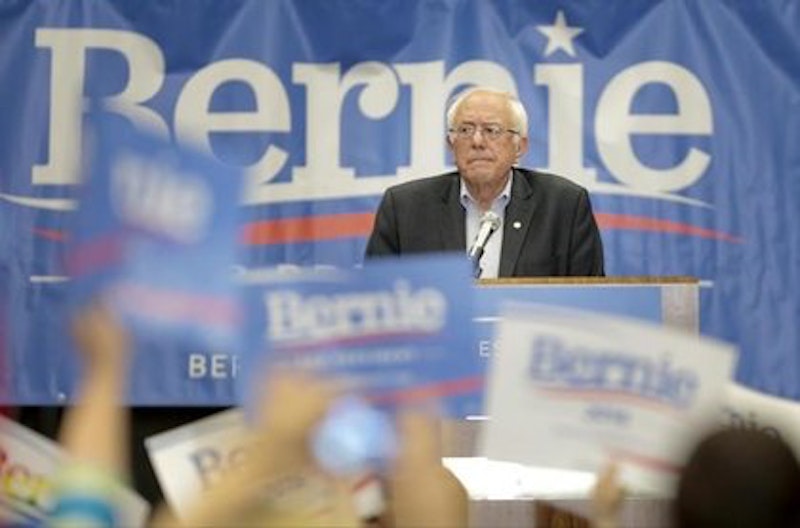 Can Bernie Sanders do in 2016 what Barack Obama did in 2008? The answer is clear. No. Or even, possibly, hell no, what are you smoking, hippie Sanders supporters?

But why is the answer clear? After all, Sanders now occupies the position Obama did in 2008. He's an insurgent candidate, showing surprising polling and fundraising strength vs. the establishment candidate, Hillary Clinton. History, Sanders argues, can repeat itself. That's Sanders argument: "I think the message that we have is resonating. People are going to get involved in the political process, we're going to drive turnout up and when we do that we win." Obama might have said the same thing in 2008. If he could do it, why not Bernie?

Bernie and Obama look superficially similar. But by the numbers, they're very different. And "numbers” means fundraising.

Sanders' fundraising has been very impressive. He started his campaign in late April, and in April, May and June, his first quarter of campaigning, raised $15 million. Fully 99 percent of those donations were from small donors under $250. In terms of donations directly to candidates, Sanders is doing better than basically all the Republican candidates, including Bush (with $11.4 million) and Ted Cruz (with $14.3 million.) Bush and Cruz and other Republican candidates are also getting SuperPac donations that dwarf Sanders' haul—but still.

When Obama ran in 2007-2008, though, he did a lot better. Sanders, again, didn't start his campaign till April of this year, but Obama was already up and running in the first three months of 2007. He raised $25 million—putting him on a par with Clinton's fundraising in the same period. In the second quarter—the period in which Sanders has raised $15 million—Obama raised $32 million dollars. Not only is that double Sanders' total in 2015, it was also more than Clinton raised in 2007. In other words, at this point in the nomination process in 2007, Obama was already ahead of Clinton in fundraising.

Sanders is not ahead of Clinton—and not just because he's not fundraising as well as Obama. Clinton has also done better with in 2016 than she did in 2008. In the second quarter of the year, she raised $45 million—three times as much as Sanders did. If you add in Super Pac contributions, she's up to $67.8 million. At this point in the nomination process in 2007, Obama was beating Clinton. Sanders is struggling to reach one quarter of her donations.

Fundraising isn't everything, of course. John McCain won the 2008 Republican nomination even though rival Mitt Romney raised more money during the competitive part of the primary. Ron Paul in 2012 did very well in raising money even though he never had much of a chance of being the nominee. But the fundraising differences between Obama and Sanders are important, in part because they point to larger differences between the candidates.

Those differences are perhaps summed up in one, simple distinction. Obama wasn't an insurgent candidate. Or at least, he had a lot of establishment support—especially after he showed early on that he could fundraise at the same level as, and even better than, Clinton. More, while Obama raised huge amounts from small donors online, he also raised a great deal of money from traditional larger donors according to Brookings Institute campaign finance expert Anthony Corrado in his chapter of The Making of the President 2012. Obama's early strength came in part from insurgent grassroots fundraising. But it was also a sign of his appeal to the usual Democratic donor base.

The fact is, by this point in the race in 2007, some people were already suggesting that, on the strength of his fundraising, Obama could be considered the frontrunner. He was out-raising Clinton; he had major establishment support. The race in 2008, for many reasons (most notably Clinton's early vote for the failed Iraq War) was up for grabs from the beginning. Clinton simply did not dominate, either in fund-raising or establishment support, as she has dominated in 2016. Obama's victory in 2008 wasn't meaningfully an upset to anyone who had been paying attention to fundraising since 2007. Sanders is much further behind at the beginning of the race than Obama ever was.