Ward, We Have a Problem With Hillary

David Remnick joins the list of liberal pundits worried about an HRC coronation. 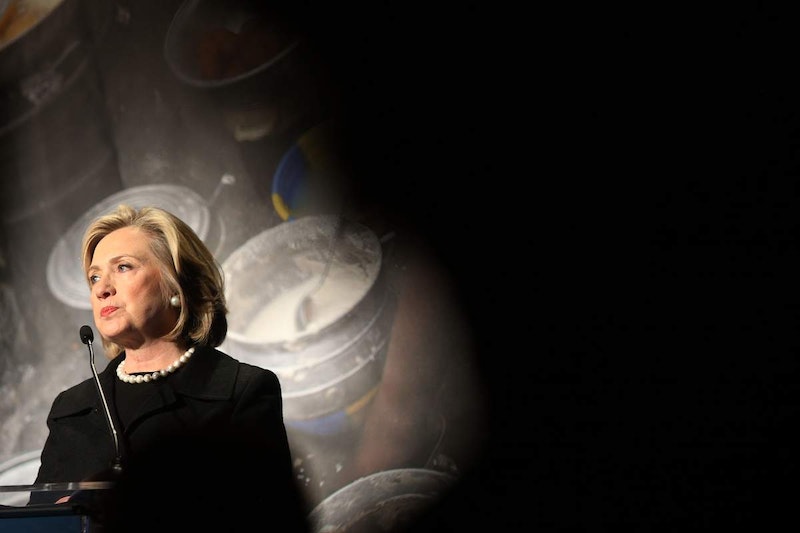 Over the weekend, my 20-year-old son Booker, normally more engrossed in Julian Barnes’ fiction, the bands Of Montreal and Chumped and baseball sabermetrics, asked who I thought would win the 2016 presidential election. He’d just read a profile of Jeb Bush in Time—I quickly disabused him of the idea that Time is anything more than a repository for warmed-over political commentary—and was curious about my take. I truthfully told him that in early 2015 it'd be foolhardy to make rash conclusions, although I did offer my opinion that Bush can’t get past his negative approval ratings and—at this point—unfortunate last name, but if Scott Walker keeps tripping up, perhaps there was an opening for Sen. Marco Rubio. I explained why either man would be a formidable challenger to Hillary Clinton: Walker because he’s not wealthy and his regular-guy patter has resonance; Rubio for his potential to reverse the GOP’s slide into an all-white Party, not to mention that he represents Florida.

Right now, though, with Republicans in the early stages of slugging it out, the more fascinating question is whether Clinton can wave a wand for the Democratic nomination, her email whopper, coziness with the extraordinarily wealthy Americans Democrats, or progressives, are supposed to hate, and fishy donations to the ostensibly philanthropic Bill, Hillary and Chelsea Clinton Foundation notwithstanding.

In this week’s New Yorker, editor (and Barack Obama biographer) David Remnick tackled the problem of Hillary’s “inevitability,” under the guise of his vexation that the United States has never elected a female president, and that Clinton, who in 1995 at the World Conference on Women gave “an unsparing assessment of so many of the grimmer aspects of the female condition,” a speech he believes was as “eloquent in its way” as Obama’s “race speech” in 2008. Hillary, Remnick unhappily muses, has apparently lost that fervor in her quest for the White House, instead dissembling about the email controversy last week. He continued: “Clinton’s further explanations were so familiar, such a ride in the Wayback Machine, that you had to wonder, Why do I suddenly feel twenty years younger yet thoroughly exhausted?”

Remnick repeats the theme of at least this month, that a contested Democratic primary will make Clinton stronger (or not), as she’ll be forced to defend her alleged foreign policy hawkishness, ties to Big Money and actually articulate broad visions for America after Obama leaves office. Remnick wonders where her primary challengers are, although he doesn’t name a single candidate. And while it may be uncharitable to mention, Remnick closes with this lulu: “Isn’t there a chance that the greatest nostalgia we might feel, come primary season, is not for earlier iterations of the Clintons and Bushes but the President who has not yet finished his time in office?” I find that scenario very unlikely, but I’m guessing it’ll make for at least one or two chapters in Remnick’s next book on Obama.

Meanwhile, The Nation’s Katrina vanden Heuvel took to Twitter on Monday to congratulate herself that it’s “Good to see @newyorker agrees with @thenation on value of a competitive Democratic party primary.” Yes! The Nation is still relevant! And the Boston Red Sox will win 120 games this season!

At least The Nation, unlike Remnick, did tick off any number of challengers who could toughen up Clinton. Nothing new here, but at least names were named: obviously, first came Sen. Elizabeth Warren, despite her still-steadfast refusal to run, and then socialist Bernie Sanders, Jim Webb (an odd one for The Nation, but never mind), Martin O’Malley, Deval Patrick and even Joe Biden.

Finally, Remnick threw in that “[S]ince it will soon be political high season on cable TV and at the town halls and diners of Iowa and New Hampshire, it bears repeating that no woman has every been the President of the United States.” As Remnick’s a smart fellow, I can only assume he was facetious: it’s not as if cable TV has a monopoly on 2016 presidential handicapping. Every op-ed columnist (and political reporter) in the country, no matter the ideology, has weighed in on the subject. Every single day this year. If Remnick feels exhausted recalling the very turbulent and downright weird twists and turns of Bill Clinton’s two-term presidency, in which Hillary played a too-central role, imagine what he’ll be like by the end of next year. If I were not assured that The New Yorker chief has no trouble putting genetically-approved chicken, Whole Foods produce and craft beer on the table, I’d take up a collection on his behalf for a very comfy rocking chair.