No one needs to see the neocon on the tube ever again. 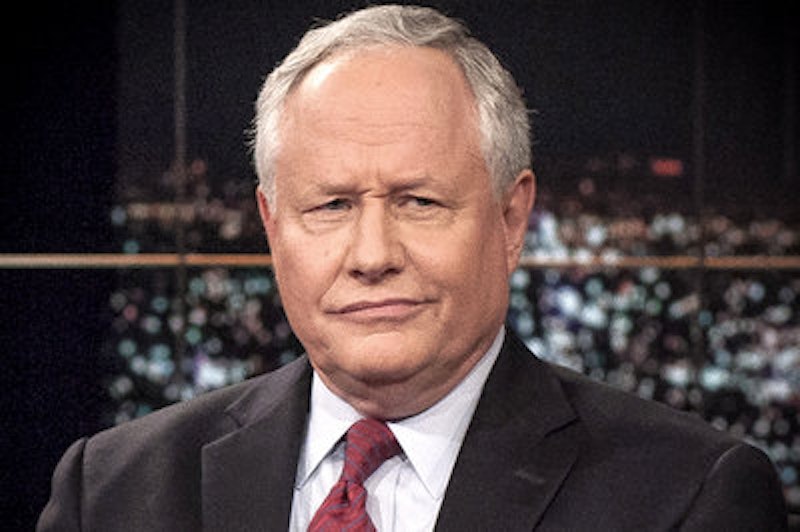 Blatant racism was exposed at Oklahoma University last week when SAE fraternity members were filmed on a bus drunkenly singing a lynching song: "You can hang them from a tree, there will never be a nigger SAE." Joe Scarborough addressed the issue on MSNBC’s Morning Joe, and he invited the smug TV pundit and neocon firebrand Bill Kristol on his all-white panel to get to the root of the matter, as only white people can. Kristol intoned that it was all a matter of some poor, malleable white kids who’d just been mimicking rap songs. Chiming in after some ludicrous, irrelevant commentary on the incident by both Scarborough and his sidekick Mika Brzezinski, Kristol added that it was no surprise "some drunk 19-year-old kids repeat what they hear on the radio." I'm no hip-hop expert, but I'd bet that rappers aren’t rhyming about the glories of lynching black people. If you doubt that Kristol isn’t credit-worthy, remember he’s the person given credit for convincing John McCain to choose Sarah Palin over Mitt Romney as the 2008 VP candidate.

What’s odd about Kristol is that, despite having graduated from Harvard magna cum laude in three years, he’s rarely right about anything. When not penning pompous pro-war screeds in The Weekly Standard, (sample quote: "The idol of war weariness can be challenged. A war weary public can be awakened and rallied. All that is needed is the rallying.") he appears on various TV news shows, weighing in confidently—if not cogently—on topics like race relations, which he clearly knows nothing about. Never being right is no barrier to being asked back again in today's MSM circus atmosphere. Once the media recognizes someone as a "bona fide" television pundit, they’re granted something similar to academic tenure.

Kristol craves war like a comic craves laughs. His mind is only able to embrace military solutions to global problems, and the wars he fantasizes about always have short, happy endings. He predicted that the Iraq war would be a “two month war, not an eight year war." Kristol stated, in a jaw-dropping display of ignorance, that, "It's pop psychology that somehow the Shi'a can't get along with the Sunnis." As for his assessment of the cost of the Iraq war: a mere $100 million.

Not that Kristol loves fighting in wars himself. As one of the nation's most prominent chickenhawks, Kristol wanted no part of putting himself in harm’s way. Though he was of age and healthy during the Vietnam War, he declined to volunteer. War, for Kristol, is best fought by the less-privileged classes who are not destined for the Ivy League. As son of Irving Kristol, the godfather of the neoconservative movement, Bill was always destined for less gritty environments.

Bill Kristol speaking out against a possible American military entanglement isn’t going to happen. His response to any proposed American military response is automatic, like a fire alarm going off at the first whiff of smoke. Bill Maher, in the process of gutting him during his ill-advised appearance on Real Time, asked Kristol, "Have you ever met a war you didn't love?" He could only smile weakly in response, a satisfying change of pace from the annoying smirk he usually displays. Maher then went on to mention some of Kristol's prognostications on the Iraq war, which included saying there would be vindication when WMD were found, and also that there were few wars the US was better prepared to fight than in Iraq. I half-expected someone on the set to bring out some smelling salts for Kristol at that point. Maher had put the shrill popinjay's utter fraudulence on full public display, and it made for some great television.

Now that ISIS has sprung from the ashes of the ruinous decision to invade Iraq that the Harvard-trained armchair warrior was such a vociferous cheerleader of, Kristol now says Obama will be forced to send 20,000 ground troops in to fight them, which means Kristol wants 20,000 troops sent in. This from the guy who once said, "If we free the people of Iraq, we will be respected in the Arab world." On another front, Kristol is now keening for an attack on Iran. Forget about any lessons the Iraq disaster might offer, as he never learns anything from past failed wars. Many see Kristol's fingerprints on neocon Tom Cotton's recent open letter to the Iran government. The Harvard-educated freshman Senator from Arkansas is Kristol's protégé, and they’ve been known to meet for drinks at DC's Mayflower Hotel. Kristol has admitted to "advising" Cotton on the letter, but the question is why anyone would want Kristol's advice.

Bill Kristol has a lot of useless knowledge that he never turns into wisdom. The Roman poet Horace once wrote, “It is sweet and fitting to die for one’s country." Kristol fully embraces this sentiment, with the caveat that others do the dying for him. Geopolitics is just a game of Risk for him, and he uses his ideology to insulate himself from the brutal suffering that war causes. Kristol is drunk on war, and he never gets a hangover in the morning because he wakes up and just keeps on drinking. It should come as no surprise that the son of Irving Kristol would turn out this way. After all, if all you have is a hammer, everything looks like a nail. "Imposing democracy" and "nation building" were probably discussed at the Kristol family dinner table as casually as the weather. I doubt that Kristol even has the courage to ride the "R" train at rush hour in NYC, and it's clear this shameless warmonger lacks any moral authority to call for the elective military conflicts he champions.