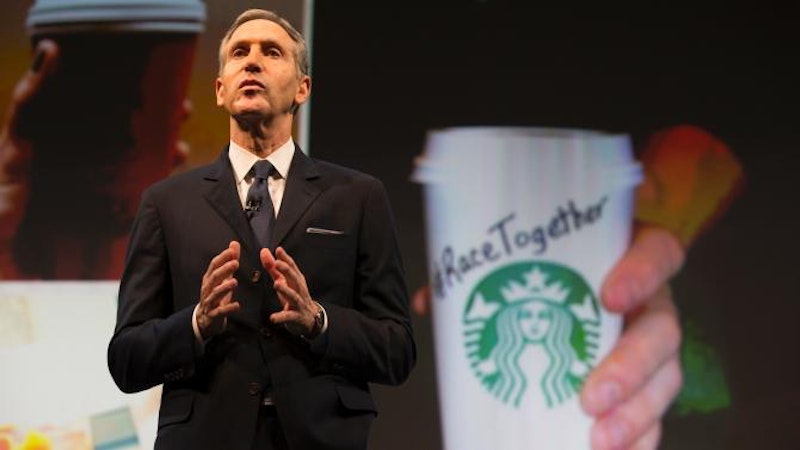 “One race: human,” tweeted Starbucks' Senior Vice President for Communications. That did it. “Easy for you to say[,] mayonnaise boy” was a tweeter's response.  Another tweeter, tapping her foot, said, “Honest: did you ask a single non-white person what they thought?” The great pile-on had started and it's been going all week: everybody on social media is educating the hell out of Starbucks because of the company's Race Together initiative. Here's a voice: “Unwittingly legitimizing the view that humans can be divided into separate races risks doing more harm than good in the long run.” That's from a concerned journalist who doesn't think baristas should talk about race when scientists say race doesn't exist, that there are no races. Perhaps the Senior VP will sit upright at this point, his finger jabbing. He said that!

“We are simply trying to raise the awareness, the level of empathy and compassion necessary to bridge the cultural divide,” says Howard Schultz, CEO of Starbucks. Schultz wants to do some consciousness raising and spur people to talk out “the divisive role unconscious bias plays in our society.” Most of those snorting at Race Together have taken the line that consciousness ain't the issue at hand, and the same for empathy and compassion. America is rigged against dark people, they say, and that's the case no matter how many nice whites the dark people may encounter. A decent conversation about race, in their view, is one that centers on this point and lets all others drift into the background. What goes on in the head of the individual? Secondary. The Twitter chorus has been steaming about the entitled suburban doltishness that could cause anyone to think otherwise. Of course, until Schultz spoke up, attacking unconscious bias was quite a thing. Challenging people (mainly whites, I guess) to get at their ground-in, unsuspected bigotry was an ongoing joy for many of the enlightened. Maybe next week it will be back.

Luckily, Starbucks' giant gaffe reduces to little in practice. Baristas are being told how great it is to write the phrase “Race Together” on a customer's cup, the idea being that the phrase will cue a customer-barista discussion about race. But the baristas don't have to write it, Schultz says, and I bet they won't. They're busy and they know the line has to keep moving. The company isn't keeping tabs on their “Race Together” cup writing or their racial-chat levels. Schultz doesn't want to be overbearing or pious. “We don't want to be intrusive on any level," he said after the country began rolling its eyes and snorting at his new project. He had taken the same line when unveiling his plan in front of a grand conclave of employees.

The one operational difference you'll see is that the pile of newspapers near the creamers will now have copies of a USA Today “Race Together” special section. A rival newspaper tells us the section “contains an assortment of statistics and facts about race, and ends with a questionnaire that prompts readers to ask themselves how many friends of a different race their parents, and they themselves, have had.” Starbucks tells us the section will also have “an unconscious bias experiment—exploring the attitudes and beliefs that guide us, along with an interactive diversity index that asks 'what is the chance that the next person I meet will be different from me?'” But customers don't have to look at the section or do the exercises. Nobody actually involved in Race Together has to do anything at all.

Given that, you might wonder how Schultz convinced himself the initiative was so weighty. Yet his chin lifts when he speaks of it. “We at Starbucks should be willing to talk about these issues in America,” he declares. “Not to point fingers or to place blame, and not because we have answers, but because staying silent is not who we are.” No, we are people who provide newspaper supplements with quizzes.

I think Schultz can sell himself this con because he's a CEO. Consider the following quote. Swatting away any claim that Race Forward was just marketing, Schultz said, “This is about one thing: to use our national footprint and our scale for good.” All that coffee passing across so many counters, so many people handing over paper coffee cups, so many people receiving them, and surely... well, surely some of the people could just say something about race, share a few thoughts, and enough of those somethings would really add up.

When you're high enough up the ladder, plans like this make sense. It's all in the view. Down here, at least we'll have the USA Today supplement. Eight pages long, next to the sports section from last Wednesday. Look for the interactive diversity index.