Politico takes a sketchy look at the Democrats' rising star. 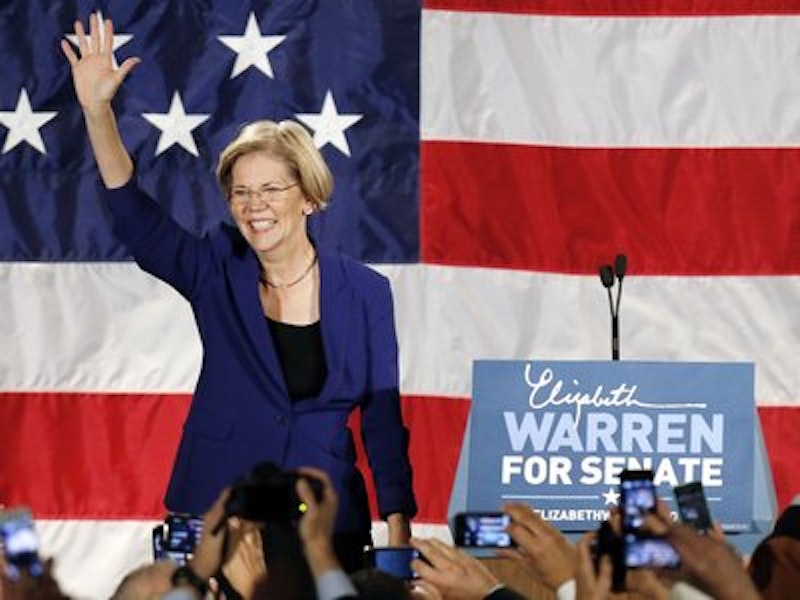 When it comes to staffing the Treasury Department, Elizabeth Warren “has veto power over any nominee for the next two years,” says a “former Treasury official.” That's the biggest bit of news in Politico's 6000-word profile of the Massachusetts senator. Here's another: Bill Clinton wouldn't campaign for Warren in 2012. One reason was the candidate's attacks on Wall Street honchos from his team (“a former Clinton aide tells us”). Another was that Warren keeps bringing up the Bankruptcy Act of 2001 and how Hillary voted for it.

No source on that last claim, though “someone close to her” tells us Sen. Warren is “worried that Hillary and her people are still too damned close to Wall Street.” We also have somebody to express the current administration's attitude toward Warren: “a top adviser to Obama” says, “There's a loyalty question with Liz.” Warren has her Treasury veto power because she shot down the guy who was going to be third-in-command at the department, according to “a former Treasury official.” And she played a big part in shooting down Larry Summers as potential Fed chairman, “several people told us.”

In the Senate, Joe Manchin sounds bitter. “Sooner or later, you have to go produce something,” says the West Virginia Democrat, who tried to pass a student loan bill that Warren didn't like. Warren's record in the Senate, as described by Politico, comes down to this: if somebody gets a compromise going on one of her issues, she will declare the compromise not good enough and leave everybody feeling unhappy. Is that because she's difficult or because Congress is geared toward producing horribly awry, bent-logic compromises that favor the wrong interests? Could be both, of course. Could be whatever, because Politico's writing on policy is rather spongy.

Politico: “But Warren believed the compromise rate didn’t go low enough for students and pushed back, introducing a bill that tied the reduction to a tax on millionaires—a poison pill that ensured GOP opposition.” Obama backed her, and the bill didn't get past the filibuster. I find the core of this story to be a muddle. Why did she think lower rates were doable? And what was her announced reason for bundling the millionaire tax with the reduced student loan rates? Politico makes it sound like she wanted to replace Manchin's passable bill with an unpassable one; that's what “poison pill” suggests. But the writers may just mean deal breaker. Beats me.

Here's a throwaway: “Her populist appeal permits her to campaign in red states Obama couldn’t set foot in, like Kentucky and West Virginia.” Sounds promising for a Harvard professor. Voters there shouldn't like her, but they look past her blueness because of what she has to say, the “populist appeal” business. Wall Street and the banks have made such widespread—not to say rampaging—change in the lives of so many helpless people that issues like red versus blue have faded out a bit from the victims' thinking. A Harvard professor doesn't seem so elitist after you deal with somebody who takes away homes.

Or maybe Obama is a tricky standard for Politico to use. As president he's a lightning rod, a black lightning rod. Obama may not be welcome in the red states, but how about Kristin Gillibrand or Joe Biden? I don't mean they'd be star attractions, but would nobody in Kentucky and West Virginia ever want them campaigning? Maybe Warren gets a bigger red state response than they do, as in more invitations, more money raised. Maybe no one else gets invited, and Politico should have said Warren is the only blue state Democrat in demand by red state audiences. Never mind. Next we're on to Harry Reid; the “sly, strategizing” Reid wants the Massachusetts senator inside the tent.

The article's opener is Warren meets Hillary, the birth in a 1998 hotel room of the “complicated, tense and still-evolving relationship between the two strikingly dissimilar women atop the Democratic Party in 2015.” The anecdote is the one lively bit in an article that wants to be lively, and its only source is Warren.

The first lady was in Boston, and her staff tapped Warren as a Harvard wonk who could brief Clinton on the bankruptcy legislation being pushed that year. Hillary ate (“tucked into”) her hamburger and fries, and Warren held forth. “To this day, she isn’t sure Clinton quite knew who she was,” Politico tells us. Clinton was a quick student and caught fire as Warren described the legislation's badness. Warren remembers the first lady saying, “We need to stop that awful bill!” Warren: “There were skid marks in the hallways of the White House from advisers changing their positions after Mrs. Clinton got involved.”

But the Senator finishes up the story this way, back at the hotel: “She whips me outside of this tiny room… and she says, ‘PICTURE?’” Politico notes that at this point Warren “impersonates Clinton by raising her voice to a crescendo.” So Warren makes a show of it. Does she do the face? Hard to play that scene—you get whirled around, you and a politician are in a snapshot—without doing the politician's fixed-face, rictus grin. I guess Politico would tell us if Warren made a Hillary face. Then again, they could tell us why Warren has such a problem with the 2001 Bankruptcy Act. Hillary's vote for the act “set the stage” for her complicated, tense, evolving relationship with the senator, Politico says. But the only thing we hear about the act itself is that it had “limited protections for women and children.” What is Elizabeth Warren so mad about? Don't ask Politico.