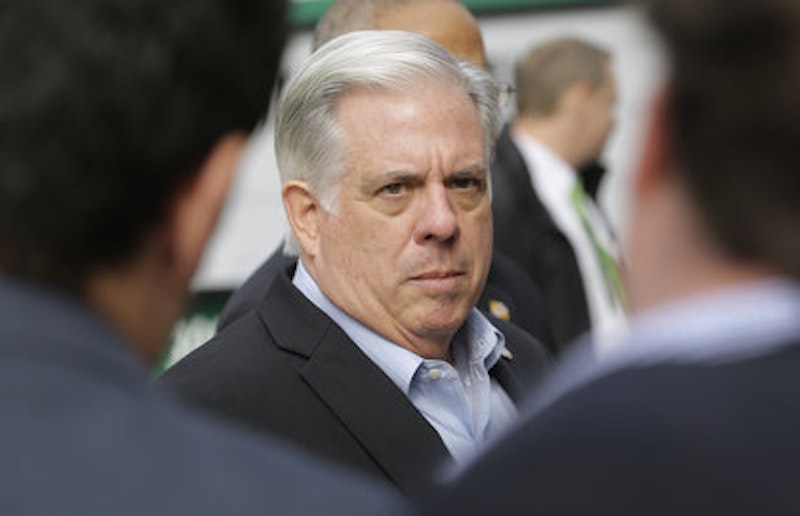 The Maryland General Assembly, usually nobody’s idea of bipartisan bonhomie, may save Republican Gov. Larry Hogan from his death wish of cutting taxes. The Democrats’ lifeline is not so much a gesture of friendly cooperation but more to preserve the fiscal integrity of the state as well as to salvage established Democratic programs. In doing so, Democrats are, ironically, handing Hogan the best of both worlds—a safety-catch budget and bragging rights over keeping campaign promises.

Hogan’s campaign pledge to cut taxes could become little more than a munificent gesture in a pauper’s will. Democrats have already blocked two of the taxes he planned to cut, the bugaboo rain tax and the part of the gas tax that’s tied to inflation. In doing so, with Triple-A bond rating intact, they have taken steps to prevent Maryland from the fate of other states where Republican governors have cut taxes only to create huge deficits.

The nearest and direst example is New Jersey, governed by Republican Chris Christie, Hogan’s friend and political patron. New Jersey’s government structure, unlike Maryland’s, is a patchwork of many townships and municipalities that rely on the state for funding. Christie fulfilled his original campaign promise to cut property taxes. And now New Jersey is $7.3 billion in the hole, its credit rating has been downgraded eight times and the state is under court order to repay $1.57 billion it borrowed from the state’s pension fund.

Recently, New Jersey won an $8.6 billion tobacco settlement. But Christie, eager to collect money immediately, agreed to accept three cents on the dollar, or $250 million, to help repay the borrowed pension money. But New Jersey will get only two-thirds of the $250 million. The law firm that represented the state will get the other third as its commission.

The most publicized example of turning a tax cut into a deficit occurred in Kansas. Republican Gov. Sam Brownback tried to showcase the exemplar of trickle-down economics whereby cutting taxes would boost revenues. The opposite, predictably, occurred under the largely discredited theory of less is more. Kansas wound up with a $1 billion deficit. Brownback, though, was reelected.

Ditto Wisconsin, which has a $2.2 billion deficit. There, Republican Gov. Scott Walker, who’s issuing the noises and motions of a presidential candidate, cut taxes by $541 million and busted unions in one swoop in a nominally Democratic state. Yet Walker survived a recall election and was eventually reelected to a second term.

Similarly, Gov. Bobby Jindal cut taxes six times in Louisiana, including the largest income tax cut in state history. The state faces a $1.6 billion deficit. And in Pennsylvania, Republican Gov. Tom Corbett, who was defeated in November after one term, awarded huge corporate tax breaks at the same time he cut the state’s education budget by $1 billion—the same maneuver Hogan is trying to finance most of his tax cuts.

In all, 16 states are currently dealing with budget deficits—including Vermont, Rhode Island, Arizona and Washington State—most of them because taxes were cut without accounting for accompanying drops in revenue. Forty-nine states require balanced budgets. Only Vermont does not.

The fear in Maryland is the primal scream of self-preservation. Democrats not only want to preserve their political majority but also want to avoid joining the states in the deficit column because of tax-cutting promises and policies that have proven to be unworkable such as supply-side economics. Less is not more. It’s still less.

Hogan’s fiscal policy is lifted right out of the orthodox Republican playbook: Cut funds from public education and spread the proceeds among charter schools, business and other targeted interest groups. Hogan had originally proposed funding his tax cuts by reducing spending on education by $140 million, cutting Medicaid and by cancelling state employee pay raises and COLAs. But the Democratic legislature is not a willing partner. If allowed, the cuts would strike directly at the party’s largest constituencies, teachers’ and public employee unions.

And even Comptroller Peter Franchot, who heads the Board of Revenue Estimates, warned that revenue collections are flat and the cuts would push Maryland closer to the red zone. Franchot, who also serves as an officer of the state retirement system, also warned against any future tampering with pension funds.

Budget-making in Maryland is a $41 billion shell game. And here is how the game is being played. The legislature can only cut the budget, not increase it. Nor can the legislature shift funds among programs.

The legislature has said no to Hogan’s proposed tax and budget cuts. So the legislature makes its own cuts to the budget, in theory to restore the budget cuts that Hogan has proposed, i.e., education and state employee pay increases. The House and the Senate usually construct their own versions of the budget and, more often than not, blend their decisions when there are no sharp disagreements. Essentially, they’re recycling money.

The House has already processed its rendition of a face-saving budget. It found $218 million scattered through the budget to cover education funding and pay raises as well as another raid on the pension fund which helps cover restoration of Hogan’s cuts.

The legislature’s version is then negotiated with the governor who, under Maryland law, has the final say on the budget—hence the name executive budget. (Footnote: The executive budget system was adopted in 1917 after the General Assembly spent the state into bankruptcy.) Once an agreement has been reached, the adjustments are made through budget amendments or supplemental budgets. The budget must be adopted by April 6—a week before the session’s final day of April 13—or the clock starts running toward an extension of the session.

Realistically, Hogan will get little or nothing he wants as originally proposed, especially the tax cuts. He may very well win some variation of the rain tax repeal, likely a local option to give the 10 affected subdivisions a choice of how to pay for waterway clean-up—the version offered by Senate President Thomas V. Mike Miller (D). Hogan has said he doesn’t care whose name is on the bill as long as the job gets done.

Either way, Hogan wins. He can boast that he fulfilled the promise on which he was elected. And in the case of the other tax cuts he proposed, Hogan can say he tried but was thwarted by Democrats. And the Democrats can snigger that they were being responsible lawmakers when they saved Hogan and Maryland’s budget from a catastrophic blunder. And that’s the way democracy in action works: Everybody walks away with their faces saved and their egos intact.