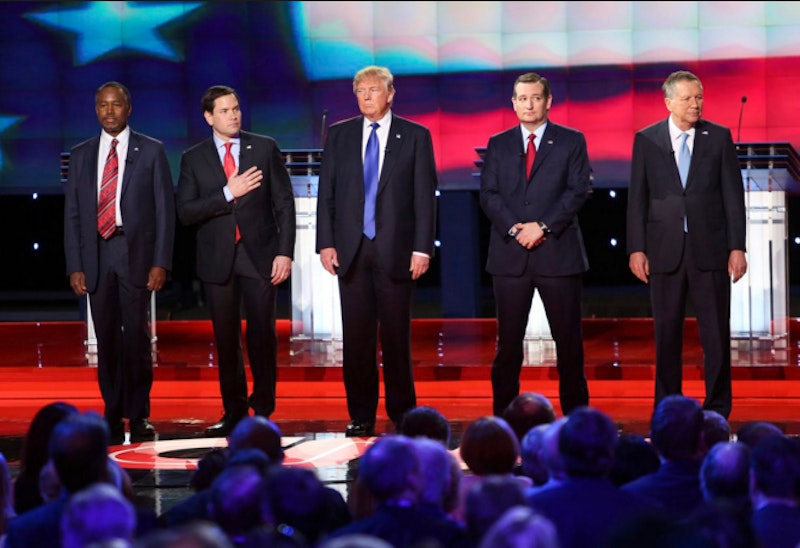 The Dance of the Three Podiums started about 10:30 p.m. Donald Trump was in the middle, Ted Cruz and Marco Rubio were to either side of him, and all three had their arms going. Their hands were in motion, but different sorts of motion, and the effect was like a dance staged by somebody steeped in the avant-garde. Little Rubio had his body slanted away from Trump while his arms gestured toward the big man, as if Rubio were an M.C. introducing an act that frightened him. Trump, the monolith, hunkered over his podium and gestured only by letting his hands flip briefly from the podium’s sides, for emphasis, before they gripped it again. He did a lot of this flipping, like a pulse. Cruz gestured too. I forget how, but his hands were right in there.

The soundtrack to this passage was a blending of three voices. It went like this: “I’ve been watching it all my life… You are all talk and no action… Then name one specific thing you’ve done… What I’ve seen up here—I mean, first of all, this guy is a choke artist, and this guy is a liar. You have a combination... This guy always goes for... You have a combination of factors. He can’t do it... This is so typical... For the obvious reason, and he can’t do it because he doesn’t know how to tell the truth.

“Other than that, I rest my case.”

In a formal touch that struck me as pedestrian, the passage was rounded off with the words “Governor Kasich, you have the floor.” The Governor proceeded with a solo showcasing his particular idiom. Kasich’s hands seem too big for his body while not being big enough for anything else. His body is small and his head is big, and typically he stands as if pushing his face forward. It’s like he’s saying, “I’m no pee-wee. Look at my big face.” When he gestures, both hands rise up and flop toward each other and away from each other, and they keep doing this until his talk is done. With his little body pulled back, he looks like he’s shrugging toward himself.

Ben Carson maintained his usual stillness. He did have the evening’s funniest bit. Wolf Blitzer fed him the quintessential straight line “Dr. Carson, how would you deal with North Korea?” Carson knew just what to do with it. “Okay,” the doctor said. “Well, first of all, people say that I whine a lot because I don’t get time. I’m going to whine because I didn’t get asked about taxes, I didn’t get asked about Israel. Hugh, you said you’re going to be fair to everybody, you didn’t ask me about taxes.” It’s true, he hadn’t.

The second-best line belonged to Rubio, and it was funny at somebody else’s expense, not the speaker’s. The champion of the GOP donor class has decided to go after Trump, and he’s doing it with attack points (illegal Polish workers, fraudulent Trump University, ties made in China) and at least one good wisecrack: “If he hadn’t inherited $200 million, you know where Donald Trump would be right now? Selling watches in Times Square.” Admittedly, the end to the wisecrack is reconstructed from this viewer’s memory. The transcript in The Washington Post records the finish like so: “(inaudible).” Rubio, even up on his toes and fighting at last, doesn’t carry much force.

The unflappable but odious Cruz pitched in too. Afterward Trump told CNN’s Chris Cuomo that he’d enjoyed himself. The man who squealed for weeks because of Megyn Kelly now appeared quite at ease. A brisk rubdown, seemed to be Trump’s assessment of the conflict. Of course, the Kelly flap came before he won any primaries. Now he’s confident. Donald Trump is ready to dance some more, and that’s a frightening thought.