Ask Not for Whom the Trump Trumps 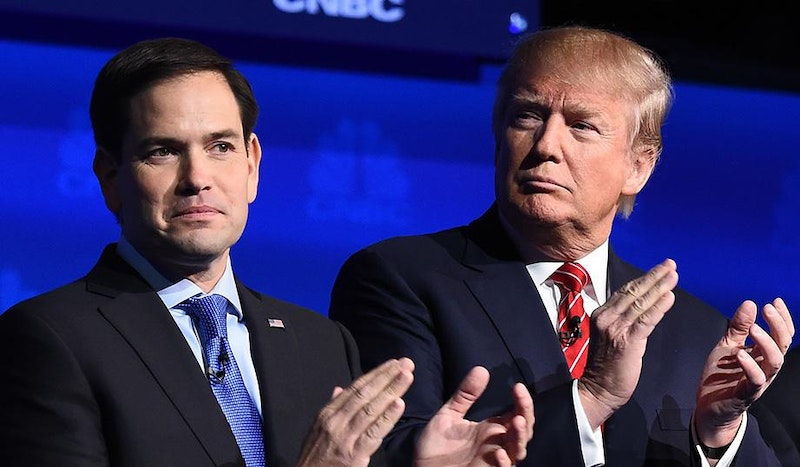 A Canadian asked my view of the elections down here. With lapidary force, I responded, “We’re hoping the Republican Party falls apart. And we’re praying nothing else does.” That was a few months ago. Being a scaredy-cat, I’m now focused on prayer. Forty-six percent in Nevada! Not that I assumed the Donald Trump menace would collapse when people voted. But I did think there’d be a race, there’d be some competition. A maddened Trump might lose enough primaries that he’d huff off and run against the GOP rump. America would be freed of the face-hugging menace known as the Republican Party. Instead America may be freed of being America.

Am I panicking? Sure, that’s what I do. Gallup says 60 percent of Americans really don’t like Trump. Good, but let’s see what happens this fall. If China or Europe or the banks cough up a lung, American voters will decide Barack Obama has poisoned the economy and react accordingly. Or maybe Bernie Sanders gets the Democrats’ nomination and Mike Bloomberg decides to save the country by splitting the anti-Trump vote. Or… I think the point is that none of us know what awful thing might happen. It’s going to blindside us, because getting blindsided is what we do best. But we know what the thing’s vehicle will be. The tank is sitting out front and racing its motor, and it has a big T on its side and a topping of straw-colored hair near the gun turret.

To change metaphors but stay automotive, I realize we aren’t bound to drive over a cliff. But we are driving along a mountain road in the Andes and some idiot has taken up the guardrails. Republicans spent years demonstrating that they couldn’t run a government. Then they spent years fouling up Obama’s attempts to fix their mistakes. Now they’re crippling the Supreme Court. They’re doing all this right when people’s jobs are getting sucked up and sent spinning around the world. Americans are being given very little stake in how things are and little cause for faith that democracy can help. Yes, the Republican bosses deserve to see their voters desert for that fat-assed egomaniac. Maybe the guy in the next apartment deserves to have his furniture scorched because of his shitty hot plate. But I’m in the same building and I don’t want to die.

After months of fumbling, the Republican elite has settled on Marco Rubio as their man. Guess what? Trump leads Rubio by 19 points in Florida. That’s Rubio’s home state. The primary is in less than three weeks, and I’m wondering how Rubio continues after he loses there. But the diehard conservative firebrands on the party’s right will battle Mr. Eminent Domain the same way they fought Obama and his Maoist agenda. Here’s a taste. “In a lot of ways, it might actually be conducive to getting things done to have someone with business sense in the White House,” says a fellow in the House Freedom Caucus.

Thanks, guys. You made democracy a joke and now you’re ready to knuckle under. How does the song go? “It’s Starting to Feel a Lot Like Weimar.”