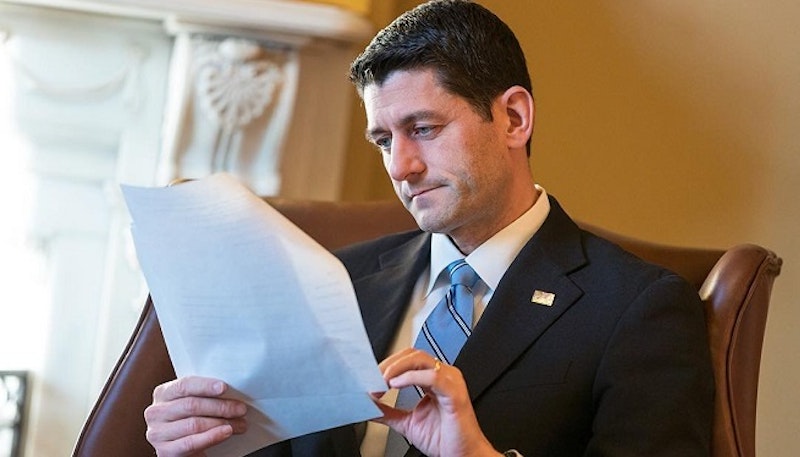 “First of all, I think you should run for president if you're going to be president,” House Speaker Paul Ryan said last week to quash rumors that he might emerge from a brokered Republican convention as the party's surprise nominee. “No way. Ain't gonna happen,” the Wisconsinite said. It would’ve been more comforting if he’d repeated Congressman Mo Udall's riff on Sherman: “If nominated, I shall run to Mexico. If elected, I shall fight extradition.”

Ryan was not nearly so categorical in his refusal when interviewed on Fox News. My take is this wasn’t because he's masking his ambitions but, rather, that he finds the possibility truly laughable. Yet here's what’s troubling: The Republican Party has already drafted him twice before, first to serve as Mitt Romney's running mate in 2012 and then, just last year, to serve as John Boehner's replacement as Speaker of the House. Ryan as the nominee isn't completely far-fetched.

Ryan almost turned the Speakership down, attaching a raft of conditions before he accepted. On domestic matters, Ryan is a budget geek and a spending hawk. Under the right circumstances, he could do some good for our nation's troubled finances. That’ll be a long slog that was made worse by Boehner canceling budget sequestration in his way out of the Speaker's chair.

On foreign affairs, however, Ryan is indistinguishable from the bumbling Bush-Obama-Clinton approach to world problem-solving. He voted for the disastrous Iraq invasion, of course, as did most Republicans at the time and many Democrats, including Hillary Clinton. He was also for any and all buildups of forces in Iraq and Afghanistan. Ryan backed disastrous intervention in Libya (refusing to cut off funds though insisting Obama “owes the American people and Congress a clear strategy”), which created a failed state that’s friendly to al Qaeda, ISIS and other terrorist groups. He and fellow House Republicans are willing to criticize then-Secretary of State Clinton for the lousy security at a Benghazi consulate post-intervention, which contributed to the deaths of four Americans by Islamic militants. But he remains unwilling to criticize the American actions in the country that made that sort of thing practically inevitable.

Now Ryan wants Congress to pass an Authorized Use of Military Force resolution about the U.S. government's anti-ISIS efforts. Such a resolution wouldn’t be an awful idea in a world devoid of politics. If we’re going to make war, even limited war, then Congress ought to declare it. Legislators should not abdicate that power to the president.

However, unless it’s an extremely limited resolution an anti-ISIS military force resolution is risky. It risks exacerbating America's insane two-front war effort in Syria against not only ISIS but also ISIS's enemy Bashar Assad. It risks making the refugee crisis currently roiling Europe even worse. It risks bringing the U.S. into greater conflict with Russia in the Middle East. Above all, an AUMF resolution risks a slow mission creep which will eventually send a substantial number of American soldiers to territory that we vacated only recently, after a long and costly conflict. In poll after poll, the American people indicate that they are thoroughly sick of that approach.

Then there’s the defense budget. America spends far more money on its war-making capability than any other nation, but you wouldn't know that from the stump speeches of GOP presidential hopefuls. They all speak of a hollowed-out military and promise a buildup. We can't afford it. Ryan the budget hawk knows this. He might quietly do something about it as Speaker as he attempts to right the nation's finances. Drafting him as a presidential candidate would be a blow not just to the Republican Party but to the U.S. Treasury as well.

—Jeremy Lott is a senior fellow at the American Security Initiative Foundation.