He’s got the Republicans’ number. 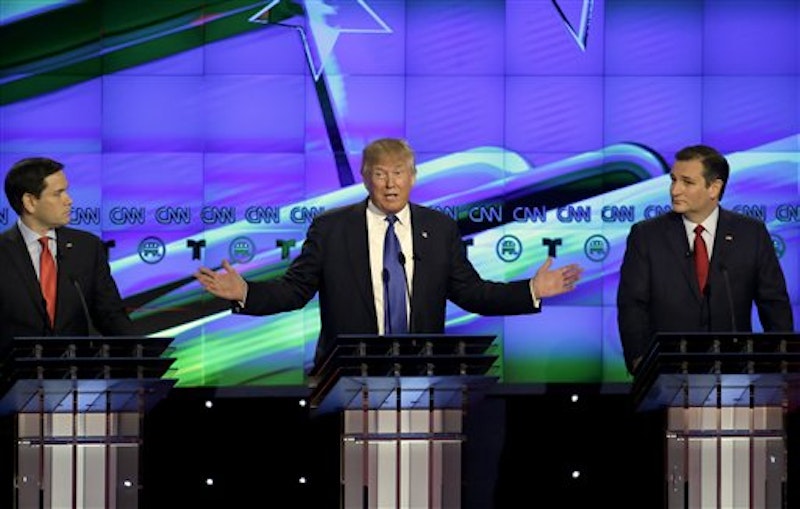 There must be people persuaded not to vote for either Marco Rubio or Donald Trump by watching them yell at each other in last night’s debate. Man. By contrast, it’s sort of cute that Ted Cruz seems to keep smiling while watching Trump—as if Cruz, at least, has enough of a sense of humor to be delighted by Trump’s act. It’d be a healthy change of pace, I think, if Trump and Rubio now became the grumpy ones destroying each other while a happy Cruz rises above.

What the Republican Party really needs, though, is a candidate who loves religion enough to make it through the crazy Republican primaries but loves numbers enough to have an intuitive handle on the terrifying budget situation now looming over America’s future prospects, including a $19 trillion federal government debt. That hypothetical candidate might look a bit like a wonky Kasich with a tiny, mystical dash of Carson. In short, the Republicans should run ancient Greek mystic/philosopher/mathematician Pythagoras.

Pythagoras—some of whose mathematical insights are with us today and, presumably, forever—didn’t just like numbers, he worshipped them. It sounds nutty at first, but he was ahead of his time, really, in realizing that math is everywhere, structuring reality—and yet is a non-physical thing. Math permeates the universe but at the same time is apart from it in some abstract space, challenging our very notion of what it means to “exist.” Though I’m not religious, I was intrigued to learn that with surprising frequency, mathematicians end up intrigued by theology.

Like Pythagoras, they are taken with the idea there might be order to the universe that we cannot perceive with the senses alone. Or, as an atheist like me might put it, once you accept that something as abstract as “the number four” exists, I suppose Aquinas’ “First Mover” of all things being out there somewhere seems less preposterous.

Religion’s not going away—but even Republican primary voters don’t seem to care enough about religious specifics to insist Trump talk about Bible stuff. Maybe, with some key hyper-literal social-conservative battles such as gay marriage having basically been lost already, it‘s a good time for the transubstantiation, so to speak, of religious issues into new, more abstract forms. I often lament that the U.S. might have been saner had the influence of Deism—that simple faith so stripped down and science-like it makes Unitarianism look traditionalistic—grown faster in the early days of the republic. Perhaps now is a good time to recapture a bit of that New England-like, rationalistic tone.

After this strange primary season, the Republican Party could do with a turn toward the rational. I think Pythagoras would understand, if he were with us now and running for president, that numbers are numbers even if spoken softly. There is no need to shout an equation or bellow a variable. May committed, calm, intellectually-honest, deeply inspired bean-counters decide our fates, if someone must.