Donald Trump Is The Beatles of Politics

The key to understanding Trump is to think of him as a phenomenon like the Fab Four. 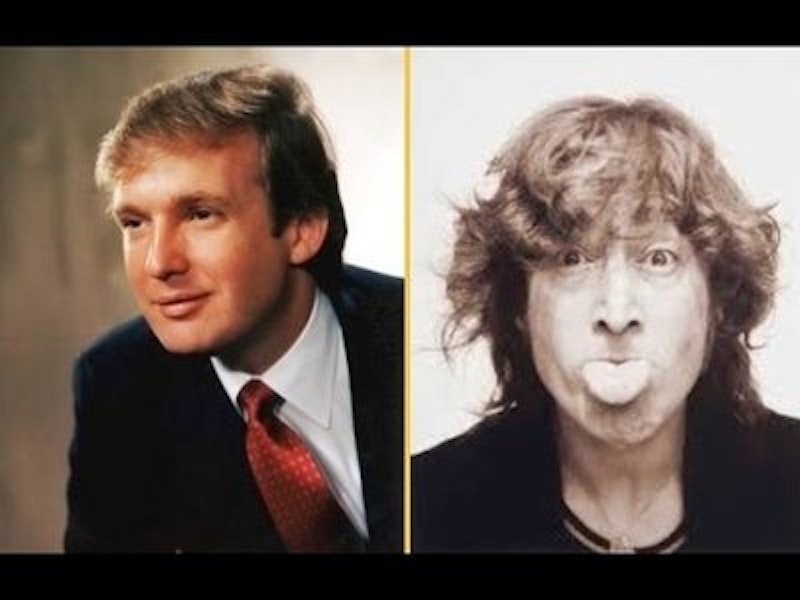 Donald Trump loves a lot of people and, if you ask him, everybody loves him back. "The blacks," Latinos, women—anyone who's not a "loser" finds the tycoon irresistible. Lately, he's turned his love light on the people of New Hampshire, South Carolina, and Nevada, who’ve handed him three straight victories. High on adrenaline after his latest win in Nevada, Trump gave an unusual shout-out to a group not normally so enthusiastically embraced by a politician: the uneducated. Crowing about all the demographic groups he's won over—including evangelicals and the highly educated—the Republican front-runner added this new group to his love list, adding, "I love the poorly educated!"

It was an inadvertently hilarious thing to say, but also condescending. Not to a Trump supporter, however. It’d be interesting to know what went on in the minds of those who happen to be poorly educated when they heard his most recent one-liner. Did they appreciate the fact that Trump recognized them explicitly, giving them some love, or did they just assume he was talking about someone else? Regardless, it's not going to give them pause. He's already said he could shoot someone on 5th Ave. and no one was insulted, so this is nothing. It trended on Twitter for half a day, and that was it.

This latest remark is getting played for laughs by Trump's detractors, which helps them disguise the deep uneasiness his candidacy evokes. They certainly can't use it against him, as he's just expressing support, however awkwardly, for the dispossessed. The line Trump must cross to end his unlikely run is way beyond where anyone first thought it was when he made that remarkable speech announcing his candidacy back in June. John Lennon showed exactly where that line is for Trump when he said in a radio interview in 1966 that The Beatles were more popular than Jesus. That's when all hell broke loose. Radio stations refused to play Beatles records, some of which were burned in public by outraged Christians. Suddenly, out of the blue, the Beatles looked vulnerable.

Lennon ended up apologizing, which couldn't have been easy, and the controversy died down. Brian Epstein, the band's manager, probably talked him into it, as the Beatles juggernaut had reached an impasse.

It doesn't matter what other allegedly offensive things the billionaire candidate says from now on, as long as he doesn't proclaim just one thing: that he's more popular than Jesus. Hell, given Trump’s weird allure, that might actually help him. The key to understanding Trump is to think of him as a phenomenon like the Beatles, as opposed to merely a candidate. Like the Fab Four, he's is an "outsider" too, and just as being British added to the band’s appeal and freshness, Trump not being a politician confers some exotic allure upon him. After around 1964, it didn't matter what kind of music the Beatles played onstage. It was so loud they couldn't even hear what they were playing, and their fans, especially the girls, didn't care.

Trump is now like the post-1964 Beatles. Trump just takes the stage for debates and stump speeches and wings it. No need to prepare because he's learned, like the Beatles did, that it doesn't matter any more. Beatles fans in the stadiums weren't reacting to the actual music that was being played onstage. They were responding viscerally to the magical persona the band had created, rendering the notes they played of secondary interest. This is the essence of superstardom, and Trump has done the same thing. His fans in the stands are there to see a star. Their star doesn't have to hit more than a few good notes and they're more than satisfied. The bad ones are forgotten as quickly as was a Lennon-McCartney harmony that fell a little flat.

Much of Trump's appeal springs from a need many American people (especially very religious ones) have for a strong leader who will "take charge.” This makes them feel safe. This group is happy to accept Trump's regal posturing (made more palatable by the "kid from Queens" aspect he still retains) and air of superiority in exchange for him carrying out all his vague promises to make America great again. This is one reason a nominally Christian candidate does so well with evangelicals. If they can't have an all-powerful God himself as president, Trump, with his private jet and his $8.7 billion fortune, is seen as the next best thing.

Tiger Woods was always a front-runner on the golf course. He didn't win major tournaments on Sundays unless he was ahead after his round on Saturday. Trump’s is the same. We got a glimpse of this after he lost in the Iowa primary and mysteriously went off Twitter as he licked his wounds. Now he's become dangerous.