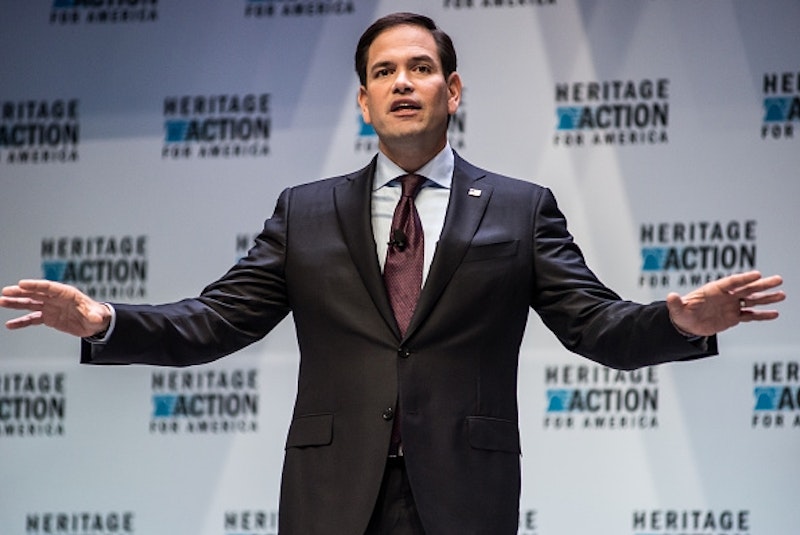 Donald Trump is better at this stuff. For one thing, he has a bigger voice. For another, he likes making fun. It’s as natural to him as to a 12-year-old telling another 12-year-old the dumb thing the spaz did with his tray in the cafeteria. Trump throws in touches that aren’t even mocking, just vivid. Reliving Chris Christie’s destruction of Marco Rubio, Trump abruptly plants his elbow on the podium and his jowl on his fist. “And Chris was sort of cool, because he was like this,” he says.

Rubio doesn’t have that range. Laying into Trump, he acts out how the Big Anus wind-milled his arms while conferring with an aide. But Rubio’s arm just wags; compare Trump’s silent movie rendition of Rubio gulping from a water bottle. Still, the little man can play. Like Trump, he realizes no target is too small. Typos in tweets, for example. “Let’s read some,” Rubio told a crowd on Friday. “You’ll have fun.” The senator proceeded with “Leetweight chocker Marco Rubio looks like a little boy on stage,” the first two words being the result of Trump’s clumsy typing. (Actually the Big Anus typed “leightweight,” but Rubio pronounced it “leetweight.”) Rubio also dished with the crowd about Trump’s off-screen activities at the most recent debate. “First, he had this little makeup thing applying, like, makeup around his mustache, because he had one of those sweat mustaches,” Rubio said. Trump also wanted a full-length mirror. “Maybe to make sure his pants weren’t wet,” the senator said. Hey there!

Remember the old Rubio? That first debate back in Cleveland, he was the cheerleader. “Well, first, let me say I think God has blessed us,” he announced, puppy eyes lifting wide. “He has blessed the Republican Party with some very good candidates. The Democrats can’t even find one!” Now the little bitch is smirking over Donald Trump’s misspelled tweets. How could the nice young man change gears like that? Well, he did it before. Back in September, Rubio took a break from Boy Scout duties to prepare some Trump fillet. First, Rubio told an interviewer that Trump didn’t seem to know enough to be president. Trump responded by commenting on Rubio’s sweat, his finances, his water-drinking, his Senate attendance and his disloyalty to Jeb Bush. At this point Rubio broke into a deadly purr. “He had a really bad debate performance last week,” he said of Trump on a radio show. “He takes shots at everybody that gets anywhere close to him, in terms of a poll. Or anytime he hits a rough spot, that’s what he does.”

Rubio took his act to Bill O’Reilly’s TV show that same night, filling in for Trump because the Anus had canceled. Rubio confided to O’Reilly that Trump was “thin-skinned and sensitive to criticism” and also kind of ignorant. “He can’t have a conversation about policy because quite frankly he doesn’t know anything about policy,” Rubio said. The Senator pointed to the candidates’ most recent debate. “I think when the debate turned to policy, he stood still,” Rubio said. “That’s why he had a bad debate and acting the way he is and continuing to offend anyone who criticizes him.”

Back at the time, the holding still bit got me. It was the kind of thing Trump might point to, or at least Trump on top of his game. Holding still suggests fear, fear that wants to hide itself. We all spot these tells. They make up the subsoil of social life, the things you let alone. People don’t talk about this stuff, let alone politicians. But Trump does and it turns out that Rubio, the choirboy, did as well. He could also pull off the sort of sniping about career that Trump goes in for, as with the remarks about Trump’s alleged post-debate difficulties.

Then he stopped. The Trump-Rubio feud was discontinued for mysterious reasons. Next Trump was on the warpath regarding the Bushes and 9/11, then Ben Carson’s freewheeling life history. He never really got back to Marco, who reverted to cheerleading when not sparring with Ted Cruz over immigration. At the time it seemed to me that Trump figured the hell with it. Rubio wasn’t high in the polls, nor did he provide easy fun; might as well lay off. Why Rubio let go is another question. Maybe he was hoping donors would like the sight of a candidate who could Trump with the Trump, but then he found the donors weren’t looking for that.

Now Rubio is talking about Trump’s sweat mustache. Trump is happily bellowing back that Rubio is a “like a little frightened puppy.” Trump has the advantage, in part because Rubio does seem like a frightened puppy. But if Trump the candidate dies it will be by a thousand cuts, many of them near the groin. Time to get started.