Amelie Wen Zhao cancels her debut novel because it's not woke enough. 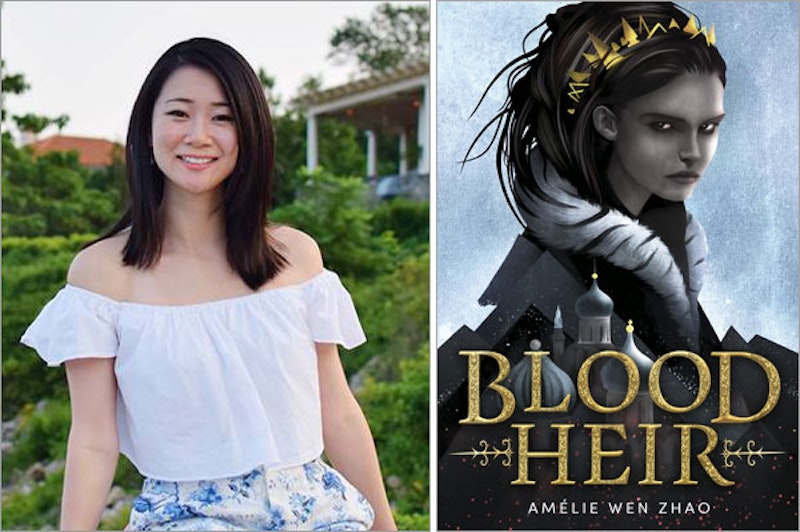 At the time, the young author naively believed that her publisher, Delacorte, was the final arbiter of whether or not her book would advance beyond the galley stage. For any book in the YA (young adult) genre to achieve that these days, it must first pass muster on something called “YA Twitter,” a self-righteous, humorless brigade of Culture Cops prone to backstabbing who’ve somehow ended up as the gatekeepers of the fantasy stories that young minds are allowed exposure to.

Chinese-American Zhao, who moved to the U.S. when she was 18, has learned how powerful and arbitrary these Thought Police are. After being hounded by the tireless enforcers of correctness, the author finally decided to ask Delacorte to cancel her debut sci-fi/fantasy novel, Blood Heir, originally slated for June publication.

Zhao's also issued an apology for her book's lack of sensitivity about slavery in America, even though she drew upon slavery as she's seen it exist historically in Asia—where there are few black people—to write it, and despite the fact that Blood Heir's a depiction of a fictitious world where “oppression is blind to skin color.” That's not a conceit an author can entertain today, because the authorial imagination must now conform to a particular narrative.

Score one for the progressive authoritarians, and one against future authors who’re now subject to this unfortunate precedent. It is however, a big win for “sensitivity readers,” who scour manuscripts for possibly offensive material. Perhaps the author will hire a few of them to help her clean up her Thought Crimes so the mob will allow an acceptable form of the book to be published.

Weighing in on this topic, among others, was Noah Berlatsky, a deputy sheriff with a quick trigger finger who’s also a contributor to Splice Today. A Twitter conversation Berlatsky had with writer Cathy Young is typical of the confused, and dishonest, discourse his group is prone to. Young had expressed relief that, when she'd had her book published, nobody tried to bully her into revising it. Berlatsky responded that, based on Zhao’s compliant words, the author had found all the feedback “helpful.” Right. I suppose the author’s also happier now that she's been educated by her superiors than if they'd allowed the book’s publication, because how important is fulfilling a dream when you have an opportunity to learn so much from enlightened enforcers like Berlatsky?

Cathy Young was frustrated and said facetiously that it's too bad there wasn't a time machine to take Berlatsky’s crew back to the Soviet Union, where they’d feel at home. Berlatsky, mustering the performative outrage that fuels him, replied that she was suggesting that they be thrown in the gulag and was “wishing people would be tortured because they disagree with you,” even though Young had said nothing about the gulag and doesn’t want to see anyone tortured.

This is a story about an immigrant from a communist country where speech is controlled, and coming to America to find a situation that sometimes resembles her birth nation's notorious Cultural Revolution under Mao Zedong. In the 1960s and 70s, offenders were abused both emotionally and physically by groups of citizens until they relented and apologized. Maybe those apologies sounded something like this one: “I don’t wish to clarify, defend, or have anyone defend me. This is not that; this is an apology.” That's Amelié Wen's apology, about as abject as you can get. That's also how victims of the cultural revolution’s “struggle sessions” talked, but I suppose Noah Berlatsky believed those people were also grateful for the “feedback,” because who doesn't appreciate a shaming from the super woke?

The Culture Cops are cruel dream-killers who brook no dissent. They understand that a small but noisy and angry contingent on Twitter can exercise tremendous power, and take full advantage of it. Zhao, an official Woman of Color (WOC), earned a lucrative three-book deal through hard work and determination, but the pitchfork-brandishing shaming committee on Twitter deemed her work to be “anti-black” after viewing some excerpts that were circulating online. Books were once burned in less “enlightened times,” but now the same goal’s accomplished without even having to a light a match.

The Cultural Revolution is one the darkest periods in Chinese history, but for some reason the Left has decided it offers instructive potential. Had Zhao published her book, she'd have been the target of an organized harassment campaign that would include death threats and emotional abuse. The Thought Police are vicious.

It's unfortunate that Zhao has chosen to apologize and thereby empower the Culture Cop mob. The only way to defeat bullies is to take them on. This sentence from her apology is particularly chilling: “I recognize that I am not writing in merely my own cultural context.” That's the way people sound when they've been indoctrinated by blunt force—when they've been worked over. That's how they sounded during the Cultural Revolution. Welcome to the new progressive Cultural Revolution!