If anything, the NATO intervention saved lives. 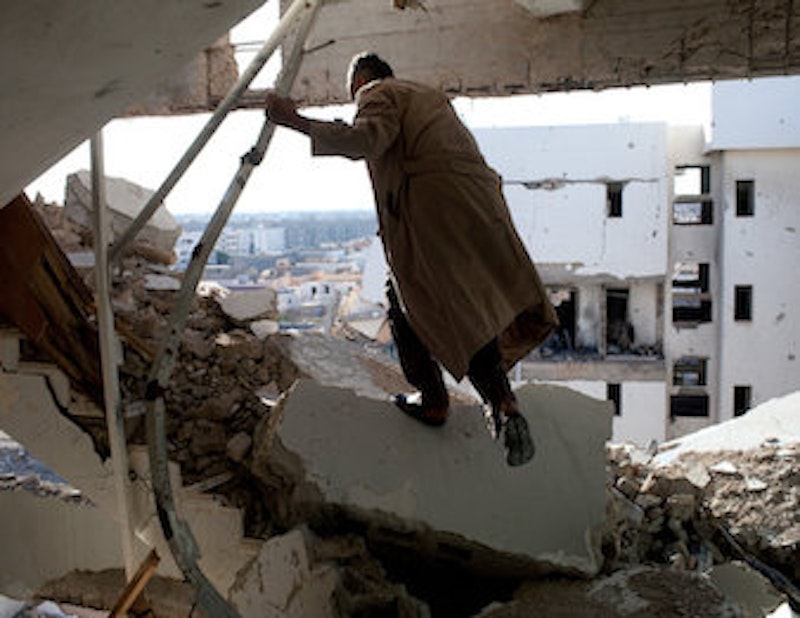 Last month, Mehdi Hasan rewrote Mike Pompeo’s Cairo speech in The Intercept. If Pompeo “truly wanted to be ‘blunt’ and ‘honest’ about U.S. involvement in the Middle East since 1945,” he would have explained that the “post-war history of our role in this region is clear, undeniable, and shameful.” But when Hasan gets to the NATO intervention in Libya, it’s clear and undeniable that the article isn’t an attempt to illuminate the accurate history that Pompeo ignored—it’s just a way to blame the United States for as much as possible.

There are many cases in which the U.S. deserves every last syllable of condemnation it receives—from its support for Saddam Hussein as he waged a genocidal campaign against the Kurds in the late-1980s to its unblinking partnership with Saudi Arabia. But the Libya intervention isn’t one of those cases.

After noting that NATO originally intended to protect civilians from a potential massacre in Benghazi, Hasan explains that the “operation morphed into a non-U.N.-sanctioned plan for regime change in Tripoli. Col. Muammar Gaddafi was raped and killed in the Libyan desert by U.S.-backed rebels. My predecessor Clinton greeted the news with a laugh. ‘We came, we saw, he died,’ she declared.” (Remember: this is supposed to be a speech for Pompeo.) And what a disaster it has been, thanks to the west: “Today, Libya is a ‘Mad Max’ hell-scape, with open-air slave markets and multiple, warring ‘governments’ and militias. It has also become a major transit point for tens of thousands of migrants heading for Europe.”

In a 2016 article, Hasan’s colleague at The Intercept, Glenn Greenwald, attacks Clinton for “sociopathically boasting” about the “grand Libya success,” explaining that the intervention actually destroyed the country: “Since then, Libya—so predictably—has all but completely collapsed, spending years now drowning in instability, anarchy, fractured militia rule, sectarian conflict, and violent extremism.”

Hasan and Greenwald always seem to forget that the country was already plunging into civil war before the bombing started. In early 2011, more than 1000 people had died in just a month, an armed opposition was launching attacks on the regime (after Libyan forces had massacred peaceful protesters), and Qaddafi announced that he would wage a campaign “inch by inch, house by house” to exterminate the “cockroaches” who resisted him.

At the beginning of his article about Pompeo, Hasan cites Shadi Hamid (a senior fellow at the Brookings Institution) who described the Cairo speech as “as one of the worst foreign policy speeches I’ve witnessed from a senior U.S. official.”

Hamid is also the author of a 2016 article in which he defends the intervention in Libya. As he puts it: “We should compare Libya today to what Libya would have looked like if we hadn’t intervened. By that standard, the Libya intervention was successful: The country is better off today than it would have been had the international community allowed dictator Muammar Qaddafi to continue his rampage across the country.” While Hamid rightly argues that the international community’s abandonment of Libya after the intervention contributed to the dissolution of the country, this doesn’t change the fact that there were good reasons to intervene in the first place.

Many critics of the United States’ involvement in Libya never even try to engage with Hamid’s challenge to consider what Libya would look like absent the NATO intervention. Hasan and Greenwald’s argument is comfortably simple: NATO bombed and bad things are happening. End of analysis. Greenwald even writes, “Just as there was no al-Qaeda or ISIS to attack in Iraq until the U.S. bombed its government, there was no ISIS in Libya until NATO bombed it.” Does he really think the Islamic State and other jihadists wouldn’t have exploited the civil war in Libya if NATO hadn’t been involved? If he has any reason to believe something so naive, he didn’t bother to share it. Also, the comparison with Iraq is pointless: There was no civil war in Iraq before the United States invaded in March 2003.

The assertion, without a shred of evidence, that there would be no terrorists in Libya but for the seven-month presence of NATO is echoed by Hasan in his Intercept series “Blowback.” In a February 2018 episode, he uses his preferred metaphor for post-Qaddafi Libya (a “Mad Max hellscape”) and blames NATO for, well, everything—including the presence of the Islamic State. He closes the episode like this: “As for Libya itself, today that war-torn country remains in chaos as a direct result of the NATO intervention.”

As a direct result of the NATO intervention? It’s as if Hasan thinks Qaddafi was peacefully minding his own business when NATO warplanes suddenly appeared overhead and bombed the country into the turmoil we see today.

It makes no sense to assume that “instability, anarchy, fractured militia rule, sectarian conflict, and violent extremism” could’ve been avoided if a rapidly escalating conflict between a murderous dictator and an armed insurgency had been allowed to run its course. If anything, the absence of NATO involvement could’ve extended the life of the regime, given Qaddafi the freedom to kill even more civilians (as he was planning to do in Benghazi), and prolonged the civil war. This would have led to many of the disastrous consequences Hasan and Greenwald describe, only with more civilian deaths, more vicious and entrenched sectarianism, and more opportunities for jihadists to exploit the chaos.

While we can never know what consequences were avoided by the NATO campaign, it’s certainly possible that the intervention prevented even more violence and mayhem in Libya. But there’s now a bipartisan consensus that the intervention was a mistake and a failure. During a Republican presidential debate in February 2016, Donald Trump said, “We would be so much better off if Qaddafi would be in charge right now.” A few months later, Joe Biden echoed that argument during a conversation with Charlie Rose, boasting that he had voiced his concerns in the White House about what would happen in Libya after Qaddafi fell: “Doesn’t the country disintegrate?”

Critics of the NATO campaign in Libya can’t just point to the chaos that has engulfed the country and claim vindication—they actually have to make an argument that western intervention made the situation worse. But Hasan and Greenwald refuse to do so. Instead, they simply squeeze the intervention into their pre-existing narrative about western imperialism, militarism, etc. and get back to the business of decrying the United States. While Pompeo was certainly dishonest about the United States’ record, many of his critics should drop the sanctimony and take another look at their own distorted version of history.