Kamala Harris is Dubious as Both a Feminist and Progressive

She’s approached her job like an old white man. 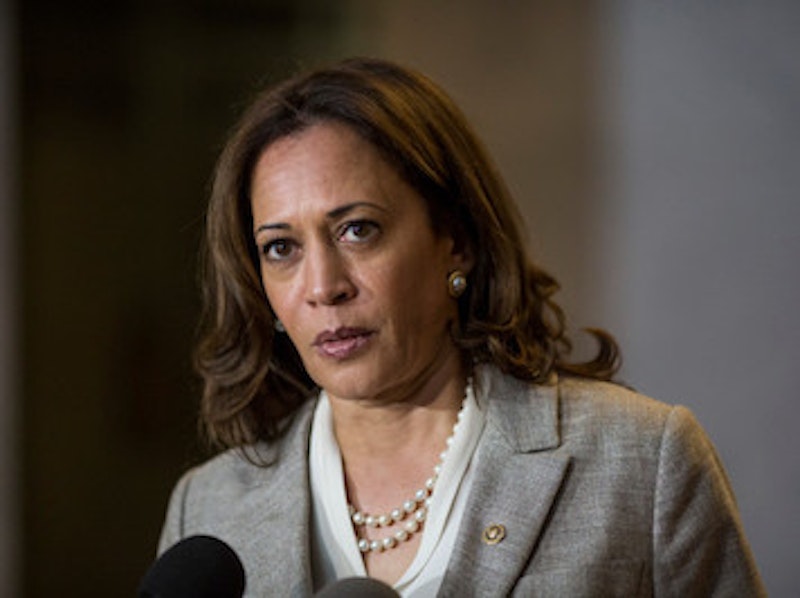 There's a clip of Kamala Harris addressing the Commonwealth Club in San Francisco when she was the DA of that city in 2010 that anyone following politics should see. She's talking about a San Franciscan who'd received her letter, as did all city residents, threatening her with prosecution if her children had more than three unexcused absences from school in a year. The woman's husband, a friend of Harris, called the DA and told her that his wife had freaked out and called the children together to tell them, “If you don't go to school Kamala's going to put you and me in jail!” “Yes we achieved the intended effect,” was Harris’ self-satisfied comment, making her sound like a third-world dictator. The glee on her face as she related this anecdote is chilling.

But Harris is having a moment now that she's announced for 2020. CNN proclaimed that it's her race now that she performed so well in that cable station’s recent Town Hall. The other day, I heard one admirer say that the California senator is “regal” and more dignified than any politician since Obama. Perhaps the regal aspect comes from Harris' mother, the renowned breast cancer scientist Gopalan Shyamala, who has described her family back in India as “Brahmins” with an impeccable bloodline.

Dignified would be welcome after our current president's oafishness. In analyzing Harris as a Democratic presidential candidate, you must first acknowledge that she has something going for her that no other candidate has: she's both black and a woman. Given the Democrats’ preoccupation with identity, this gives her a leg up on her opponents before any ideas are even discussed. If it's a tie she wins. To a certain percentage of Democrats, her ideas will matter very little. The idea of Obama 2.0 as a female is just too hard to resist.

But when you examine Harris' ideas, there are some issues, as the Commonwealth Club clip reveals. Harris' core problem is that she wants to run as a progressive candidate but she's essentially a cop after serving for so long as San Francisco DA and California's Attorney General. That's like running for office as a conservative with a background as a community organizer.

That Harris chose be a prosecutor in a nation that imprisons people wholesale casts some doubt on her liberal bonafides, no matter how quickly she scrambles to burnish them for the campaign. Harris claims she’s worked to fix a broken system from the inside, but there's plenty of evidence that her approach was business as usual. After viewing her record, civil liberties apparently isn't a major issue for this candidate. A video of Harris addressing the 2013 Chicago Ideas Week conference will raise some eyebrows. Harris mocked people who promote the idea of building more schools instead of prisons. She said, sounding like a Republican, that more schools didn't address the matter of why people need three padlocks on their front door. She spoke of swift retribution when violent crime's committed, as if those trying to reform the criminal justice system want to coddle violent offenders instead of looking into ways that the U.S. can lose its deplorable status as a mass-imprisonment state. Donald Trump, who's signed a criminal justice system reform bill, seems to have more interest in this matter than Harris does.

Arresting people, especially those in dire circumstances, to achieve public policy goals is more of an authoritarian approach than a progressive one. Truancy's a problem disproportionately affecting minority communities, students with disabilities, and foster youth. Giving them Harris' version of tough love sounds like something Trump would promote. Imagine the dystopian possibilities if the Harris prosecutorial approach caught on as a tool for social engineering.

Is it petty to talk about when Harris was 30 and was involved in a relationship with the married 60-year-old serial philanderer Willie Brown, who at the time was California Assembly Speaker? Given that Brown, a longtime slick and shady operator in California state politics, just admitted in a San Francisco Chronicle piece last Saturday that he gave two state commission jobs, amounting to an extra $100,000 in salary (he gave her a BMW too), to his young paramour, I don’t think so. With a character like Trump in office, who often resembles a mob boss, this level of corruption shouldn't be a real obstacle for Harris, but the interesting aspect of this matter is that Brown freely admitted what he did and no Democrats seem to care. Now try to imagine the reaction had this been a Republican candidate who'd boosted her career, and bank account, so brazenly. Can you hear the rabid-sounding howls from the Democrats?

Harris has come out for Medicare-for-All, but the socialist wing of the Democratic Party still doesn't trust her. Her feminist credentials are questionable as well. What kind of feminist would ever think about threatening a homeless woman with prosecution because of her child's truancy and then brag about it? We’ve already seen Harris’ “progressive tough-on-crime” act with the Clintons, and that didn't work out so well. But she's a good-looking black woman who’s smart and comfortable in front of a crowd. That alone makes her a formidable candidate.

Harris carries herself as a Brahmin, which might give her perceived gravitas. When the dust settles and opponents begin pointing fingers at her record as a public servant, however, it’ll get dicier for her. Democrats aren’t usually interested in nominating a cop for president. And if you look at her objectively, Kamala Harris has always approached her job like an old white man would.