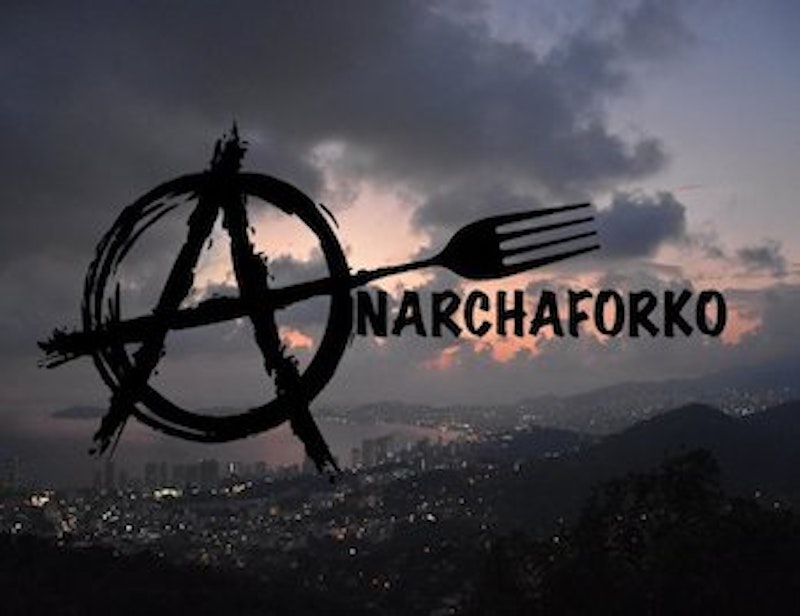 If you thought the 2017 Fyre Festival went badly, you should feel for those attending this year’s Anarchaforko festival of anarchists in Acapulco, an offshoot (touted as the original) of the annual Anarchapulco festival.

One of the Anarchaforko founders was shot dead by gunmen last week, possibly cartel hitmen who saw John Galton, as he was known, as a rival, given his interest in drugs, cryptocurrency, and commerce. His girlfriend and an associate were also bloodied but survived (after being seen spattered in blood on live Facebook feeds for several minutes, asking for help).

Unlike Anarchapulco proper, which is held at the Princess Hotel, Anarchaforko, taking place a few days later, is scheduled to be held at, yes, the Copacabana, where fittingly the lingering question this year may be “But just who shot who?” But seriously, if the question is “Who shot John Galton?” you may wonder whether anarcho-capitalists like me blame the government for this one. I hate to disappoint, so the answer is yes.

Don’t get me wrong: it sounds as though the odds of cartel gunmen being the immediate culprits are pretty high—and I don’t know if Galton was bad about paying debts, but one of his final Facebook posts was video he shot while racing through the streets to pay a last-minute bill. But if it weren’t for government’s anti-drug laws taking the drug trade out of the realm of legitimate commerce and handing it over to violent, now highly-profitable gangs who can’t settle their disputes in court—but are well-armed—shootouts of the sort that killed Galton would rarely occur.

Or if it turns out it was a mere robbery, well, there’s one more thing government cops could be preventing if they weren’t wasting half their time chasing after drugs.

Luckily, Mexican politicians are now talking about ending that country’s war against drugs, and we’d be wise to do likewise, a much cheaper solution than building a giant Wall. The fact that Wall-building has displaced any serious discussion of the drug war in some right-leaning minds is just one more reason to hate the giant Trumpian barrier. Like so many other proposed government projects, it quickly reveals many purported limited government advocates as mere fair-weather anarchists. And what kind of idiots still favor prohibition a century after the attempted and failed anti-alcohol kind anyway?

One man who I trust will never advocate prohibition and has had some firsthand experience with Latin American violence is John McAfee, the millionaire software mogul turned 2016 Libertarian Party presidential candidate who, like John Galton, probably wants to lead a (mostly) squeaky-clean life of aboveboard, legal activity but finds himself in a world shaped by insane laws. And so, at odds with taxing authorities, he is now hiding out at sea, periodically relocating the boat to escape detection even while—get this—conducting interviews about his 2020 presidential campaign. He plans to dispatch “surrogates” to the mainland wearing masks that will project moving images of his face at campaign appearances. I look forward to it.

Lately, I think America could so easily tip over into the “bandit yet popular candidate” model of governance sometimes popular from Mexico to the EU to Russia. After Trump, McAfee can’t as easily be dismissed as a mere pirate pretending to be a politician, I’d say.

Some Libertarians might be holding out hope of going with a more respectable candidate, but with former Massachusetts governor and 2016 Libertarian Party vice presidential candidate William Weld having just this week returned to the bosom of the Republican Party (perhaps planning next week to announce a primary challenge to Trump), McAfee is for the moment the obvious standard-bearer. Make it a point of pride instead of acting embarrassed about it, LP. If the Republicans can turn “outta control” into a PR plus, can Libertarians do any less? In retrospect, maybe in 2016 the LP should’ve advertised Johnson’s pot use and Weld’s drinking instead of slyly and evasively assuring the public (in a rhetorical crisscross) that Johnson doesn’t drink and Weld doesn’t use pot.

Likewise, I’m rooting for Democrat Tulsi Gabbard to ditch her stiff and commanding tone and go for more of a “wild surfing Hawaiian Hindu peacenik hot chick who travels to Syria more like a Vice correspondent than a vice president” vibe, since she’s plainly going to get buried by the Democratic (and pro-war) establishment if she tries to out-Biden Biden or out-Kamala Kamala. Gabbard has tweeted bold comments like, “As commander-in-chief, I will work to end the new cold war, nuclear arms race and slide into nuclear war. That is why the neocon/neolib warmongers will do anything to stop me.” That’s a good start, but if she hopes to be more entertaining than McAfee and Trump, she needs to get a little more crazy.

It’s the path of least resistance in American politics nowadays anyway, much as I once, a seeming lifetime ago, admired the rationalism of the 18th-century Enlightenment.

Former Starbucks CEO Howard Schultz sounds a bit more mainstream than the people named above, and if he comes to be thought of as “the normal guy in the 2020 race,” I just hope he keeps pushing the idea that the federal debt is our single biggest problem. The downside of an era of crazy politics is that large, dry problems like that one, even a problem about $23 trillion in size and growing, get ignored. Not fun enough! Not tweet-fodder! Elected or unelected, Schultz will be doing America a great service if he keeps talking about that debt and (almost Trump-like) stressing the idea that government operates that way because it’s inherently irresponsible whereas a private entity such as Starbucks could never get away with it. That was Rand Paul’s core message in 2016, if anyone remembers now.

My fear, though, is that nowadays instead of talking about the debt, we’ll just spend, say, two weeks bickering about whether Starbucks was wrong to make employees watch videos of white cops beating black perpetrators in a supposed effort to combat workplace racism. No one will learn, and everyone will be angrier at the end of those two weeks than at the beginning. Liberals will conclude Starbucks didn’t show enough footage and that the anger can only subside if the whole country has to watch. The insanity will grow. Even those islands of residual rationality, tropical anarchist conferences, will be hard-pressed to escape the fallout.