There isn’t time to get into the details and nuances of a given position. 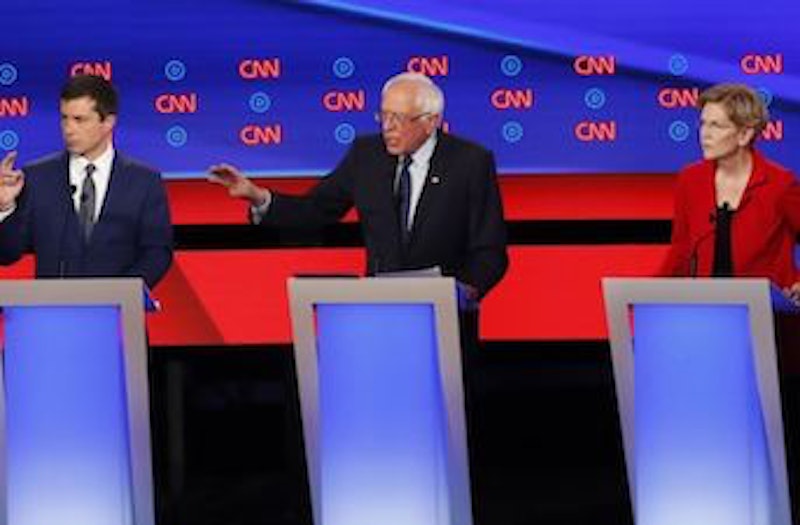 Reviews are in for the second set of Democratic primary debates, and the verdict’s clear: CNN lost. Specifically, and incredibly, newspaper pundits hold that the network lost by hosting debates that fostered conflict between the candidates. This is a peculiar, and is worth examining.

Jennifer Rubin in The Washington Post wrote that the debates didn’t “provide a forum conducive for candidates’ displays of leadership and rhetorical skills. The format creates disjointed, chaotic events and encourages the moderators to pit candidates against one another on policies they haven’t even explained, leaving many voters befuddled.”

Eugene Robinson in The New York Times said that the debates were “structured to maximize conflict and minimize clarity.” In the same paper James Poniewozik called them reality TV, “a desperate contest among a crowded field to avoid elimination.” This is evidently bad, though as Andrew Yang observed during the debate, the current President is in fact a reality TV star. Poniewozik quoted the observation, apparently without considering what it says about his thesis.

If the CNN debates were chaotic, what does anyone imagine the presidential debates will be like? Trump doesn’t survive on rationality and order; nor am I convinced that swing voters in 2016 calmly and analytically weighed the minutiae of policy outlined in that year’s debates to reach their decision. If the idea of a primary debate is to show who’s fit for a presidential campaign, chaos is what you want to see.

American presidential debates, as they’ve developed over the years, are not ideal venues for the presentation of policy. There isn’t time to get into the details and nuances of a given position, and most voters won’t be familiar with those details on more than an issue or two. Debates have therefore become about big moments, and who scored on who. This isn’t ideal, but at least gives an idea of how quickly a candidate can think on their feet and present an image of themselves.

One might think conflict is what you want to see in a debate. And coverage of the CNN debates has more or less grudgingly admitted that real differences between the candidates did emerge. Given that we’re still half a year away from the first primary, establishing in the minds of the voters rough distinctions between the people on the stage could be characterized as useful.

An election campaign is supposed to allow different visions to be put forward, from which the voters will select their favorite. Ideally there’s some conscious thought involved, but the point is the electorate hears the pitches and makes their choice. Presumably, a primary campaign will select the best candidate for the general election by testing them rhetorically, ideologically and personally. That entails conflict between the candidates, which means a primary should encourage conflict.

If it’s odd to see media coverage clucking about excessive conflict, it’s even odder when a candidate, specifically Cory Booker, says on the debate stage that “the person that's enjoying this debate most right now is Donald Trump, as we pit Democrats against each other.” Why is a participant in a debate complaining about having a debate?

Or consider candidate Steve Bullock, governor of Montana and his speech last Wednesday at the National Press Club. It was an hour-long performance insisting that he really was a progressive, not a centrist, and also that people to the left of him were putting forward policies so inherently frightening that even to debate them helped Trump. During the debate, he recalled, “I saw his reelection becoming more likely with each passing minute… We cannot defeat Donald Trump’s politics of personal destruction if we practice the politics of self-destruction. The fact is, we are well on our way to losing this election long before it ever really even has started.”

What does Bullock think is so terrifying and divisive about the ideas people to his left are putting forward? Why does it threaten the Democrats’ 2020 general election chances just to kick around some ideas in mid-2019?

Probably it doesn’t. Why the fuss over the debates, then? Politicians often have political motivations, and positioning oneself as above or outside of a debate could be a ploy to present oneself as statesmanlike. Perhaps the emerging distinction between left and centrist Democratic candidates strikes some in the party as cutting too close to whatever level of conflict there is between the left and center of the Democratic congressional caucus. They perceive left-wing ideas as inherently associated with conflict.

Most likely there’s some personal discomfort involved. If you’re used to thinking of yourself as on the left, then finding yourself suddenly at the center must be disconcerting. Easier to blame the figures now to the left of you than to recalibrate your idea of what the center is. This is aided by media figures more comfortable with parties they can describe as in some way centrist. If a new consensus is emerging in one of those parties further to the left, you’d expect a media that instinctively seeks the center of all issues to be uncomfortable with it. And thus to describe the presentation of those uncomfortable ideas as mere chaos.

When people are frightened, they may take things working as they should as a sign of impending disaster. It’s difficult today to say that anything in American politics is working as it should, but the Democratic primary has shown no sign of a systemic breakdown so far. If it’s chaotic, it’s teaching the candidates to navigate chaos. If it’s bringing out surprising ideas, that’s the point of the process. Let conflict happen. That’s what a debate is for.