American Carnage Is a Good Book About a Bloody Mess

Despite gaps, Tim Alberta’s chronicle of the GOP madness is indispensable. 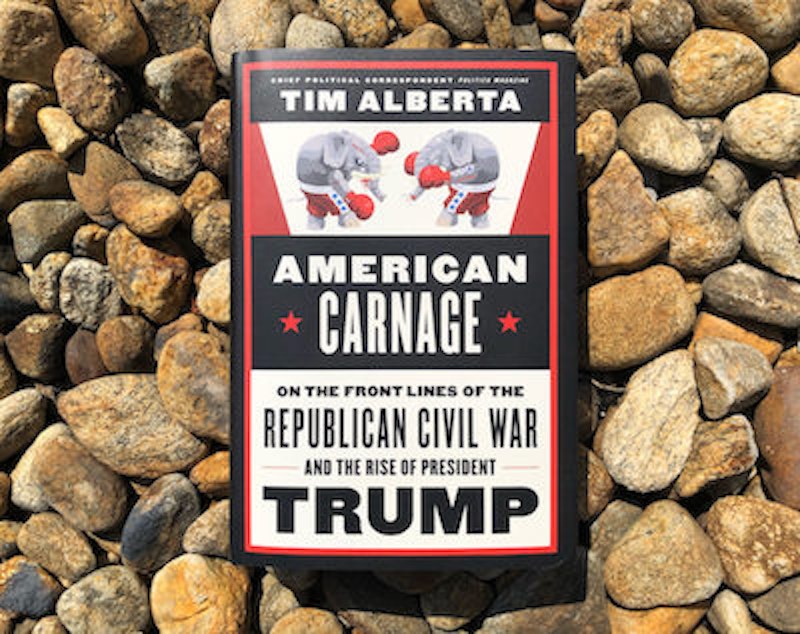 A congressman reflects on the people back home. “All this time, I thought they were voting for libertarian Republicans,” he says. “But after some soul searching, I realized when they voted for Rand and Ron and me in these primaries, they weren’t voting for libertarian ideas—they were voting for the craziest son of a bitch in the race. And Donald Trump won best in class.” The congressman is Thomas Massie, Republican of Kentucky. He’s probably best known for his attempt at driving John Boehner from the House speakership. For his part, Boehner’s best known for a fumbled Grand Bargain and then the string of assaults on his rule. Republicans swept the House in 2010 and proceeded to make like a hemorrhoid. When not afflicting Barack Obama they afflicted each other, and after six years of painful disorder there arrived Donald Trump, presidential candidate, living spirit of anarchy, and giant inflamed vessel. Now he’s king of the Republicans, and the House’s former Bravehearts make no trouble for their king. He makes the trouble and the country lives with the results.

Tim Alberta tells all about it in American Carnage: On the Front Lines of the Republican Civil War and the Rise of President Trump. Alberta has spent a long while reporting on Republican doings, first for National Journal and the National Review and now as chief political correspondent for Politico Magazine. Apparently he knows his subject well. With the time come to sum up years of work, he has assembled hundreds of thousands of pertinent facts into 612 orderly and highly readable pages. And he’s talked to the rogues’ gallery: Trump, Boehner, Paul Ryan, Karl Rove, Ted Cruz, Reince Priebus, Eric Cantor, Mike Pence, Michael Steele, Kellyanne Conway, Bob Corker, Justin Amash, Mick Mulvaney, and Mitch McConnell, among others. That’s the people on the record. Who knows what else went into the soup. At any rate, Carnage is rich in detail and captures what a roster of Republican leaders had to say as the ship went down. Anybody writing the political history of our time is going to need it.

Alberta traces what he calls the “slow-motion collapse of the GOP as a governing entity” and its replacement by the Trump Party (my name, not Alberta’s). The story begins with Sarah Palin’s nomination for vice president; it ends with a smirking Donald Trump sitting in the Oval Office and assessing his place in history. In between there’s… oh God. Somebody once said political events in Renaissance Italy were like the worst, longest, and most involved historical novel ever written. The Republican Party’s past decade could give it competition. Bubbles circle a drain, ants scatter from a foot, and Republicans frantically, repeatedly maneuver and backstab while the political order buckles. Alberta keeps better track of it all than a human should be able to do. Still, he has his limits.

First, his focus is electoral politics, not infotainment politics. That’s understandable, but the GOP has become a party where infotainers call the tune. Long before Trump made things official, his colleagues Rush, Sean, Ann, and the rest were making office holders dance by heating up constituents. Alberta captures the activity in the frying pan while skimping on the flame, not to mention the oven range. Next, he’s spoken to a lot of Republicans and not so many non-Republicans, and this can bend findings a certain way. At least that’s my guess as to why the book says so little about the GOP’s gerrymandering binge, a topic that calls out for attention if only to examine why the House suddenly had so many districts where Republican congressmen had to worry about primaries instead of general elections.

In addition, Alberta presents a rather fond account of why the House GOP snubbed Obama’s offer of cooperation back in 2009. When Republicans wanted to change around Obama’s stimulus bill, he reminded them that they were in the passenger seat and not the driver’s seat (“Elections have consequences and I won”). This dose of truth is presented as a fatal misstep. We’re also told the bill didn’t have enough infrastructure spending, which the Republicans were supposedly eager to see. Well, Republicans held the White House, House of Representatives, and Senate for 2017 and 2018. That’s 104 weeks, none of them Infrastructure Week. As to Obama’s bluntness, big boys legislate even when not being stroked. Unless they’re not so interested in legislating and more interested in acting out.

This theory as to the inner nature of today’s Republicans is supported by the behavior of GOP senators during the Obama years. Unfortunately Carnage has little to say about the Senate. Possibly Alberta didn’t cover that chamber and had no notes to draw on. Also, Mitch McConnell is still Senate majority leader. Perhaps as a result, he has less to say than the unbuttoned Boehner or the eloquent Paul Ryan, who followed Boehner into the speakership and then into political limbo. At any rate, to leave out the Senate makes for a different story. Yes, the Republicans warred with each other. But all the while they ground away at the Obama administration, most notably as the Senate slowed down or blocked everything Obama wanted to do. This wasn’t because Obama was too high-handed—appointing ambassadors and judges isn’t high-handed. No, he wasn’t a Republican and therefore had no right to govern. Hence, no judges if McConnell and his senators could help it, which to a great extent they could. When he glances at the situation, Alberta doesn’t quite get what’s going on. A “bad-faith blood feud between parties catering to pugnacious bases”? Sir, the Democrats just wanted their judges! Look for Merrick Garland in the book’s index. He isn’t there. McConnell’s Senate rewrote the Constitution, and Alberta doesn’t seem to notice.

McConnell’s lawlessness about the high court should be placed alongside the behavior of Donald Trump. Yes, the great beast looks a good deal like the marauding brats in the House. But he and the Senate leader share an attitude, one that seems fine with the great majority of Senate Republicans. It’s this: The rules don’t matter. They’re there to be wrapped about the enemy’s neck. That goes for the Constitution, which the fellows make a fuss over unless the darn thing gets in the way. When it comes to understanding the stimulus battle, this attitude seems more important than Obama’s remark about elections. In the middle of one of the country’s worst economic crises, the GOP collectively decided to play politics. Then they hijacked the Constitution. Then they made Donald Trump president. Parties that care about stable government don’t act that way. How did one of America’s two parties opt out of the two-party system? American Carnage doesn’t have that story, but it has a lot else, and whoever tackles the big job will be able to do so because of Tim Alberta’s book.