The platform allows #MassacreMoscowMitch to trend while censoring the Senator's campaign account. 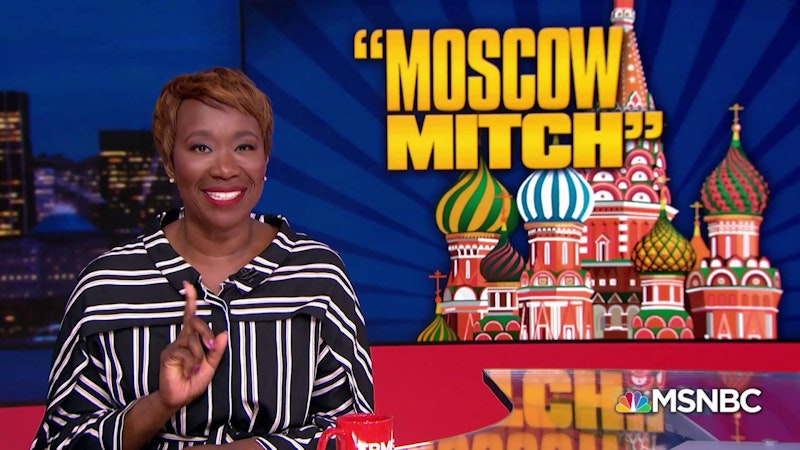 Last week, angry protesters outside of Mitch McConnell's Kentucky home issued violent threats against the Senate Majority Leader. When his campaign posted a video of the scene, Twitter locked the account and forced them to remove the video, claiming that it had violated its "violent threats policy." This came on the heels of the social media behemoth allowing the #MassacreMoscowMitch hashtag to trend after the mass shootings in El Paso and Dayton. Welcome to Jack Dorsey's Catch-22 world of absurdity.

In the Joseph Heller novel, Major Major instructs his assistant to allow prospective visitors into his office to see him only when he's not there. The assistant was naturally puzzled, just as a campaign wanting to highlight the violent nature of protests against its candidate might be when it was punished for endangering the safety of that candidate. The novel was a withering commentary, and it was funny. This situation, however, with a major social media company censoring the second most powerful GOP politician in the nation, and justifying it with the reasoning of a lunatic—or a despot—isn't amusing.

Watching that situation, and so many similar ones unfold, and still believing that Twitter's not biased against the conservative side is like believing that Blockbuster's poised for a comeback. I follow Twitter closely, but can't recall any progressives getting strong-armed in this way. The new Big Brother's headquartered in Silicon Valley and the city whose social fabric it's helped to wreck, San Francisco, and it's not partial to conservatives.

BLM activist Chanelle Helm said, in front of McConnell's residence, that somebody should stab a voodoo doll of him in the heart, but you can't inform the public about this to protect your candidate because a true believer would then want to stab McConnell himself? Journalist Ryan Saavedra said that Twitter locked his account for posting the same video, claiming it was for McConnell’s safety, meaning that calling out and calling for violence are the same thing. Major Major could appreciate that one.

It’s great for Democrats having Twitter cover their back like that, but it's not so for the other side. In February, Twitter permanently banned journalist Meghan Murphy for tweets referring to a transgender person by their biological sex and saying that “women aren’t men"—the death penalty for running afoul of the dogma police. In July, a transexual woman, Jessica Yaniv (who possesses male genitalia), disparaged the genitalia of free speech activist Lindsey Shepherd while bragging about her own imaginary vagina during a Twitter flame war. Shepherd responded in kind by calling Yaniv an “ugly fat man," for which Twitter handed her a lifetime sentence. Several weeks later, Twitter caved to international pressure and reinstated Shepherd's account. How do you go, without denying what you're charged with, from death row to free woman in a place with any reasonable sense of justice?

Twitter CEO Jack Dorsey, who's publicly admitted that he and his firm are left-leaning, wants us to believe that Twitter censors people based only on behavior, not ideology, a dubious assertion. There's an ongoing debate about whether Twitter shadow bans (the practice of covertly suppressing some of a Twitter account's tweets) conservative voices. Vice wrote that Twitter does this, and The New York Times says it doesn't. Last year, I tested the theory with someone I'd known for several years on Twitter, an anti-immigration activist (now permanently suspended) who claimed to be shadow banned. He tweeted several times and asked if I could see them on my timeline, on which they never appeared. The New York Times article that definitively denies that shadow banning's happening makes no mention of testing actual Twitter accounts in this way. My test didn't prove anything, but the Times’ didn't either.

Twitter's so liberal that its own employees “don’t feel safe to express their opinions” within the company, as Dorsey told NYU journalism professor Jay Rosen in an interview. It's not realistic to expect, in the current hyperpolarized political climate, that this ideological monolith is going to succeed at providing a neutral platform for political discourse. If bias, even if it's unintentional, seeps into the decision-making process of who gets banned, the firm's chief has stated explicitly that the very people in a position to notice it will be too fearful to point it out. There's no feedback loop in place to maintain a modicum of objectivity.

The lifetime bans that Twitter's meted out for offenses that are far from "capital crimes" is indicative of the prevailing iteration of progressivism's harsh, unforgiving nature—once you've crossed an arbitrary line, you're getting the scarlet letter and it's never coming off. Unlike Christianity's belief that all sins can be forgiven if the sinner repents, no such path to redemption's available to those incurring the wrath of modern liberalism. It's cruel and unusual punishment slyly marketed as good intentions from our self-proclaimed moral beacons.

The White House is working on an executive order to address the charges of anti-conservative bias by Twitter and other social media companies. Jack Dorsey would make a mistake to think that Trump's merely attempting to retaliate for unfounded allegations. Despite his willingness to go on shows like Joe Rogan's, where Tim Pool, a journalist and avid Twitter critic, grilled him mercilessly, Dorsey's failed to control a biased business culture that he's well aware exists. Of the 22 high-profile politically individuals who've been suspended since 2005 and who've gone on record expressing a 2016 presidential choice, 21 chose Donald Trump. That's the kind of stat that's going to bring on government regulation.