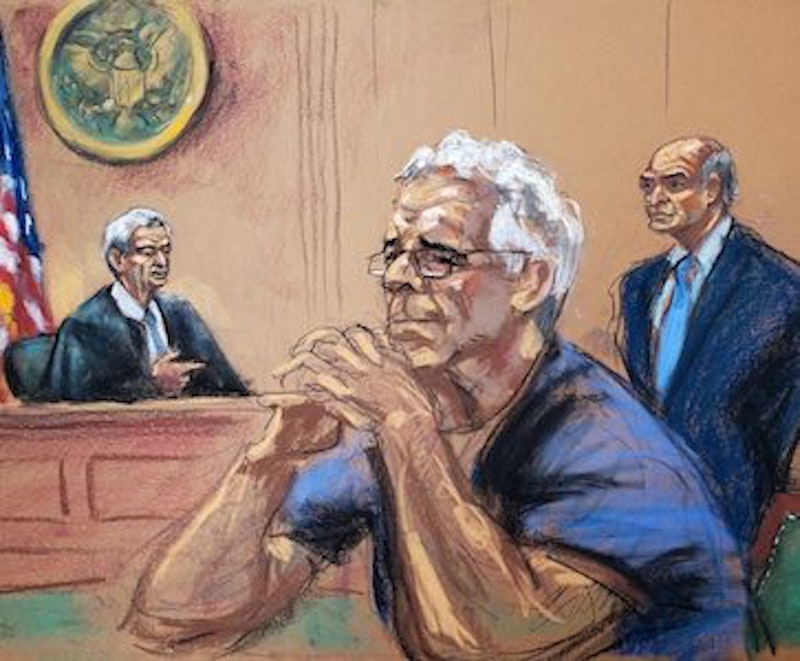 The Daily Beast hasn’t quite gotten to the bottom of Ghislaine Maxwell’s intelligence ties, Prince Andrew’s sex habits, or Bill Clinton’s flight schedule—but within hours of Jeffrey Epstein, an associate of those figures, dying in prison, the Beast had already rolled out a piece guffawing at how many conspiracy theorists were agitated by the man’s oddly-timed demise. A cynical person might conclude the Beast’s priorities include tamping down seditious speculation and keeping order.

Ditto NBC, which also found time within hours of the death to warn us conspiracy theories about Epstein are flourishing. I haven’t seen this level of coordination since, well, we were suddenly assured by every major media outlet under the sun all on the same morning that David Brock’s restaurateur ex-boyfriend wasn’t involved in child sex abuse.

Most likely, our best hope of continuing to get some new information about Epstein’s life, death, and network of powerful child-abusing associates is if some in the establishment naively think continuing to ask questions about him only hurts Trump. But, hey, if that’s what it takes to keep the pressure on, so be it. To its credit, NBC also ran a piece saying Epstein dying in custody was a shock to prison experts, who think someone dropped (or threw) the ball here.

Some at NBC sound as if they’ve already made up their minds about what happened, though: Joe Scarborough is staying on-message, not so unlike Donna Brazile after the fishy death of Seth Rich, and blaming the Russians. We may not be able to see any security camera footage revealing how Epstein really ended up hanged, but let’s all admit we do see the strings here. We see the Narrative being manipulated.

No need to ask whether, aside from Russians (who you’d think would have loved to see Epstein testify and cause chaos, wouldn’t you?), the Epstein death might benefit numerous famous Americans or people from allied countries, including the aforementioned British royal family or the former Israeli prime minister who reportedly frequented an Epstein-owned building in Manhattan filled with underage prostitutes. Nope. Russians. Always Russians.

You can see similar Narrative-manipulating strings being pulled when Twitter allows a hashtag from anti-Sen. McConnell activists to urge people to “Massacre Mitch”—but does not allow McConnell’s reelection campaign to tweet damning footage of leftists outside the man’s home calling for violence.

When the powers that be forget to maintain the Narrative, the masses they’ve by now trained so well will do the job for them. After Trump denounced white nationalism last week, The New York Times understandably ran a headline reading “Trump Urges Unity vs. Racism”—but when outraged Democrats complained that the headline made Trump sound too good and threatened to cancel their subscriptions, the Times’ subsequent edition changed it to the more disapproving “Assailing Hate, But Not Guns.”

They wouldn’t want to duck their journalistic responsibility to produce headlines that the Democrats running for the White House think help their campaigns most. And you have to congratulate the left on tactics this time: Now they’ve got Trump criticizing guns, video games, and online discourse to cover himself. At least the NRA is telling him not to go soft on gun rights (not that they’re consistent defenders of guns either, but they have their good moments).

Mere days before all of the above, the starkest evidence of the Narrative being maintained appeared to be the simultaneous lamentations about the El Paso spree shooter being ideologically Trump-like and lack of lamentations about a second spree shooter, in Dayton, being an Elizabeth Warren-supporting gun control advocate—whose ex-girlfriend from his Sinclair College social psychology class apparently talked him into a polyamorous relationship with her and her fiancé despite recognizing he was psychologically unstable. She described him as an ardent equality advocate.

And it makes perfect strategic sense for killers to like gun control, by the way. It disarms their potential victims. But virtually no one will seriously suggest we “need to talk” about Warren and other pro-regulation political figures, with their dangerous mania for control, inspiring the shooter. Maybe we should. Socialists think all other human beings are fodder for their political aspirations, after all. No wonder they turn homicidal so often. Behold the 100 million or so bodies they piled high last century. But none of that is part of the media Narrative, regardless of whether such speculations have any weight.

The idea of government being perpetually terrible at policing isn’t part of the usual Narrative either. Neither the fact that the El Paso shooter’s mom called cops to warn them about her son nor the fact the Dayton shooter was expelled from school for threatening to rape and kill classmates but then allowed back will lead anyone in the anti-gun crowd to wonder if it might be institutions other than gun ownership that need reinvention here.

I’ll say this much for the Times’ exceedingly strange David Brooks: He was at least thinking big and defying the usual Narratives on August 1 when he wrote a piece suggesting presidential candidate “Marianne Williamson Knows How to Beat Trump,” supposedly by inspiring a “decency uprising” in an unethical world. Sadly, Williamson, like any technocratic Democrat, wants more gun (and bullet) control, even if on many topics, as Jesse Walker explains, she eschews regulation in favor of metaphysical spiritual solutions in the tradition of Emerson, Christian Science, the New Age, and Trump’s own childhood pastor Norman Vincent Peale.

If only would-be moralists such as Brooks would yoke their good intentions to an anarchist rebellion against the very Narrative-maintaining, regulation-imposing establishment clique of which they’re a part, I might take them seriously as an ethical force, one capable of preventing new Epsteins arising before the old ones are quietly bumped off.