Searching for Balance in Insane Mode

There are some odd omissions in Hamish McKenzie’s recent book. 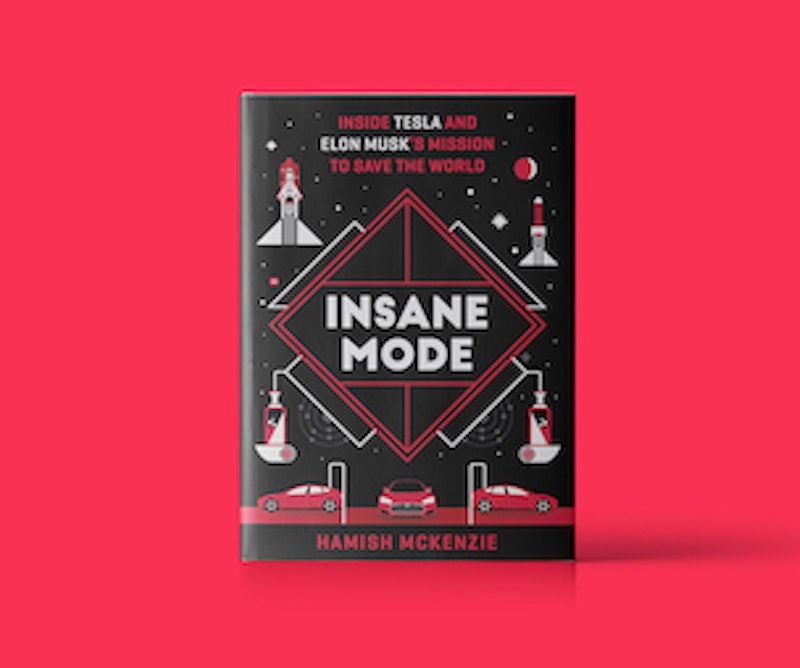 Over the last few months, General Motors confirmed it would make an electric pickup truck, Hyundai announced the all-electric version of their budget-friendly IONIQ would get larger batteries to give it a range of over 150 miles on a single charge, and Tesla updated the range of its Model S sedan to a reported 370 miles. Ford invested in a solid-state battery company and put $500 million into an electric vehicle start-up named Rivian. Jaguar’s considering making the next version of its F-Type sports car all-electric. On the other hand, Tesla saw its stock price fall nine percent after a drop in its car sales, and a few days after came the news that Tesla and Panasonic were cancelling a projected expansion of their vast Gigafactory 1. Electric vehicles may be the future, but there’s a lot of road to go before getting there.

Hamish McKenzie’s recent book Insane Mode: How Elon Musk’s Tesla Sparked an Electric Revolution to End the Age of Oil promises a map. Like its subtitle, though, the promise is a little overstated. Insane Mode has useful information, but its emphasis and arrangement is baffling.

McKenzie’s up front with his background on the subject, noting in an introduction that he worked at Tesla for a year, is a stockholder, and believes in the company’s mission. This doesn’t disqualify him from writing the book, but I wonder if his judgment was unconsciously affected. Insane Mode’s unbalanced, with too much of the story of electric cars told through a Tesla lens. Tesla’s clearly central to the modern electric vehicle, but McKenzie wants to tell a bigger story about electric cars, as a whole and in comparison to the international auto industry; unfortunately what he’s written is unduly Elon Musk–centric.

Worse, the pages about Musk are shallow. McKenzie gives us a brief biography of Musk and how he came to fund Tesla, but doesn’t discuss Musk’s odd recent moments—his Twitter comments, for example, which have led to a court case with the SEC and a libel claim from a rescue diver. McKenzie does describe the various stresses Musk’s under—not only the head of Tesla, Musk also founded and runs transportation company SpaceX, as well as working on the hyperloop train system— but there’s little interrogation of Musk’s eccentricities or what they mean.

That’s part of a more general problem with Insane Mode: the tendency to take executives and industrialists at their own self-evaluation. One chapter uncritically presents management-speak about “wartime CEOs.” There’s an unconvincing paean to the innovators of Silicon Valley. A few pages after that, Apple vice president Tony Faddell is quoted comparing cars to iPhones: “A car has batteries; it has a computer; it has a motor; and it has mechanical structure. If you look at an iPhone, it has all the same things… but the hard stuff is really on the connectivity and how cars could be self-driving.” That’s a difficult statement to take seriously.

There are also odd omissions. Few women are quoted or interviewed, and if that’s representative of the industry then it would’ve been worth examining why and whether that’s a problem. Similarly, for a book about the importance of the electric car in staving off ecological catastrophe, there are relatively few facts and figures that establish the scale of the problem.

The book’s not without strong points. McKenzie’s interviews and his recounting of personal experience are solid. He’s good at capturing second-order effects of the electric car revolution, as in his discussion of the effects of the first Gigafactory on nearby communities. And once he moves away from the story of Tesla, he gives a fascinating picture of where the industry’s going, especially when looking at the Chinese companies trying to produce new electric automotive solutions.

The book’s good at getting across the scale of the challenge faced by any new car start-up. And it has some descriptions of the resistance to change within the auto industry as it stands. The big companies are moving, but slowly. Electric cars are bought by more and more people, but still represent a fraction of new car sales. McKenzie’s bullish on the future of electric cars, and it’s hard to argue with him—but it’s also difficult to see exactly what the shape of the near future will be.

It does seem clear that, for better or worse, Elon Musk’s central to the immediate future of electric cars. And especially to the image of electric cars in North America. I wasn’t sure whether this was good or bad when I started Insane Mode, and I’m not any clearer on the question now that I’ve finished it. What I’m left with is a sense that in the long run other companies are ready to push the technology, even if Musk stumbles. The near future’s uncertain. But the long run is beyond all doubt.