Two jerks in a pissing match has larger implications. 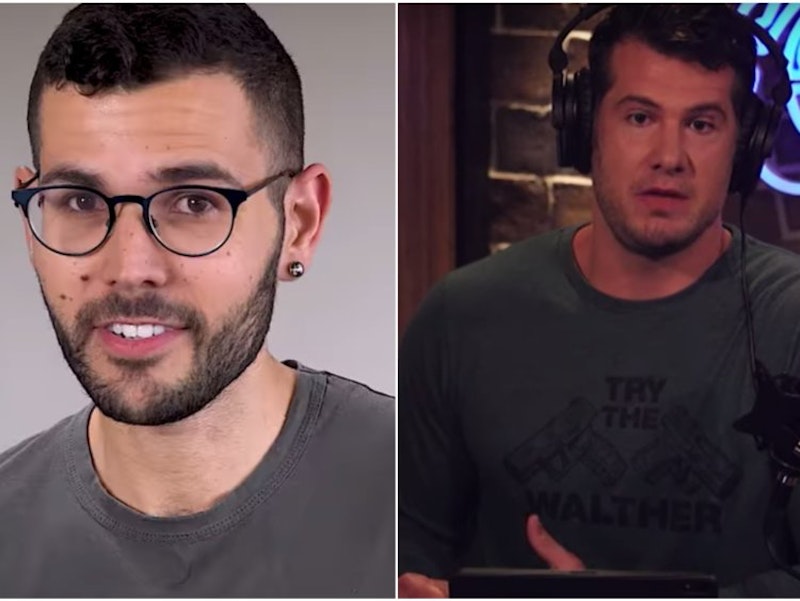 Last week, YouTube de-monetized one of its most popular personalities, Steven Crowder, host of the political comedy show, Louder With Crowder, after he'd hurt the feelings of video producer, Carlos Maza, who hosts the Vox series, Strikethrough, on the video-hosting platform. YouTube, whipped into a censorious frenzy, also went after other content creators who had no offensive content posted at all. Welcome to the #VoxAdpocalypse, a battle in which neither of the two protagonists are good guys.

Crowder's pushed the borders of propriety for a long time, but YouTube hit his wallet only after Maza, a gay Latino who claims to have “thick skin when it comes to online harassment,” waged an extended Twitter victimhood campaign. Crowder, who’s called Maza a "lispy queer," an “angry little queer,” and an “anchor baby” on his show, claims it's all in the spirit of "playful ribbing,” which isn't credible. Maza, who's of Cuban descent, even whined on Twitter that Crowder had called him a Mexican. How do you like either of these jerks?

Crowder's one of those guys—along with Sam Harris, Glenn Greenwald, Bernie Sanders, and Jordan Peterson—who command their own Praetorian Guard of male keyboard drones eager to mob anyone their thought leader disapproves of. Maza said that Crowder’s malleable disciples have regularly swarmed his Twitter account to abuse and doxx him. Crowder hasn't instructed them to behave in this manner. But Maza's no stranger to hardball. Referring to his political opponents, he recently tweeted, “Milkshake them all. Humiliate them at every turn. Make them dread public organizing.” That's targeted harassment that violates Twitter TOS, something Crowder hasn't been guilty of.

In response to Maza’s call to ban his nemesis, YouTube stated that his “hurtful” statements didn’t violate their policies. Maza continued to rant and then Vox, the Daily Beast, and Washington Post, jumped on the bandwagon.

YouTube eventually caved in a predictable and disturbing way. It submitted to the mob after “taking a harder look at harassment (i.e. taking more pressure than it could withstand in Pride Month), even after admitting that Crowder hadn’t violated their TOS. YouTube said it will henceforth take a look at the "broader context and impact" and take action if “behavior is egregious and harms “the broader community,” whatever that is. In other words, “Sorry that you took our TOS seriously as a guide to your behavior, but we make decisions on a case-by-case basis, and our written rules may not apply.”

Crowder mocks gay people in a way that's so strident and outdated that it makes you wonder if he's overcompensating. It’s conceivable that's he's a closeted homosexual, as a former writer for his show, Owen Benjamin, has implied. Benjamin said that infamous provocateur, Milo Yiannopoulis, who’s gay, has said the same thing.

Someone with more wit than Maza (@gaywonk on Twitter) would seize on this angle and turn it back on his adversary, instead of asking YouTube to do his bidding for him, thereby setting a bad precedent. Journalists aren't supposed to be in the business of silencing anyone, but Maza, who used to work for Media Matters, is a journalist in the same way that a vandal’s a redecorator.

Crowder acts thuggish and discredits himself by calling someone he dislikes a queer repeatedly. But it’s not easy to empathize with Maza. He's spent much of his career slamming political enemies and doing what he can to get them punished. Maza tweeted about his much younger sister having to see the abuse Crowder’s fanboys showered upon him of their own volition. He tweeted that Vox fans see the abuse, and it’s humiliating. Relatives seeing bad things written are the new criteria for censoring someone? If you let Crowder's drooling goons humiliate you, that's your fault. Maza actually complained that Crowder's legions were downvoting his videos, neglecting to mention that all those extra views add up to money for Vox and himself.

Another strike against Maza is he wasn't satisfied with Crowder getting de-monetized. “So the fuck what?” was his reaction on Twitter when he heard the news. Nothing short of a totalitarian ban will satisfy him. Similarly, when left-wingers identify a transgressor online, the punishment they always insist on is firing, and then there's no path to redemption.

Maza should’ve contacted Crowder privately and explained that, while he had no problem with his critiques of Strikethrough, he'd appreciate it if he'd lay off the gay schtick. He'd have been a grownup attempting to manage a situation with a childlike individual like adults do.

Instead, Maza also acted like a child and provided the blueprint for enforcing censorship on social media: Use your double minority status to cry loudly enough until you get your way. YouTube has demonstrated that the heckler's veto is the only rule that will always apply, assuming the heckler has the correct politics. No conservatives need apply.

A confused heckler got me recently after I tweeted this, facetiously: “Thinking of milkshaking a TERF.” Twitter suspended me for 12 hours (Maza received no suspension for directing people to milkshake), falsely claiming that I'd broken their rules by sharing my joking inner thoughts. The woman who reported me contacted me and made the ludicrous claim that she was a homeless mother and that I’d attacked her and others like her. In fact, I was satirizing people who milkshake others, including TERFs, but don't bother trying to tell this type what you really think—they’ve already divined what's in your head. This is the kind of person social media firms will be listening to when they decide to ban someone in the future. Ramping up to the 2020 election, we’ll see more of this.

You don't have to like Crowder or what he said about Maza to defend him. YouTube’s starting on the edges, where takedowns are easy. If it succeeds, it’ll start going after anyone whose politics are shunned by the power-hungry Silicon Valley elite with whatever trumped-up excuse they can come up with.