Panic over someone explaining why she's left Islam. 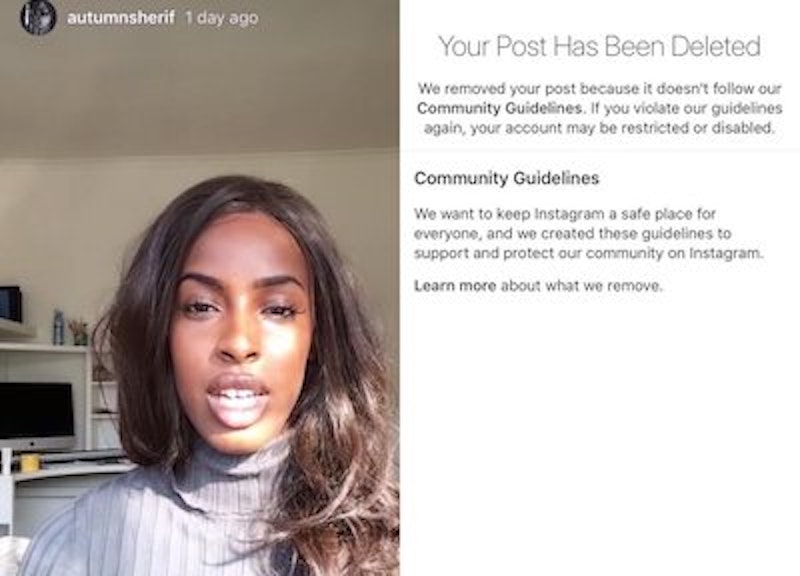 A British woman of Somali descent, who goes by the name “Autumn” on Twitter, made a video in which she respectfully explained why she'd stopped thinking of herself as a Muslim. Even though Autumn had always instinctively rejected Islam, it was in her early-20s that she spoke her mind in public.

It's painful to live pretending to believe in something, but when Autumn finally decided to post her video on social media, which made her vulnerable, Instagram rewarded her with a slap in the face by deleting it and giving her this notice: "We want to keep Instagram a safe place for everyone and we created these guidelines to support and protect our community on Instagram."

Weasel talk. Accusing someone who's addressing a difficult and emotional issue of making others feel unsafe is unconscionable. What obviously happened is that the video drew complaints from irate Muslims in the comments section and Instagram caved instantly, making up a bogus, self-serving excuse to cover itself.

I’m not the only one who's disgusted by this new definition of "safe," which is rampant on college campuses and social media platforms. It's a brazen attempt to suggest that using words can be a form of violence, which is a prelude to censoring those using incorrect words.

Who does Instagram want to fool us into believing that it's keeping safe when, in fact, it's trying to keep itself safe from any blowback it might get because of the fact that Islam's the only religion that mustn’t be criticized, even if that criticism's coming from a person who was once inside that religion involuntarily? The heckler's veto prevails once again, which is great news for whiners who want to get their way.

Imagine the hero treatment Autumn would've received had she just escaped from the clutches of Scientology, or even Christianity, and explained that on social media. This can't happen to Muslims, however, who must play the role progressives have assigned them. The only way a Muslim can be lionized is to talk about something like how proud they are to wear a hijab, which is done of their own volition, of course. The media eats that up.

Islam's one of the world's great religions, you say, while Scientology's merely a cult? Is Scientology responsible for throwing raped women into prison for fornication or for female genital mutilation (FGM)? There's nothing great about those things, or about making women into second-class citizens who men tell how to dress.

It's infuriating how the Left now defines safety as a state of serenity where nobody has to hear words that might trouble them in the slightest way. This makes me think of the drug-induced tranquility of the mental patients in One Flew Over the Cuckoo's Nest before Randle McMurphy shook them out of their stupor with his rebel act. Nurse Ratched drugged them and treated them like children, supposedly for their own benefit, but actually for hers. Instagram behaves in a similar fashion, shielding its “community" from any truths that might upset anyone of a particular religion, ostensibly for the community's own good.

Perhaps the many young people who demand their bastardized version of safety on college campuses will need to be drugged when they get out in the harsh real world and don't have pandering college administrators to protect them.

Ex-Muslims like Autumn, who desperately need allies, have a hard time finding them on the Left, which claims to side with the underdog. Progressives want nothing to do with them, or even attack them, because they're inconvenient. Embracing the apostates might rile the Muslim world, which they view as a victim class in need of their help. The Southern Poverty Law Center, which the Left speaks about in reverent terms, once characterized prominent ex-Muslim activist Ayaan Hirsi Ali, who had FGM forced on her as a child and was pressured into an early marriage, as an anti-Muslim extremist until being forced to delete the language on its website. The people slandering her with confidence from their comfortable offices had no idea what she went through in Somalia.

There's a distinct difference between Ali's attitude—Autumn's too—towards her former religion and the bigot who hates Muslims just because they're different, but this is a blind spot for the Left. Consequently, Instagram treats Autumn just like it would a redneck who's calling all Arabs ragheads. It threatened to delete her account if there was another "violation." I challenge anyone to watch that video and tell me one thing that's inappropriate about it. Instagram’s so filled with fear that it's unable to see that it's oppressing a black woman who's trying to escape oppression.