Pete Buttigieg skating on thin ice with progressives digging into his centrist past. 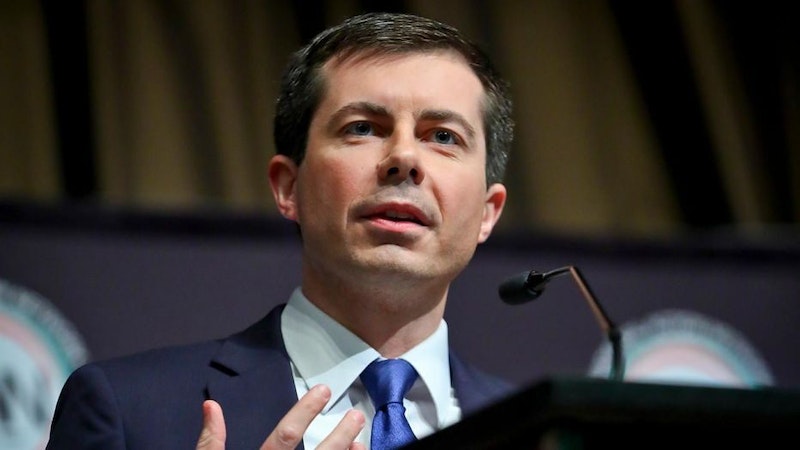 Democrats have a lot of reasons to like Pete Buttigieg. Donald Trump, as well as the two Democratic frontrunners, are twice his age. He’s a gay Christian. He’s a veteran who’d be running against a guy who always managed to stay out of uniform (in one case, thanks to bone spurs in his heels, a “temporary” and “minor” condition that “healed up”).

Unlike Joe Biden, he doesn’t have any Anita Hill hearings, weird sexual allegations, or anti-busing campaigns to answer for. Nor can he be dismissed as a quixotic radical like Bernie Sanders. His campaign has been light on policy, but remember who he’d be running against: Trump could make anyone look like a wonk.

However, in the Democratic primary, many of Buttigieg’s strengths—such a progressivism that isn’t marred by identitarianism—could turn out to be liabilities. The Bulwark’s Jonathan Last was right when he recently pointed out, “Mayor Pete’s brand is that he’s the guy who gets you to progressive policy outcomes while leaving the culture wars behind.” But will he be able to outrun the culture wars forever? This question is particularly salient at a time when the progressive wing of the Democratic Party—his wing, in other words—is increasingly captured by identity politics.

One of Buttigieg’s most pressing problems is the lack of enthusiasm for him among black voters. Recent polling from Morning Consult found that his support among African-Americans is just two percent, while Monmouth University puts him at two percent among minority groups more broadly. He’s regularly a top-three candidate among white voters, but his rank collapses among black voters. Buttigieg’s well aware of this, which is why he has been stopping by HBCUs, lunching with Al Sharpton, engaging with black lawmakers, visiting cities with large minority populations, and speaking about how his platform will help black Americans.

Although it’s possible that Buttigieg will make progress with black voters and increase his share of support by a few points, he faces a few unique obstacles—foremost among them, ironically, is the image he’s trying to craft as a unifier during a time of political and racial polarization.

In his March 2015 State of the City address, Buttigieg emphasized “racial reconciliation,” pointing out that there’s “no contradiction between respecting the risks that police officers take every day in order to protect this community, and recognizing the need to overcome the biases implicit in a justice system that treats people from different backgrounds differently.” This sounds like the bland and inoffensive rhetoric you’d expect from a responsible progressive mayor. Unfortunately for Buttigieg’s national political aspirations, he continued: “We need to take both those things seriously, for the simple and profound reason that all lives matter.”

There are good reasons to believe Buttigieg didn’t use the phrase as a derisive counterpoint to Black Lives Matter. As he later tried to explain: “That statement, which seems very anodyne and something that nobody could be against, actually wound up being used to devalue what the Black Lives Matter movement was telling us… since learning about how that phrase was being used to push back on that activism, I’ve stopped using it in that context.” Given Buttigieg’s conciliatory, consensus-seeking style of politics, which is more likely: that he was condemning Black Lives Matter with incendiary right-wing rhetoric? Or that he did, in fact, think he was making a “very anodyne” comment in pursuit of racial harmony?

While it’s possible that Buttigieg is being disingenuous when he says he “did not understand” the significance of the phrase in early 2015, recall that he used it moments after condemning the “biases implicit in a justice system that treats people from different backgrounds differently.” Earlier in the speech, he spoke candidly about the history of police brutality and discrimination against African-Americans: “There is no escaping the fact that the most grievous injustices experienced by minorities in American history were often served at the hands of police officers.” It would be difficult to argue that his 2015 speech exposed his hostility to Black Lives Matter when it explicitly acknowledged several of the movement’s core claims.

But it doesn’t matter what Buttigieg actually said or meant—the speech will follow him for the rest of the campaign. Just take a look at the headlines: “Buttigieg confronts his black voter problem,” “Pete Buttigieg Badly Needs To Diversify His Support,” “Buttigieg has 0 percent support among South Carolina black voters,” “Buttigieg Struggles to Make Inroads With Black Voters in South,” “‘He’s white, male and gay’: Buttigieg hits obstacles with black voters.”

Buttigieg’s record on race isn’t limited to an offhand comment he made during a speech in 2015—the context of that speech was the controversy surrounding his decision to fire South Bend’s first black police chief, Darryl Boykins. Buttigieg fired Boykins amid an FBI investigation of the chief for allegedly taping phone calls with several white officers. Boykins argued that the calls revealed racism among the officers and “sued the city for racial discrimination over his firing and won $50,000 in 2013,” according to The New York Times. Meanwhile, “Four white officers sued the city for invasion of privacy and defamation and won a $500,000 payout the same year.”

Buttigieg has also faced criticism for the black-white poverty gap in South Bend during his tenure, as well as his initiative to tear down 1000 homes in 1000 days to reduce blight in the city (some argue that this disproportionately harmed black citizens) and high unemployment among the city’s African-American community. When you look at this history alongside Buttigieg’s dismal performance among African-Americans, it’s clear that he does, in fact, have a serious black voter problem. And while he has been working hard to address it, he may soon be forced to confront the fact that he simply isn’t the kind of candidate who can appeal to certain identity-based constituencies in the year 2019.

In a recent speech at a Human Rights Campaign gala in Las Vegas, Buttigieg discussed “one of the buzzwords of our time: so-called identity politics… when the phrase is used, it’s usually to wave away our attention from some of the things that make our lived experiences different.” He pointed out that criticism of identity politics often comes from the right, despite the fact that “the current administration has mastered the practice of the most divisive form of such politics: peak white identity politics designed to drive apart people with common interests.”

Buttigieg continued: “It is true that each of us can see in our own identity all the reasons we’re misunderstood and say: ‘You don’t understand me because you haven’t walked in my shoes.’ Something that is true, as far as it goes. But it doesn’t get us very far. Because we could also see in our identity the beginning of a new form of American solidarity. By recognizing that the one thing we do have in common may be the challenge of belonging in a society that sees us for what makes us all different.” Yet again, in the most diplomatic and inoffensive way possible, Buttigieg is telling us that all lives matter.

Al Sharpton, who Buttigieg met with as part of his effort to reach out to black America, was indignant: “Yes, we all need to come together and the only way you can come together is… recognizing that I have to come from a further back distance that I didn’t cause… I’m still economically unequal and to tell me to forget about that is insulting.” Former NAACP president William Brooks gave Buttigieg credit for his comments about white identity politics, but asked: “Why is he elevating identity politics as the moral emergency, as if that’s the threat, rather than the hate we’re seeing percolate on the other side?”

Buttigieg took every precaution to avoid having another “all lives matter” moment in Las Vegas. He explained that he’s not “pretending that there are equivalencies between the different patterns of exclusion in this country.” He acknowledged racial disparities, from discriminatory housing policies to health care: “When black women are dying from maternal complications at triple the rate of white women, it means for the purposes of public health, they are living in a different country.” And he specifically appealed to the “voter of color who is getting tired of politicians, Republican and Democratic, making promises they can’t keep to their community.”

But none of this mattered—his speech was still treated as an “insulting” dismissal of the concerns of black Americans because he argued that a civil society has to be built around universal values and national solidarity. Of course Sharpton doesn’t speak for the entire African-American community, but his comment reflects an entrenched attitude on the progressive left—an attitude that privileges identity-based grievances over the shared experiences and interests of all American citizens.

Buttigieg isn’t the only candidate who has struggled to reconcile his anti-identitarianism with this view. During Sanders’s announcement interview on Vermont Public Radio, he said, “We have got to look at candidates, you know, not by the color of their skin, not by their sexual orientation or their gender and not by their age. I mean, I think we have got to try to move us toward a nondiscriminatory society, which looks at people based on their abilities, based on what they stand for.” That’s a sentiment the Buttigieg of 2015—who earnestly thought the words “all lives matter” would remind the people of South Bend, black and white, of their shared citizenship and bind them closer together—would’ve applauded.

But Sanders was relentlessly attacked by progressives who accused him of downplaying the all-encompassing importance of identity. The CEO of the Center for American Progress, Neera Tanden, captured the essence of the argument: “At a time where folks feel under attack because of who they are, saying race or gender or sexual orientation or identity doesn’t matter is not off, it’s simply wrong.” Reread the comment that prompted this outburst—note how progressive and uncontroversial it would’ve been even a couple of decades ago. It’s clear that efforts to build solidarity that transcends the narrow confines of identity aren’t welcome by many on the progressive left today.

And that’s what Buttigieg is trying to do. He’s worried about the “very real walls being put up between us as we get divided and carved up.” He wants to build a “new form of solidarity” around our common citizenship instead of our competing identities: “The more you know about exclusion,” he said in Las Vegas, “the more you think about belonging. And we have a crisis of belonging in this country.”

The problem is, many Americans have a much narrower definition of belonging than Pete Buttigieg—national solidarity is all well and good, but to them, group solidarity comes first. Even when he makes the right noises about intersectionality, historic injustices, etc., this fundamental difference will continue to put up a very real wall between his campaign and many of the voters he desperately needs to reach.