President-Elect’s supporters have been sucker-punched. 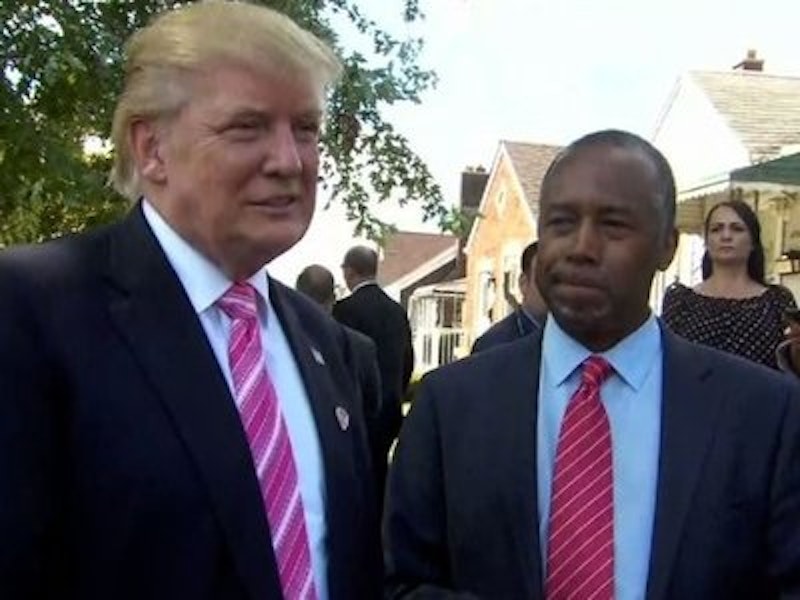 Dr. Ben Carson, renowned Johns Hopkins neurosurgeon, declined an offer to head the Department of Health and Human services for which he might arguably be qualified, only later to accept appointment as secretary of Housing and Urban Development for which he unquestionably is not. Next came Scott Pruitt, Oklahoma attorney general, climate change skeptic and fossil fuel ally, who was named head of the Environmental Protection Agency, custodian of our land, air and water, which Scott is suing over enforcement policies he dislikes. Donald Trump’s eventual choice for HHS secretary, Rep. Tom Price (R-GA), is an all-out critic of the Affordable Care Act, which he vows to dismantle and leave 20 million without health insurance.

And how about Andy Puzder, the fast food executive and harsh critic of minimum wage and overtime pay rules, who’s going to be secretary of labor, a slot usually reserved for advocates of labor positions. Puzder has also criticized Obamacare as taking money out of people’s pockets so they can’t patronize his burger joints. Add to the carnival of characters a professional wrestling doyenne and three retired generals who, perhaps, reflect President-elect Trump’s military-school upbringing as well as his authoritarian streak, and what America’s facing is not a cabinet or a team of rivals, but a wrecking-crew.

And this is just a sampling of the 4000 jobs that Trump will fill that are intended to give the administration the appearance of conservative orthodoxy while at the same time he’s jawboning business, the opposite of Republican free market beliefs. And by the way, Trump’s also appointed three Goldman Sachs officials, a firm he sharply criticized during the campaign as being in the pocket of Hillary Clinton.

So, it’s fair to ask, just what the hell is Trump thinking? The overly simple answer is probably that he isn’t. Trump, simply put, is, in some cases, rewarding loyalty (Sen. Jeff Sessions as attorney general) and in others, to put it politely, going with his gut on first impressions (Gen. James Mad Dog Mattis.) Or is he playing a cynical game of deception and deflection, the daily dribble of tweets and announcements to move our attention away from him and his inadequacies while his surrogates dismantle the government as we know it.

And in that time-honored game of winking connivance, those appointees that require a Senate once-over will probably win approval on the unwritten courtesy that a president is entitled to the cabinet and staff of his choice, and the voters have final approval in the next election, four years away, by voting up or down on the president who made the choices. (Remember, too, that Republicans are the majority and unlikely to deny their president his personnel picks.)

Justice Louis Brandeis observed, “The most important office in America is citizen.” No longer. This is not a good time to be down-and-out in America. For the round table of billionaires that Trump’s assembling has the potential to undermine an established way of life since Franklin Delano Roosevelt’s New Deal. And the last people to recognize that are the very ones who benefit from those programs, the once-upon-a-time Democrats who supported Trump and are now called uneducated, working-class white males. They’ve been sucker-punched.

Consider Carson, a familiar presence in Baltimore. Give him credit for rising from a shiftless childhood of poverty to the eminent Baltimore physician that he became. There the story begins and ends. Carson, though a brief presidential candidate, has no knowledge of government, is not conversant in housing policy, is unfamiliar with the many ways that HUD helps people and has probably long forgotten the terrors of the Detroit ghetto that bedeviled him as a hot-tempered kid. Earlier, he had rejected the HHS offer because he had no government experience. Why Trump chose him for HUD is anybody’s guess.

Why Carson accepted is an even greater mystery. Here’s the official explanation: “Ben Carson has a brilliant mind and is passionate about strengthening communities and families within those communities,” Trump said in a statement announcing Carson’s appointment. “We have talked at length about my urban renewal agenda and our message of economic revival, very much including our inner cities. Ben shares my optimism about the future of our country and is part of ensuring that this is a Presidency representing all Americans.”

During the campaign, Trump characterized inner cities as violent wastelands that are unfit to inhabit. “You have so many things, so many problems, so many horrible, horrible problems.” Trump said during the campaign. “The violence. The death. The lack of education. No jobs. We’re going to work with the African American community, and we’re going to solve the problem of the inner city.” And Carson, for his part, denounced government social safety-net programs as “creating a cycle of dependency” that destroy initiative and the will to work. Carson was not as forceful as Trump in his depictions of urban America. “We have much work to do in strengthening every aspect of our nation and ensuring that both our physical infrastructure and our spiritual infrastructure is solid,” Carson has said. So much for the passion Carson brings to the HUD assignment.

Carson could begin with a walking-tour of his adopted city of Baltimore, especially the neighborhoods surrounding the meandering Johns Hopkins Hospital campus on the east side of town. Hopkins is squat in the middle of blight. But the mighty institution realized that it’s impossible to move a hospital to a better neighborhood, so it decided to undertake a vast improvement of the neighborhood around it. Hopkins is rebuilding the entire area around the institution. It’s private enterprise, true, but the visual impact could be a learning experience for Carson on what HUD can do with its $49 billion budget. Or, Carson would wander around North Ave. and watch the bulldozers take down whole crime-infested blocks that will be replaced with new affordable housing and public space.

But Carson has a hostile attitude toward government, government programs and the people who depend on them. He sounds as if he believes that people are poor because they choose to be, and if that is the case, government should not be in the business of trying to eradicate poverty. In addition to HUD’s obvious roles in housing and poverty, the agency enforces anti-discrimination laws, assists low-income applicants in obtaining home mortgages and operates more than 3000 local housing authorities. Critics of Carson’s appointment fear that he might use the department’s rule-making powers to change the character and the role of HUD.

Baltimore has an over-abundance of the state’s poor, who are overwhelmingly black and who are locked out of decent, affordable housing for a variety of reasons, past and present. A number of years ago, when Daniel Henson headed Baltimore’s housing agency, an effort was made to disperse part of Baltimore’s poor population to better housing in Baltimore County. The program was called “Move to Opportunity.” There was the usual uproar about exporting Baltimore’s problems to the suburbs, back then called “urbanization” of the counties.

When federal and county government efforts crumbled under public pressure, Henson assumed personal control over the program to relocate people to a better way of life. He substituted dynamite for paperwork. Henson blew up the high-rise hell-holes on the east side of Baltimore, leaving county governments no choice but to absorb some of the city’s displaced poor into Section 8 housing. That may be a dramatic example, but it illustrates the kind of imagination Carson could bring to HUD if he’d put aside his preconceived notions about people and their will to want to get ahead.