Nancy Pelosi and Keith Ellison are not the answer. 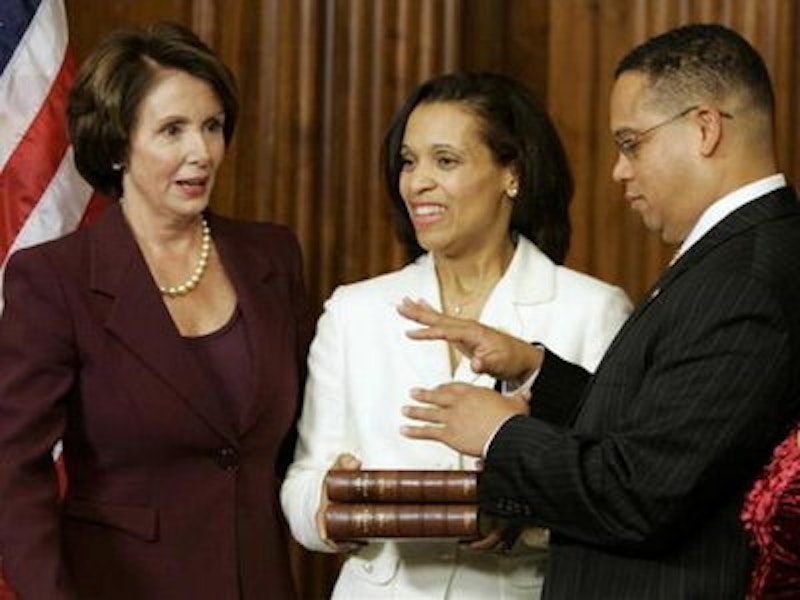 In the recent dust-up at the Harvard Kennedy School, a lot’s been said about Hillary Clinton campaign communications director Jennifer Palmieri calling out Donald Trump campaign manager Kellyanne Conway for making his campaign hospitable to the white power crowd. Overlooked was the nature of Conway’s response, “And we did it by looking at the schedule, and looking at, yes, the electoral map of 270 because that’s how you win the presidency.”

In that response, every lingering question I’d had about how Trump won the presidency was answered. By focusing on electoral numbers with such precision, it became easy for the Trump campaign to court less than desirable support. A vote is a vote, and in the end, it’s all about the numbers.

Since 2010, it’s clear this is something Republicans understand better than Democrats. In fact, since the Reagan era, Republicans have just been better at long-term strategizing. They look as every loss as a catastrophe in need of a fix. As annoying as it is, they maintain such a strong underdog mindset that they’re not complacent in victory.

In 2006, conservative pundit Hugh Hewitt released a book called Painting the Map Red: The Fight to Create a Permanent Republican Majority. While Hewitt’s initial focus was for Republicans to maintain control of Congress in that year’s midterm election, he was thinking long-term, especially about how Republicans can take control of the political narrative. The overall theme is casting the left as a villain that’s indifferent to the military and veterans, disrespectful of religion, adept at appointing activist judges, anti-family, and just flat out mean-spirited. The Republicans ended up losing control of Congress that year, followed by the White House in 2008. But Republicans came back in 2010, taking control of Congress and most state governments, and the Democrats still don’t know what hit them.

This was especially evident in the recent reelection of Nancy Pelosi as House Minority Leader. Facing a challenge from Ohio Rep. Tim Ryan, his comparative youth, blue-collar background, and home base in the Great Lakes region Hilary Clinton just lost should’ve made him a shoo-in for the job. Granted, Ryan’s Congressional record is that of a dull bureaucrat just plodding along, but outside a very narrow group of voters and party elites, Pelosi is regarded with almost universal contempt. A recent appearance on CBS, where she said, “I don’t think people want a new direction,” should make everyone who voted for her this year despondent. Pelosi is so despised, that House Majority Leader Kevin McCarthy said that just dropping her name at Republican fundraisers makes people open their wallets.

Enabling Pelosi’s unyielding daffiness is nothing compared the Democratic Party trying to put itself back together. After party chairwoman Debbie Wasserman-Schultz resigned in disgrace in July, her temporary replacement, Donna Brazile has also proven less than honorable. Most of the names floated aren’t people that I see having the crossover appeal necessary to woo voters. I also think it’s necessary to have a party chair who’ll make it their full-time job. As Republican chair since 2011, Reince Priebus had just that one job, and his party won most elections. Wasserman-Schultz was a sitting Congresswoman during that same time, and appeared to treat her role as DNC chair as a vanity project to pad out her resume. This probably explains why Republicans have excelled at mid-term elections.

The names mentioned for the job don’t look promising. Minnesota Rep. Keith Ellison’s history with Louis Farrakhan is making the Anti-Defamation League nervous, and pro-Israel Republicans are eager to pounce. Media Matters founder David Brock is the sort of Clinton insider the party should purge. Planned Parenthood president Cecile Richards is an easy target for anti-abortion-obsessed Republicans. I think Democrats should look at what worked for Republicans; another lesson from Priebus’ success is that he was Wisconsin state chair prior to heading the national party. Promoting a workhorse, with no baggage, from within might be more effective. Virginia is the only swing state that Clinton won, so state party chairwoman Susan Swecker should be seriously considered.

To go back to Hewitt’s strategies, he talks about purging centrists, singling out then-Rhode Island Senator Lincoln Chafee for not being conservative enough. Since Chafee lost his 2006 reelection bid, he became an Independent, was elected governor of Rhode Island, and then became a Democrat. While I can see how this worked to build party unity, I think this sort of “purity testing” is what put us on the path to hyper-polarity. Our governments need more diversity of thought, not less. People like Michael Moore argue that this is the path we need to take, but I’m not sold.

In reading Hewitt’s section on regional strategies and shifting demographics, I was struck by his assessment that Florida is the only swing state in the South. It’s not that he’s wrong, but it got me thinking that in the long term there are two states the Democrats might be able to swing: Georgia and Tennessee. Illinois is really a purple state; the tri-county area of Chicago and its surrounding suburbs are blue, while the rest of the state is red. By using Illinois as a prototype, Democrats could put their urban sensibility to broader use. By investing their time and energy in Atlanta, Athens, Savannah, Nashville, Memphis, and Chattanooga, they could start by flipping some Congressional seats and work their way up.

The one strategy that Democrats need to drop is the wishful thinking that demographics will deliver voters. The elderly voters who came to the party through the New Deal or the Great Society are dying off. Women voters, particularly white women, are not a reliable monolith. People of color resent their votes being taken for granted. The biggest downside to our two-party system is that the party in power is usually the party we hate least. Democrats need to remember that trust is earned, and they need to work overtime to win it back.