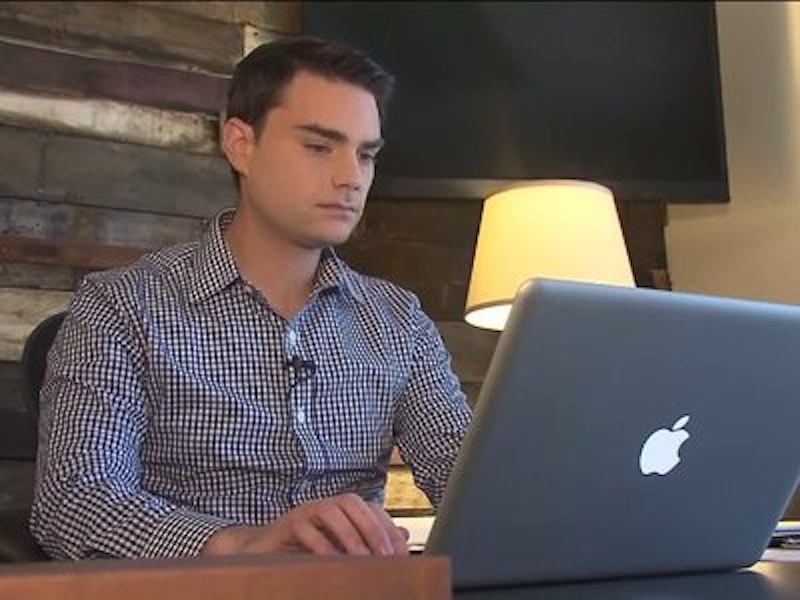 While it's taken some longer than others, nearly all of the notables associated with the Republican Party have fallen in line behind Donald Trump. Marco Rubio once said Trump shouldn't have access to the nuclear codes, but ended up endorsing him anyway. Trump trashed Ted Cruz’s wife Heidi and linked his father with JFK's killer, and he caved too.

The anti-Trump pundits held out longer, sure that he’d lose. Conservative stalwarts Weekly Standard, National Review, and Commentary all offered dire pre-election assessments of a Trump presidency, but after November 8 they eased up on him, fixating more on the street protests. Those like CNN’s Kayleigh McEnany—who once said Trump's remarks about rapist hordes invading from the south was “something very unartful, very inappropriate”—who morphed into Trump cheerleaders, are finding their stars rising now that the media needs conservative voices to interpret the upcoming presidency.

Ben Shapiro, radio host and Daily Wire editor-in-chief, is one of the few conservatives who opposed Trump from the outset and are still willing to offer pointed criticism. Shapiro was previously editor-at-large at Breitbart, but quit after feeling that then-Breitbart head honcho Steve Bannon had turned the conservative website into Trump's “personal Pravda.” The conservative flamethrower isn't the type to run with the pack for expediency’s sake. Taking a purist position now seems almost quaint amidst all the GOP opportunism, but L.A.-based Shapiro reserves his loyalty for his strict conservative principles.

Trump’s now running roughshod over the cornerstones of traditional conservatism with the complicity of the very Republicans who’ve long claimed to be wedded to them. It’s not that Shapiro dislikes everything Trump’s done post-election, or that he wants him to fail, but he doesn't believe in the “honeymoon” period that many Republicans appear to be willing to grant him.

Free markets are at the core conservative, yet Trump has no ideological attachment to them. If they suit him, especially when profits are to be gained, he loves them. When they present an obstacle, he's fine with jettisoning them. It's the very same loose relationship he has with any and all principles, including honesty. Take the issue of free trade. Trump talks of imposing tariffs on imports and restrictions on American firms sending jobs abroad. Shapiro understands the widely-accepted economic theory of comparative advantage, and knows protectionism isn't the road to national wealth.

Much of the GOP rank and file is celebrating the jobs that Trump saved at Carrier. Even the conservative leadership has endorsed the action. House Freedom Caucus Chairman Jim Jordan (R-OH), called the deal “great.” Shapiro calls it “crony capitalism,” which Republicans have been railing against for years. He realizes that the costs associated with such a deal must be weighed against the benefits in order to accurately appraise its value, something that never happened on the GOP side. Shapiro takes the hard-line free laissez-faire capitalism stance that jobs are a byproduct, rather than the goal of an economy, but he sees the GOP now drifting towards the socialist ideal of full employment.

If Trump’s policies plunge the country into a deep recession, he’ll be fine, personally. It would present him with an opportunity to purchase assets cheaply, in fact. The rest of the nation doesn't have his safety net. It needs protection from Trump’s recklessness. Much of the Republican leadership is now talking about how “popular” his recent actions are, rather than how “appropriate,” and that's an ominous sign that they're writing him a blank check.