Trump, Tropes, and the Jews

If someone quibbles, you just say it again, louder. 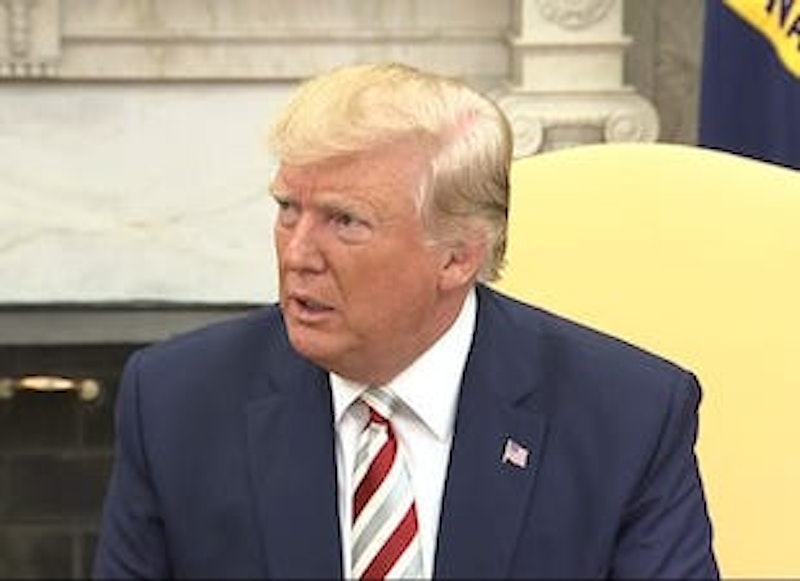 Donald Trump, depending on the day and the commentator, is both an anti- and a philo-Semite. Or perhaps he's neither, really, but we're not going to be able to assess that from what people say. If you like Trump, whether you're Jewish or not, you'll no doubt find his foursquare defense of Israel, as well as his attempt to ban criticism of Israel on American college campuses, admirable. That's what I mean by his philo-Semitism. And if you’re opposed to Trump, you figure that this dangerous man has every vicious prejudice the human mind can conceive. You’ll find "anti-Semitic tropes" in every other sentence. People are identifying anti-Semitic tropes everywhere these days. For example, if you’re a leftist and have misgivings about “globalization” or “global capitalism,” you’re trafficking in anti-Semitic tropes of stateless Jews conspiring to control the world economy.

The “anti-Semitic trope” trope is a way to pull off an attack without actually having to specify anything that’s gone wrong: you just vaguely assert of various phrases that they constitute the wrong sort of image or connect to the wrong sort of history (most every phrase connects you to most of history, however). This is typical of today's form of political consciousness. It starts with the non-insight that words have tremendous power, a magic power, really, to alter reality, and then condemns people for using the wrong words, portraying that as the essence of substantive evil. And then it starts to bleed or generalize, until the bad tropes encompass a third of the dictionary and everyone is, it turns out, speaking anti-Semitically all the time.

I urge we all swear off the word “trope,” but I’ll start after this column. After a recent Trump speech at the Israeli American Council, Dean Obeidallah, described as a "former attorney," wrote up a pretty typical treatment for CNN:

On Saturday night, President Donald Trump served up a buffet of anti-Semitic tropes during his speech before the Israeli American Council advocacy group in Florida. He played on the dangerous anti-Semitic theme of Jews having dual loyalty to the United States and another country, when he said, "They don't love Israel enough."

Obeidallah thinks he doesn't have to say anything more; it’s just supposed to be obvious to all decent people that that's an anti-Semitic statement. Oddly, though, Trump was not chiding American Jews for being insufficiently loyal to the United States, but for being insufficiently loyal to Israel. That is, he was attacking (some) American Jews for not having dual loyalties after all. But in the world of tropes, what it means or why someone's saying it or the context in which he's saying it (to a Jewish audience, in this case) is irrelevant. You isolate the figure of speech from its meaning on a specific occasion and jam it into your mechanical structure of condemnation. If someone quibbles, you just say it again, louder. If they keep quibbling, you accuse them of anti-Semitism too.

Obeidallah continues with this:

[Trump] then invoked the slur that Jews are hyper-focused on money, telling the crowd that to protect their money they will vote for him—falsely claiming that 2020 Democratic Presidential candidate Elizabeth Warren's proposed "wealth tax" will take "100% of your wealth away." He added, "You're not going to vote for the wealth tax... you're going to be my biggest supporters because you'll be out of business in about 15 minutes." And he went one step further, saying that Jewish people in the real estate business he knows "very well, you're brutal killers. You're not nice people at all, but you have to vote for me."

Leaving aside Obeidallah's grammatical glitches, this does assume Trump was talking to business people, but perhaps by and large he actually was. Also, Trump pitches everyone with the claim that he's good for their bottom line. So does Elizabeth Warren, for example; she tells them their healthcare costs will go down on her watch. She must think that we're hyper-focused on money. And indeed, we are.

Also, Trump is a New York real estate developer and, one suspects, met most of the Jews he knows, including his daughter's father-in-law (or, looking at it another way, his son-in-law's father), in that line of work. Well, that's not much of a defense, I suppose, but one thing's obvious: he meant "brutal killers" and "not very nice people" as terms of praise. That's just the way he'd describe a season winner on The Apprentice, for example.

It's also the way he describes the world leaders he most admires, such as Erdogan, Putin, and Netanyahu. It's probably also how he’d like himself to be regarded, in the real estate business or in world affairs. If you're a stone killer in business, you have Trump's respect, and maybe his daughter too. Also, he was rather daring and funny, saying this to that audience, though that makes no difference according to the trope theory of reality, which makes no distinction, for example, between sarcasm and seriousness. On the other hand, once you get rid of all context or intention, Dean Obeidallah is himself trafficking anti-Semitic tropes.

Trump has easily been the American president who’s most supportive of Israel, in the sense of nodding along with Netanyahu whenever the latter speaks, and sending aid of all kinds. Now it's true that "the state of Israel" is not the same thing as "world Jewry," but still I think it’d be surprising for an obvious anti-Semite to consistently support Israel throughout a presidential term; Trump seems to have dual loyalties. That support is substantive, in contrast to a trope, which is a little chunk of yip-yap. And it would, overall, be surprising, willfully self-destructive, for any candidate to give an anti-Semitic speech to a Jewish audience. I'm going to suspect, however, that members of that audience are contributing to his campaign, in part because of his extremely strong support for Israel, which was actually the theme of his speech.

Virtually simultaneously with the speech, Trump launched an executive order intended to prohibit anti-Semitic speech on campus, which would again be odd coming from a president who's supposed to be an obvious anti-Semite. In a New York Times op-ed, Jared Kushner (or his staff, maybe), wrote, "This new order adopts as its definition of anti-Semitism the language put forth in 2016 by the International Holocaust Remembrance Alliance. For example, the alliance defines 'the targeting of the state of Israel, conceived as a Jewish collectivity,' and those who deny 'the Jewish people their right to self-determination, e.g., by claiming that the existence of a state of Israel is a racist endeavor' or those who compare 'contemporary Israeli policy to that of the Nazis' as examples of anti-Semitism."

It’s surprising, as well, for an anti-Semite to adopt the extremely broad definition of anti-Semitism provided by the Holocaust Remembrance Alliance. And this executive order directly contradicts his previous order on campus free speech. The intention is to effectively ban criticism of Israel, and I hope this sort of anti-anti-Semitism order is quickly tested in the courts, for it’s flatly incompatible with the First Amendment.

It's pretty plain that Trump has no particular commitment to free speech, for example, but only to his own reelection, which he hopes to achieve by relentlessly grinding the partisan axe. Defending free speech on campus at this point basically means defending non-leftist speech, because that’s been the speech that's endangered. But banning criticism of Israel—for example on the grounds that Israel treats Palestinians as second-class or non-citizens and brutalizes them—is banning a certain sort of left-wing speech. Trump’s fine with that, because he doesn't actually have any commitment to human freedom for Americans or anyone else.

But he's not an anti-Semite. You're going to have to rest content for condemning him for anti-Latinx or anti-Muslim bigotry, charges which can be sustained by something other than this half-baked, tendentious trope nonsense.