The Black Community Has an Anti-Semitism Problem

Jersey City massacre of Jews shines a harsh light on the media as well. 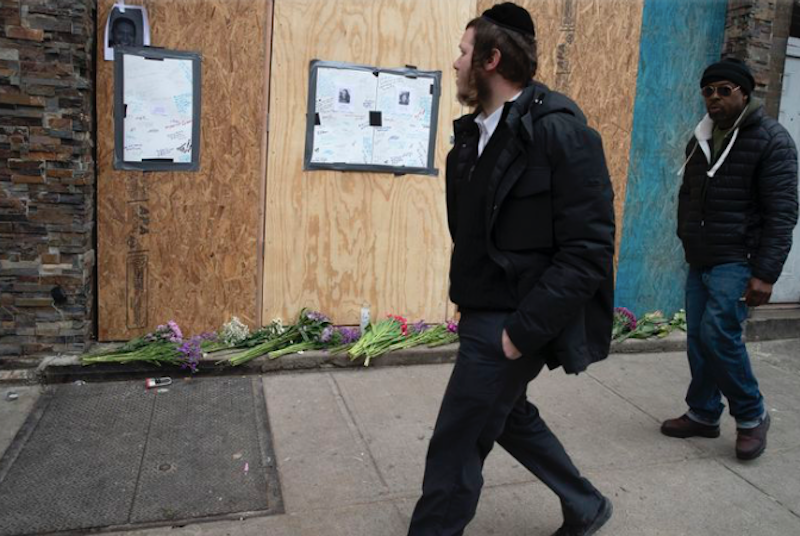 Two rifle-welding shooters targeting Jews on Wednesday in Jersey City was the nation's worst instance of anti-Semitic violence since last year's Tree of Life synagogue massacre in Pittsburgh. This one, however, doesn't fit the media's preferred narrative in that it didn't involve white supremacy. Both of the assailants in the kosher supermarket attack that left three Jews and a police officer dead, were black, and one of them has been linked to the Black Hebrew Israelite movement, a group you may regularly see spewing hate if you live in a major city. They have sound systems that can carry a couple of blocks, scream about white people being the physical representation of the devil, and spread anti-Semitic stereotypes. Recall this hate group's role in the Covington Catholic High School incident in Washington D.C. in January, when the media gave them a pass.

The Pittsburgh massacre gave the media an opportunity to bolster the case that white supremacists, rather than jihadists, are our main terrorist threat now. While the Jersey City attack presents an opportunity to start a discussion about anti-Semitism in the black community, it won't happen because that topic's taboo. As for anti-Semitism in general, the Left and the media have only a tepid interest in it unless it's coming from the Right.

New York City Mayor Bill de Blasio responded to the tragedy by tweeting about the need to stop anti-Semitism, but anti-Semitic attacks have spiked since he's been in office (especially in Crown Heights) without him showing much concern until now. The same goes for The New York Times, which gives little coverage to anti-Semitic violence in the city. You have to go to the New York Post for that, or a handful of Jewish publications. A high school kid who looked like he was smirking at a Native American (the Covington affair) received national condemnation in the media, while actual physical attacks on Jews in Brooklyn are of little interest.

Anti-Semitic hate crimes in New York City are up 63 percent over 2018, per NYPD statistics. Swastikas are scrawled on synagogues, and Orthodox Jews are particularly targeted, perhaps because of their recognizability. Judging by the videos I've seen, the perpetrators are often young black males, which means we're in delicate territory. It's no surprise that the issue of anti-Semitism among black people is swept under the rug—it's too hot to handle. Progressives and the media prefer to fret over Islamophobia, even though Jews have been the victims of more religiously motivated hate crimes than any other group since 1995 in the U.S. There's a reason so few people are aware of this situation.

The uneasy relationship between blacks and Jews dates back to the Great Migration when, for economic reasons, more than six million African-Americans moved from the rural South to cities in the North, Midwest and West from about 1916 to 1970. While the Irish dominated police departments and the Italians were heavily involved in labor unions, the people that blacks came into contact with in schools, shops, and as landlords were often Jews. And just as when any two ethnic groups find themselves living together in close quarters, conflicts broke out. Whereas neo-Nazis, motivated by white supremacy, view Jews as outsiders, or counterfeit whites, anti-Semitic blacks came to see them as the embodiment of white oppression, usually based on the familiar tropes involving money, power, and greed that have existed for centuries.

If you go to Brooklyn's West Indian Day Parade, you'll see black people holding up signs like "Jewish Businesses Take Money from the Black Community," "Jewish Landlords Drive Blacks into Poverty," "No Jewish Businesses. No Asian Businesses. Only Shop Black." The mainstreaming of anti-Semitism among urban blacks has been aided by bigoted leaders such as Louis Farrakhan and Al Sharpton. Farrakhan has referred to Jews as termites on Twitter without incurring a suspension, evidence that the Left enables anti-Semitism. Referring to trans people by their biological gender, on the other hand, can get you banned from the platform for life, as journalist Meghan Murphy discovered earlier this year.

Back in 1991, when Al Sharpton was obese and dressed in a track suit, he stoked a three-day race riot against Jews in Crown Heights. A marauding pack of about 30 yelling “Kill a Jew” fatally knifed Yankel Rosenbaum, a Jew from Australia. But Sharpton's tawdry past hasn't affected his role as a Democratic Party kingmaker.

A group called Americans Against Anti-Semitism sent a representative to the Jersey City murder site immediately after the shootings to offer support. That person recorded some disturbing quotes by black bystanders. One woman said, "I blame the Jews because we never had a shooting like this until they came." Another said that her children were stuck at the school across the street (the police had told them not to go out) "because of Jew shenanigans." A male bystander said to the AAA person, "If they got shot dead, that was great." Another voice can be heard saying, "Get the Jews the fuck out of here."

Two black people killing Jews because they're Jews, and thereby inconveniencing a woman's children, is "Jew shenanigans"? A person who believed he was talking to a Jew expressed joy over the slaughter of Jews while their bodies were still warm? The vicious tone of these comments, spoken openly, combined with the immediacy of the situation, tells me there's a particularly virulent strain of anti-Semitism problem in the black community. It's hard to imagine another sort of neighborhood where you'd get such a cruel reaction to cold-blooded murder.

None of those quotes—not spoken by members of a hate group—will ever make their way into the mainstream media, because they're just too raw. Neo-Nazis saying such things, of course, would be national news. That's a shame—all hate has to be exposed before it can be worked on. Talking openly about anti-Semitism in the black community will remain taboo.

This story was destined to die quickly because the media can't pin it on Trump. It wasn't even trending 24 hours later on Twitter, although "Shazam 2" was. The shooting's being investigated as an instance of "domestic terrorism," which isn't quite specific enough pinpoint the environment it sprang from. Progressives are race-obsessed, but only until the wrong race is involved. This paternalistic condescension, however, is not doing the black community any favors, unless you don't believe that Jew-hatred among the group isn't something they'd be much better off without.