Trump Style in the Oval Office 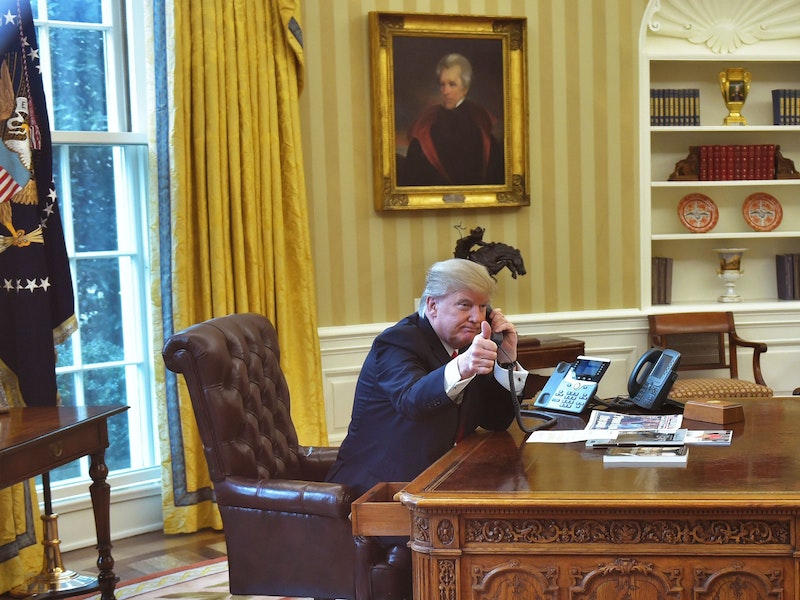 Our new boss lies about office furnishings. “He will linger on the opulence of the newly hung golden drapes, which he told a recent visitor were once used by Franklin D. Roosevelt but in fact were patterned for Bill Clinton,” says The New York Times. “Patterned” means the drapes were made for Bill Clinton, I guess. Part of the challenge in figuring out our leaders is dealing with staticky news prose. In this case what comes through is that Trump in the White House is like Trump anywhere else. Mar-a-Lago, for example. Here he is, pre-presidency, discussing the room where his daughter grew up: “Mr. Trump liked to tell guests that the nursery rhyme-themed tiles in the room were made by a young Walt Disney.” They hadn’t been. “Who cares?” Trump would say when this was pointed out. He wasn’t nasty about it, but his priorities were clear.

The drapes “patterned” for Bill Clinton were picked out by Clinton’s wife, so the F.D.R. lie comes as a relief. “She won’t be seeing them, I guess,” Trump might’ve said. “Picked them out, but hey. Will not be seeing them. All right, she could pick them out, she did that part okay.” And so on. Instead his dull upward impulse kicked in. He found a brand-name and lobbed it. For kids’ drawings, that would be Disney. For a president, Roosevelt. Perhaps it matters that he didn’t choose Reagan: he may have disloyal ideas about which president stands for number-one classiness.

Given Trump’s lies about office decor, I’m not sure Zeke Miller was wrong about the MLK bust. The Time reporter tweeted that Martin Luther King’s bust was no longer in the Oval Office. He took that back when the Trump administration said he was wrong. I admit that the bust’s there now. But I see no reason to assume it was there when Miller had his look. This was the first full day of the Trump administration. The bust might have been waiting down a corridor, parked with other goods to be carried out. Then Miller issued his tweet, Trump aides read it, and the bust was hustled back in place. After that the administration settled down to brow-beating the press about the incident. With no evidence, Sean Spicer said the tweet was “deliberately false.” All right, I say Trump’s people are lying and the tweet was correct.

I do have some evidence, though it’s only suggestive. From the Times paragraph about the drapes: “Flanking his desk are portraits of Presidents Thomas Jefferson and Andrew Jackson.” Jefferson and Jackson are both Democrats; in fact they built the party’s foundations. For Democrats today, Jefferson has become somebody to be explained and apologized for, while Jackson’s an outright embarrassment (consider the Trail of Tears). One admirable thing all Republicans have in common is that they weren’t slave-holders. Trump could’ve picked Reagan and Lincoln, but he chose otherwise. You say that Jefferson and Jackson, the great disruptors, sent a signal to Trump’s populist, anti-elite base? I say that particular signal has rarely been good news for non-whites. Further, I suspect that Trump had to be told about Jefferson and Jackson, and that whoever did the telling has some ideas about keeping the non-whites down. Meanwhile, I look forward to reading about the décor of Steve Bannon’s office, drapes and all.