Media needs to stop the narcissism and return to reporting. 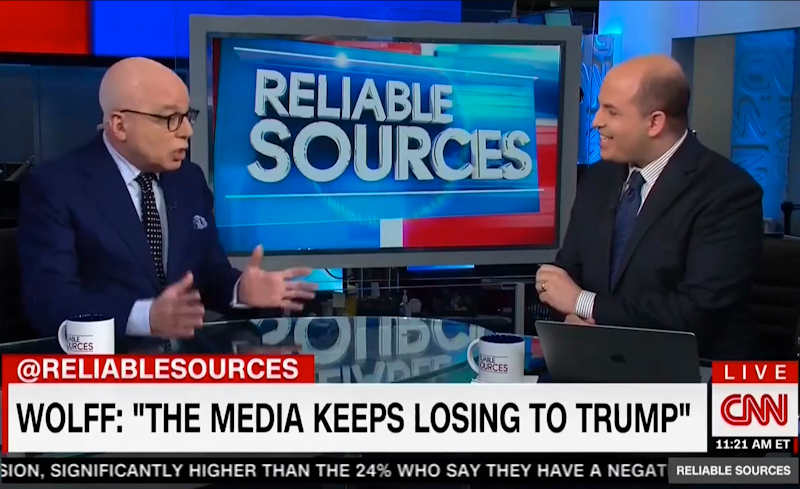 The media's been in full panic mode since Donald Trump’s stunning victory last November. The transition to any Republican would've been painful enough, given its adoration for Trump's predecessor. CNN’s Brian Stelter certainly isn't handling the post-truth presidency with equanimity, having called Trump “crazy” over his claims of massive voter fraud in California.

Veteran journalist Michael Wolff appeared on Stelter’s Reliable Sources program on Sunday and threw a bucket of ice water in the host’s anxious face. Stelter’s urged the media to “shout out the facts” in response to the President's steady prevaricating, but Wolff wasn't buying the shrill approach. Tossing all pretense of journalistic collegiality aside, he told his host that he “can border on being quite a ridiculous figure.”

For those who dislike Trump but are tired of Stelter's overwrought presentation (one that his annoying high-pitched vocal delivery can make even less palatable), it was a satisfying moment. His self-righteousness had gone unchecked in the progressive media bubble for too long. Wolff’s point was Stelter's agitated response to Trump’s is more about a personal affront than the President’s unorthodox style.

Stelter could be right to fear Trump's assault on the media and the Constitution, but Wolff suggested that he and much of the media have crossed the line that's supposed to separate journalists from activists. Stelter had a hair-trigger response to the story of the man who claimed he'd been kicked off a Delta flight in December for speaking Arabic. He tweeted the story to his 400,000 followers, and it went viral, but the guy turned out to be a prankster with an easily verifiable history. Stelter's job as a journalist was to check that out first, which would’ve required a simple Google search. The CNN correspondent once called Sean Hannity “a deplorable” for his wild speculation on Hillary Clinton's alleged health issues.

Jon Stewart famously went on CNN’s Crossfire over a decade ago and blasted co-host Tucker Carlson, calling him “a dick.” It's difficult to recall a similarly vicious media-on-media hit occurring again until Wolff slapped Stelter. He was honest enough to admit that he was partially sucking up to the Trump administration for access, but he rightfully scolded Stelter and other media figures who appear to be making it all about themselves and their own discomfort.

Stelter sees himself as the relentless fact-checker who's going to stand up to Trump's fusillade of lies, but as Wolff suggested he's already disqualified himself as an objective reporter with his clear anti-Trump bias. He can't keep his emotions in check. Stelter once made an appearance on The Charlie Rose Show, where he condemned Hillary Clinton critics who he claimed actually want her to die. Stelter clearly wants Trump’s political career to die, so why should we rely on his reporting? When you brag about the retweets you're getting on a bogus airline story you didn't do your due diligence on, you've announced that you don't hold yourself accountable to the same standards you hold others to.

I know someone who accidentally set himself on fire at work and ran around in a mad panic. His boss had to punch him in the face to stop him from fanning his own flames, and it saved him. In the best-case scenario, Wolff’s takedown of Stelter would accomplish something similar. He's saying that the media need to put aside the narcissism of focusing on their own virtue and recall what it means to practice actual journalism. Hyperventilating isn't the right approach.