The resistance against Trump doesn’t need any spokespeople. 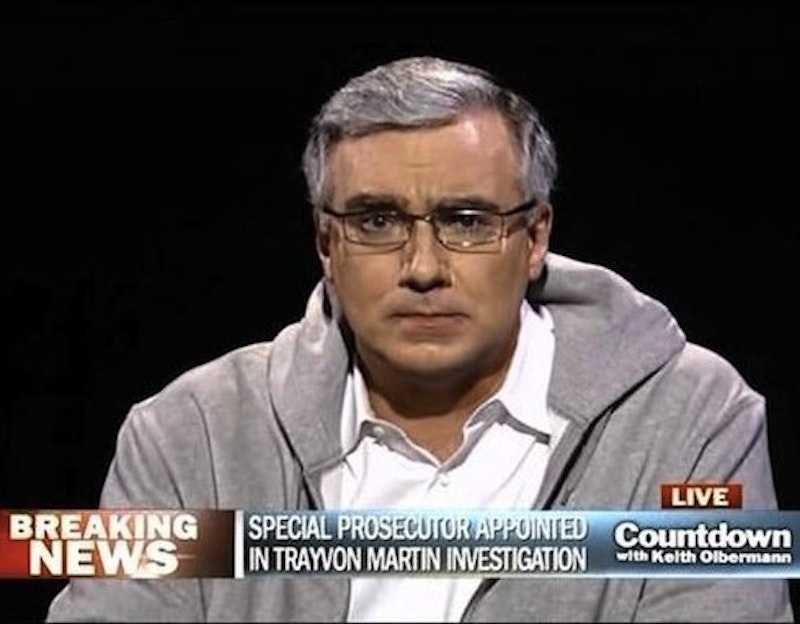 The front page of The Washington Post yesterday morning was grim. This was hours before the President Trump tweeted, in all caps: “SEE YOU IN COURT”—to a judge (?). No, the front page wasn’t taken up by photos of Jeff Sessions, Betsy DeVos, or Elizabeth Warren, either. It was Keith Olbermann, his name in obituary-sized font. Instead of a death notice, there was this: “Have liberals found their combative new leader in… Keith Olbermann?” Follow me down into the void as we shout “no, no, no, no” until our voices are hoarse and our throats so shredded our shrieks bring more and more blood each time. This simply cannot be. Now I’m convinced there will never be another Democratic president for years—four months after the shells hit, and we’re looking to Keith Olbermann? Is he even worth the payola it took to get this shit printed?

I guess he has a new show, a “web series.” Awesome. GQ is hosting it, footing the bill. Giving time, space, and money to this moron who flamed out years ago, completely useless the moment George W. Bush left office. He might’ve had some fun with Tea Party loons, but Olbermann is no spokesman. He remains unctuous, arrogant, histrionic, and dim-witted: on Real Time with Bill Maher, he called Trump’s inauguration a “bloodless coup.” How clever. His new show is called The Resistance: videos sometimes get two million views. Yawn. The Alex Jones episode of The Joe Rogan Experience had that in two days. The whole piece is a slobbering blowjob, mostly harmless (his show is going nowhere), but this bit really sucks: “Olbermann may have claimed ‘The Resistance’ as his show’s title, but it’s also fashionable shorthand for the emerging, amorphous community—career Democrats, masked anarchists, Hollywood liberals, conservative Never Trumpers—working to topple, or at least rein in, President Trump. Not working together, mind you: the movement has only the barest organization and no true leaders. But plenty of people are looking to fill that void and, in some cases, pave their own path back to relevance.”

Whoa, whoa, whoa, stop the clock. Please do not include anyone but the masked anarchists in this. Why haven’t we thrown out every career Democrat, Hollywood liberal, and conservative Never Trumper into a big burlap sack with the Clintons yet? Meryl Streep is not going to save us any more than Keith Olbermann. The beautiful thing about the protests following the inauguration was the absence of leaders. January 21 was a glimpse into the fantasy of John Lennon’s “Imagine.” Everything since has been glorious, righteous indignation: there will be no “resistance fatigue.” This is not Occupy. Everyone feels an urgency to get involved now that they’ve seen how history can be dynamic, how it can all fold in on itself before our eyes. The rise of young Democratic Socialists attending meetings and organizing must have a lot of career Democrats quaking, trying their best to come up with another strategy, anything other than “we’re not Trump.”

Olbermann is just more old hat, though to be honest I’d rather have an angry asshole in D.C. than on TV, or online. Whatever. Olbermann would certainly make a better Senate Minority Leader than Chuck Schumer, another idiot with no new ideas. I’m encouraged by the amount of people yelling at their representatives, and how our hatred and utter incredulity at the Donald Trump presidency has brought so many of us together, and forced everyone to pay attention. We don’t need to look at any one person in particular for guidance.