An interview with a street medic debunking protest myths. 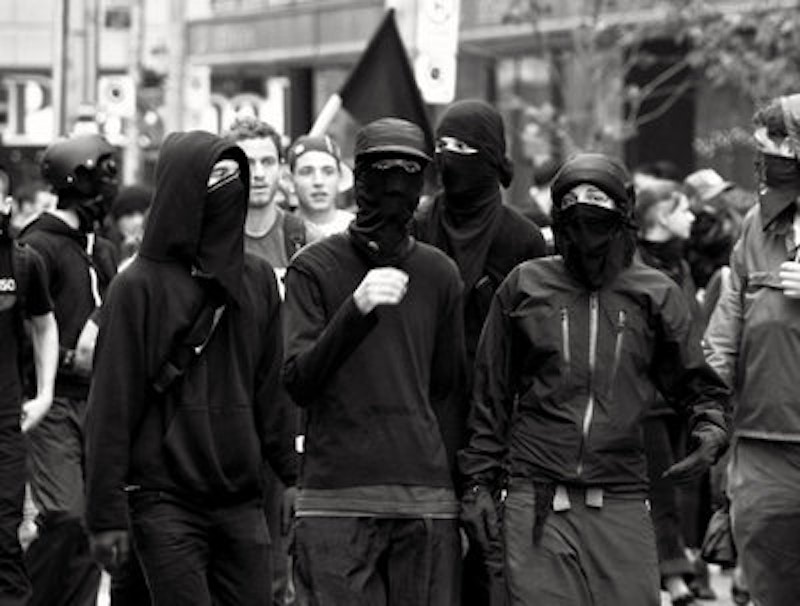 During the debates about protests and violence following the election, I've learned a lot from following a Twitter user and writer who goes by the name Lirael Lowenstein. Lowenstein has been working as a street medic since 2011; she started in an Occupy camp med tent and has since medicked at protests in 12 states plus the District of Columbia, Quebec, and Palestine.

Lowenstein’s careful to explain that street medics are not protestors themselves, though sometimes they identify with protest causes. Their role is to provide first aid and medical attention. "I want to be really clear here that I'm speaking for myself and from my own experience, just like anyone else would. I'm certainly not speaking for all street medics, or all people who go to protests," she told me.

But while she's not an organizer or protestor at most actions, Lowenstein’s been on the ground during a lot of protests, which gives her a very different perspective from journalists and commentators who, for the most part, have not. I interviewed her by email about her experiences, and what the mainstream media often gets wrong about protest.

Splice Today: What are some of the most common myths you see in reporting about protests?

Lirael Lowenstein: One is that protests are amorphous, and either formally planned in great detail like the Women's Marches, or not planned at all. I hated this one so much during Occupy. The camp I worked at had a tremendous amount of role specialization. You had the medics, the Media Working Group, the Logistics Working Group, the Direct Action Working Group, the Food Working Group, etc. Leaderless didn't mean lack of structure; you couldn't run a camp for weeks or months with no structure! Protests require organizing.

As a medic, I intensely dislike the "Anything police do that doesn't look dramatic like tear gas isn't really violence against protesters" slant of a lot of protest coverage, where they're looking for something that looks cool in a photograph. Batons have largely inflicted the worst injuries I’ve seen. A direct hit of pepper spray usually affects someone more strongly than getting hit by part of a tear gas cloud. Hits with fists or hard objects, hitting people against hard objects, those can and do hurt people. Stress positions can hurt people. I've known someone who was long-term disabled by a handcuff injury. And sexual violence, reporters usually aren't able to see that when it happens.

And then, this is more of a pop culture comment than reporting I think, but there's a remarkably popular idea that protests are glamorous and people go to them instead of doing "real" (usually this means electoral) organizing work because they're so easy and fun. Protests are really physical, and the longer they go the more physical they are. You're often sleep-deprived, you're usually not eating normal foods on your normal schedule, and you may not have regular restroom access.

The weather may be bad—I've had both heat exhaustion and hypothermia while medicking, and I know how to protect against those better than most people do. I've seen people get trenchfoot. And sometimes people get hurt really badly; sometimes it has lasting psychological effects.

ST: In the reporting on the women's march, there was a lot of discussion about how the protest was non-violent and a model to follow. Do you agree with that?

LL: I thought that was not a good framing. I don't mean any disrespect to the Women's March; it was a great action. But first of all, there's nothing inherently superior about protests at which nobody was arrested and there was no violence. Do we think that lunch counter sit-ins during the Civil Rights Movement, or marches where Martin Luther King Jr., John Lewis, many other organizers and marchers, were attacked or arrested, were not how protests should be done?

Second, there are a lot of factors that influence how police respond both to protests and to individual protesters, even protests that are meant to have similar risk levels. Race is an obvious one and a lot of people have brought that up. Perceived class comes into it too, as does perception that protesters are LGBTQ, and many other identities. Ideological stereotypes come into it—anarchism and Black liberation, for example, are two ideologies that are commonly seen as warranting violent response in a way that mainstream liberalism is not.

Crowd size matters (in my experience, the safest protests are the smallest and the largest), amount and tone of mainstream media coverage matter, march routes matter, city and precinct matter. If you have a bunch of respectable, influential people, like well-known politicians or nonprofit or business leaders, participating in your protest, that matters too. Whether you're staging a direct challenge to state regulation of dissent matters—as the ACLU will tell you, and sell you a t-shirt to tell others, you have the right to protest without a permit, but police still often interact with it differently than they do permitted, carefully negotiated protests, even if they shouldn't.

Finally, when you hold something like the Women's Marches up and say "This is how protests should be done, unlike this other protest where people got hurt," consider the impact you're having on the people who got hurt.

I'm going to use myself as an example here. I acted as a medic at the Inauguration protests in DC, the Disrupt J20 protests, starting with the protest of the DeploraBall (the alt-right Inauguration party) the night before, and going all through the next day. The day of the Women's March, I was doing jail support for the previous day's arrestees, sitting at the courthouse waiting for them to be released so that they could get some first aid, watching thousands of Women's Marchers walk by.

I'd been treating people's injuries for a day and a half before then and I treated them all that day once they started getting released. Pepper spray, head wounds, broken bones, grenade shrapnel, burns. I was still hearing the grenade bangs in my head.

And then, especially the next day on the bus home, I saw some of the commentary, and it was so upsetting. When you elevate one protest by putting down another that way, it's like a knife in the back to people who were at the other. And it suggests a level of protester control over how police react that's well beyond what protesters have.

ST: What steps could be taken to reduce violence at protests, in your view?

LL: I think it's important to recognize that violence at protests mostly comes from the state, from the police. I'm always amazed at how often the phrase "violent protests" is used to describe protests where the police were violent. A lot is people responding to police violence, trying to defend themselves or others.

Clear expectations among activists around particular actions are good. People should have some idea of what kind of protest they're going to. When you have multiple actions going on in the same city on the same day and they have very different approaches, my experience is that they try to give each other some time separation or some space, or both, so that you don't have Confrontational Antifa Action and Parents With Little Kids Permitted Rally crashing into each other. By and large, nobody is happy when actions collide like that.

I've learned that if you ask 10 different people for a definition of violence at protests, you'll get at least 10 different answers! I've run into people who think that any protective gear, like the swim goggles that I carry as protection against pepper spray or a rubber bullet to the eye, makes a protest violent, because it's signaling that you expect trouble and because they see any self-defense, even if it's not harming or threatening other people, as violent! I've run into people who think that burning a flag is violent even if it's your own property.

ST: There's been a lot of discussion of the evils of black bloc. What is black bloc?

LL: A big myth lately is that there's an anarchist organization called Black Bloc that goes around turning unwitting peaceful protests violent. A black bloc is a tactic in which people are anonymous and act collectively by dressing in black, covering their faces, and usually, moving as a group or set of groups.

You aren't required to be an anarchist to be in a black bloc. It's not a proper noun. And having medicked protests with black blocs in several different states, I've only seen attempts to escalate protests that were not intended to escalate, rather than simply participate in them, a couple of times, and only when it was a small number of jerks and not a large organized bloc. There's the tendency to claim that anything protesters did that you didn't like was the black bloc. Other people can, and do, escalate situations, or behave in ways that show disregard for local activists who have to live with the aftermath of what they do.

One thing that people rarely talk about, that I have been trying to get into the discussion, is that it's very common for black blocs to take protective roles at a protest. For example, at the DC protest of the DeploraBall, people from the black bloc were going into more dangerous spots with me to move injured people to safer areas. They were finding and flagging down medics for people who needed help. They and other medics were the ones circling around working medics to stop alt-righters or anyone else from getting to them, which a few people were trying to do. They helped me take someone to the clinic who needed more help than I could give in the field.

I've also seen situations where people were in black blocs because they were worried about sexual violence and wanted to hide a female-coded body shape or features that would be perceived as queer or trans, from police or counter-protesters.

Or where they were trying to guard against police harassment between actions. Or where they had an employer who would fire them if it got out that they were at the protest. Many people who protest neo-Nazis or are afraid of being doxed and targeted for violence by neo-Nazis and may run in black blocs for that reason.

These people aren't abstractions to me and I'll be damned if I don't speak up when some people want to throw all of them under the bus. I've had a couple of people tell me that my feelings don't matter because we're in such a crisis right now, but how do you expect to build and sustain effective movements if you don't care about people's feelings? About building relationships? How do you then avoid falling apart or burning out? How effective are you going to be if you alienate experienced activists?