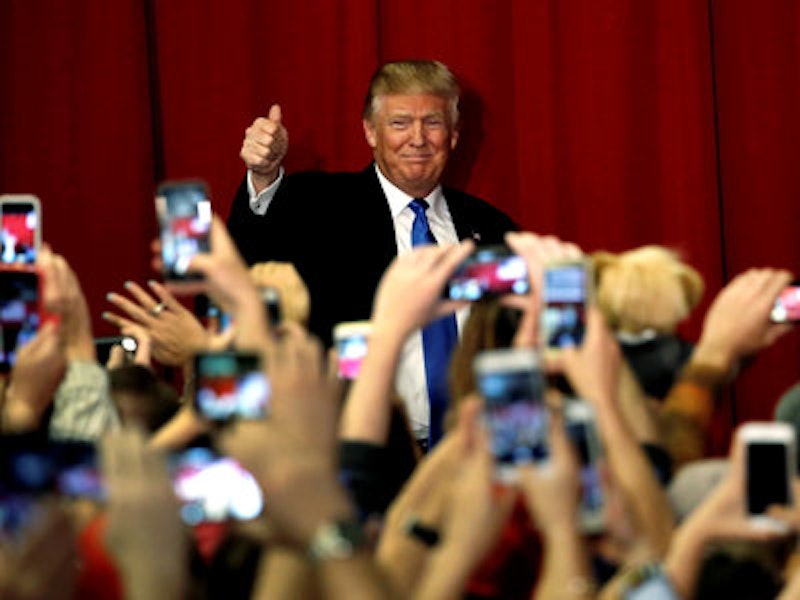 Two of the most memorable and lethal political commercials ever to flutter across America’s television screens were the Daisy spot in Lyndon Johnson’s 1964 presidential campaign and Hubert H. Humphrey’s laughing commercial mocking Spiro T. Agnew in 1968. Both could be revived today and used against Donald Trump.

The Daisy commercial, replayed repeatedly as an exemplar over the half century since it first appeared only once, shows a little girl counting petals on a daisy and freeze-frames when she reaches 10. At that point a background voice intones a countdown to zero which triggers a visual nuclear explosion when Johnson’s voice takes over: “These are the stakes, to make a world in which all God’s children can live, or to go into the darkness. Either we must love each other or we must die.”

Republicans were outraged. They claimed the commercial accused Sen. Barry Goldwater, the Republican candidate, of having an itchy finger on the nuclear trigger. Yet nowhere in the commercial was Goldwater’s name mentioned. The association of Goldwater and nuclear carnage was subliminally implanted in the minds of voters based on statements that Goldwater had made in which he favored the use of tactical atomic weapons. The guess is that not a word of protest would be heard if the same commercial were used against Trump.

The second spot features the voice of Humphrey laughing hysterically as the words “Agnew for vice president?” appear on the screen. The laughing intensifies, then fades as the words appear, “This would be funny if it weren’t so serious.” Even Republicans would probably enjoy such a laugh about Trump if it didn’t hurt so much.

Both commercials were created by the late Tony Schwartz, the creative genius who practically invented modern political advertising and won an Oscar and a Tony for his sound and visual effects on Broadway and in Hollywood. And when Schwartz died a few years ago, the entire collection of his work was scooped up by the Library of Congress where it now resides. Schwartz spent a lifetime defending the Daisy commercial against accusations (and observations) that it was the mother of all negative political commercials. To the contrary, Schwartz argued, the Daisy spot was the most positive political spot ever made. No names were mentioned and it was truly a statement of indisputable fact.

Either commercial, or derivatives thereof, could be aired at some point in this year’s campaign with devastating effect. Trump (assuming he is ratified as the Republican nominee) is viewed as an irresponsible and reckless candidate who says he would assign nuclear weapons to whichever nations apply. And Yes, Trump’s candidacy is funny but deadly serious and the joke is on the Republican Party which created the hostile political environment wherein a candidate such as Trump can thrive.

There is growing evidence, however, that the assistance of such enduring commercials—which prove, incidentally, that the history of political campaigns does repeat itself—may not be necessary. Trump, like his casinos and other business ventures, has a knack for self-implosion. Trump’s unfavorable rating in recent polls has climbed as high as 70 percent overall and as high as 90 percent among women, and just shy of that among blacks and Hispanics. (Hillary Clinton ranks slightly better, with an unfavorable of 50 percent, but in the latest matchup she’s widened the gap to a 12-point lead over Trump.) To index Trump’s supporters, the best-selling T-shirt among young males at Trump rallies, according to The Washington Post, is one with the logo – “Trump That Bitch!”

Nonetheless, Hillary Clinton has launched a $7.8 million ad buy in eight battleground states, none of it savaging Trump but commercials that her campaign says will re-introduce Clinton—mind you, the most recognizable woman in the world—to American voters. Translation: they’re presenting the softer side of Clinton, the candidate who loves kids and animals and who is not really the woman of the logo on the Trump-rally T-shirt.

All of which raises a pertinent question for campaign 2016: are television commercials as effective, or even as relevant, as they once were as a mainstay of campaigns, in the age of Twitter, Facebook and cable news? Trump’s a case in point. He’s been running for a year, hasn’t spent a dime on advertising, yet he dispatched 16 better-known rivals—most of them widely recognized elected officials—and appears to have secured the GOP nomination (unless it is snatched away from him by rebellious convention delegates).

Trump’s able to generate wholesale media coverage—good and bad, but mostly bad—using his thumbs. His Twitter account not only reaches his broad base of followers, but is also actively monitored by the print and electronic media which translates into daily headlines and live as well as phone-in appearances on TV. Trump has dismissed the media as “scum” and a reporter as “sleaze.” Trump has also stripped many reporters and news organizations (i.e., The Washington Post, Politico, The Hill) of their credentials but they still report on his campaign as much for the unexpected as for the entertainment that he’s made politics. The significant difference is, of course, with free media a candidate usually must respond to questions that could stray into dangerous or unfamiliar areas. With paid commercials, candidates present their case and frame their message how they want it delivered and received by voters.

Clinton has lately picked up on the idea of free coverage, too. She’s accelerating her Twittering and increasing press availabilities as the thumbnail messaging generates opportunities. This is Trump’s great contribution, if nothing else, to politics. To illustrate how far we’ve come, 25 years ago, Hillary’s husband, President Bill Clinton, pioneered what was then called the “Fax attack”—the quick response employing that bothersome paper medium artifact, the Fax machine, which replaced the water cooler as the office gathering spot.

Purists would no doubt further refine the difference between Twitter and TV as the distinction between narrowcasting and broadcasting—reaching a defined but limited audience as opposed to a wide, inclusive audience. But Twitter and TV have become so intertwined that they’re almost reliant on each other rather than competitive mediums in bringing a candidate’s views and statements to the public. Twitter has also become a vital reporter’s tool, linking those in the field and on the trail with anchors and producers in the studio. Candidates realized Twitter’s possibilities before the broadcast media did. Political campaigns and consultants are usually a step ahead of the public and the media who are too busy analyzing the last previous campaign. Campaigns advance hand-in-hand with technology.

Another point of confusion that pops up every four years is the distinction among positive, negative and attack advertising. Positive ads are obvious—a benign and cuddly presentation of a candidate’s biography, views and statements, kind of like getting-to-know-the real-me stuff that Clinton has up and running. Attack ads are taking rivals’ words and positions and shoving them back down their throats. Attack ads, properly done, are, by their very nature, positive ads. And negative ads are, simply, the reckless, intentional misuse of information, true or untrue, the kind of distortion of the truth that Trump engages in almost daily.

Trump has lots of catching up to do if he intends to match Clinton ad-dollar for ad-dollar. To be sure, at the appropriate time, probably leading up to the GOP convention and after Labor Day, the Clinton campaign will pound Trump relentlessly with his own words and actions. Clinton has the campaign funds to support a massive media effort. Trump has only begun to raise money and seems disinclined to spend his own, even as many usually reliable GOP contributors are turning their backs on him. In case Trump doesn’t know it, media is one of the three principal building blocks of a campaign. The other two are money and organization. And so far, he has displayed none of the three.