Tolerance, rather than respect, would be a better approach. 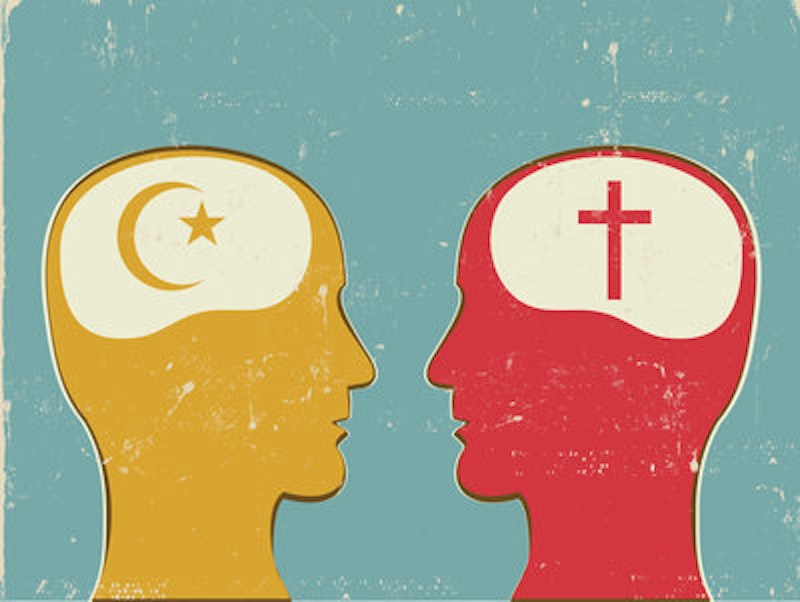 Is Islam an inherently violent religion? Is Christianity? Which is more inherently violent, or does neither contain any seeds of violence? These are important questions, but straightforward answers are rare, given the emotions and taboos inherent to public discussion of religion. Too much slick talk and phony outrage shrouds the facts. The religious will never admit to any flaws in their belief system, which is always "perfect." To those who blindly defend a religion not their own, ascribing any negative outcomes to that religion, or criticizing their teachings and practices, is prima facie evidence that you're a bigot. When you mess with deep beliefs, expect the worst.

A barrier to objectively measuring religions is the societal view, especially on the liberal side, that all religions must be respected. Tolerance, rather than respect, would be a better approach. Do liberals and the other "respect religion" people really respect Scientology, which also has religious tax-free status? Xenu, the galactic dictator, brought his people to Teegeeack—which the earth used to be called—75 million years ago? I'll tolerate it though, because people believe all kinds of crazy stuff that doesn't affect me.

Scientology's just a cult, but who's to say what a "real" religion is? In one sense, they're all cults that just vary in size. Why is the Xenu story less believable than God's son, Christ, rising from the dead, or ruthless military leader Mohammed actually being God's prophet? All three stories were invented by humans, and a betting person would say that the odds are staggeringly long on all three scenarios.

As for inherent violence in the world's two leading religions, start with a comparison of their central figures. Jesus, if he existed, was essentially the first hippie on earth. Mohammed, on the other hand, was more the warlord type. One got crucified and the other conquered.

There’s no equivalent in Islam of Jesus' admonition on church and state: "So give back to Caesar what is Caesar's, and to God what is God's." While the developed world routinely discusses church and state as separate issues, within Islam this isn’t the norm. Muslims have a tendency to view geopolitical events through a theological lens. When the U.S. invaded Iraq, Muslims were outraged because it was an invasion by non-Muslims rather than an attempt to remove a non-religious despot. Because of the Iraq invasion, some Muslims can now be convinced to kill non-Muslims who had nothing to do with it. Their crime is not being a Muslim.

Both Islam and Christianity divide of the world into two groups—believers and non-believers. The Quran, much of which is devoted to non-Muslims, calls Muslims "the best of all people." Its treatment of non-believers is much less kind, in some parts, but in other parts it speaks of tolerating others. Still, I could make a good case for Islam being the most inherently violent religion in the world. If it's between Islam and Christianity, which is how it's framed, I don't think it's a difficult call. When you separate the world into the "good" people and the "not so good" people—and Christianity has done this too—then you’ve created a worldview that can tolerate certain kinds of violence. There’s very little Christian outrage over Muslim deaths in the Middle East, but Christian deaths are another matter because Christians value Christian lives more than Muslim lives. Muslim terrorists find it easier to kill non-Muslims because their lives mean less.

In Islam, the believer/non-believer binary manifests itself explicitly in the religion's approach to apostasy. Quran, 4.89: "If they turn their backs, take them, and slay them wherever you find them." Some say this is taken out of context and doesn’t prescribe the death penalty for apostates, but the Hadith—the second most important book in the Islam canon—is full of references to executing people for leaving the religion. Including Sudan, anti-apostasy measures were in effect in more than half the countries in the Middle East-North Africa region as of 2012. In some of them, the penalty is death. This is not a religion of peace.

My criticism of Islam can't be interpreted as a bias in favor of Christianity. I believe the world would become a better place if both Islam and Christianity disappeared overnight. Much of the tribalism and magical thinking that impedes progress would be eliminated. The points I bring up here make me an automatic "Islamophobe" to many Muslims and people on the left, but this word was invented to blunt any criticism of Islam. The left criticizes Christianity freely, though nobody is accused of "Christianophobia." To these people, I'd mention that all of the critiques I've presented here came directly from a conversation I had with someone brought up Muslim in a Muslim-majority nation. Some of his family members are trying to recruit him into ISIS now, but he won't join. He told me there's a "massive stealth Islamist movement" underway in the U.S. now, and that in a couple decades it will show and people won't know how it happened. If he's right, the people who call everyone Islamophobes will have a lot to answer for.