Don’t Burn It All Down

The nihilists are nigh. 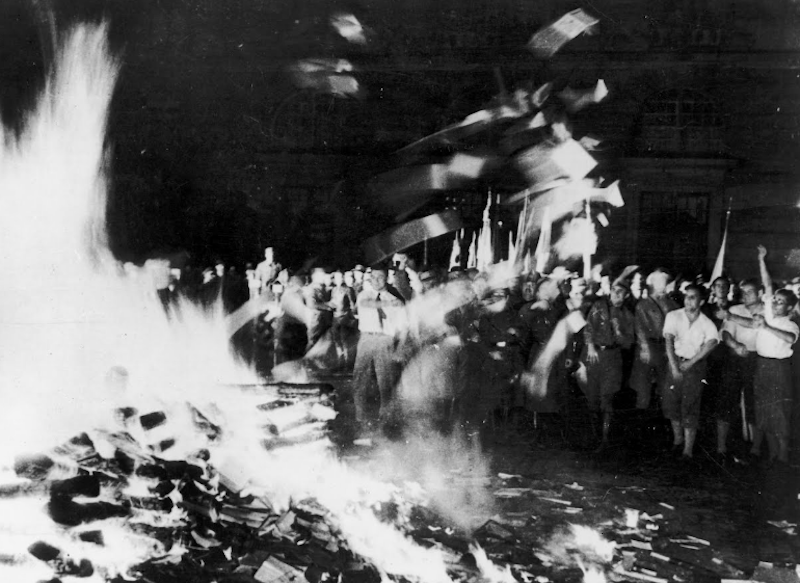 They say a cynic is a disappointed idealist. I’m not giving up on liberating humanity, but as a busy fellow, I’m going to write just one more week of politics columns and then a week of more pop-cultural observations, then take a break, at least for now, from the grind of daily column-writing. People sometimes, though, feel the temptation to say, “I give up—burn it all down!”

That’s probably what some think motivates my relative lack of alarm about climate change, about which comedian Amy Schumer was nice enough to interview me recently (as well as asking about my book, Libertarianism for Beginners). That awful movie I [Heart] Huckabee’s was certainly based on the vile premise that one is either a left-environmentalist or an utter nihilist. I think one can be skeptical of climate alarmism out of a rational trust in science, technology, increasing wealth, and the usefulness of rational risk assessment—at the very least, it’s hard to deny climate skeptics tend to be optimists.

The real nihilists in this world are the sickos who don’t care about declining language standards, such as the erosion in use of the Oxford comma. I was thrilled, in fact, to learn from Vox (which sometimes happens) that the earliest known explicit defender of the Oxford comma was 19th-century libertarian and evolution-popularizer Herbert Spencer. Derided as a “Social Darwinist,” he just wanted those ways that were best for everyone and produced the most happiness to win out, through their own voluntary action. That’s healthy optimism. So say we all.

The young people I’ve encountered online who seem drawn to the “alternative right,” by contrast, sound as if they’ve been drawn there by cultural despair and economic frustration, as it was in Weimar. Perhaps we’ll learn their compatriot who shot and stabbed a member of the UK Parliament last week has decreased the odds of his preferred policy outcome, exiting the European Union, winning at the polls this week. But people who’ve given in to despair are bad at thinking about long-term consequences.

In fact, time and again the alt-right and Trumpers embody precisely the qualities they criticize in others as undermining civilization’s long-term survival odds: authoritarianism, hypersensitivity, a longing for fistfights, and even what they call “mott and bailey” tactics when others do it, that is, a pattern in which radical assertions are made and then immediately walked back once challenged to maintain an appearance of moderation (like medieval warriors fighting their way out to the moat and then falling back to the castle). Who does that in a more brazen and cowardly fashion than Trump?

But then, even though Trump shouldn’t be a figure people look to as a source of sanity or protection from maniacs, when Secretary of Homeland Security Jeh Johnson sympathetically likens Islamic radicals who are looked at suspiciously by the U.S. government to his own grandfather, called before HUAC for possible communist ties during the Red Scare, you can understand why common people think their choice of allies among the political elite is limited. You have to wonder how devoted Johnson is to his own job—and just how many other administration officials are subtly influenced by their long family histories of ties (like Obama’s own) to socialism, Islam, or both.

Of course, even if the UK exits the EU, it won’t exactly turn into a conservative paradise. In fact, this time next year, if Trump has won the election, we may find ourselves living in a world where the new U.S. president wants the Muslim mayor of London barred from the U.S. and—lest we forget this part—the UK Parliament has debated banning the new U.S. president from their country. The impulse to cut everyone off, in all directions, is sort of an end-times, last-round tantrum approach to the world. It’s not the sustainable way that people expecting the world to keep functioning tend to think.

The Libertarian Party, despite its dashes of radicalism, really has become our most bourgeois option, aimed at keeping commerce flowing and civility functioning.

And yet many libertarians dislike the LP and think it’s embarrassing that it even tries to have an impact. I used to think they were just self-hating, but I really overestimated the degree to which they identify with the party. Many just plain hate it, seeing it as a despised rival for the ideological space they imagine they could more effectively fill, with a more purifying fire. Strangely, some of them manage to despise the LP’s impurity while at the same time becoming cheerleaders for the not-at-all-libertarian Trump. This seems utterly irrational to me, but nihilistic despair will do that to people.

And sometimes political despair leads to a sort of manic episode, which may explain comments like those made by libertarian-turned-populist conspiracy theorist Alex Jones in a recent chat he did on Reddit. He didn’t just warn of the encroaching world government and attempts to destroy humanity; he warned that the dreaded elites may have had contact with malevolent extra-dimensional entities starting sometime around the 1840s (why then I do not know).

Well, in a world where a cop can rape a car accident victim and get sentenced to only six months—as if he were a star teen athlete or something—and a world where the Albany police chief urges parents not to let their kids outside unsupervised until age 16, maybe we are close to the end times, losing our ability to differentiate between calm normality and psychotic barbarity.

Perhaps we’ll soon find out what strange climax those extra-dimensional entities have planned for us—and if not, smash everything anyway, I guess—let in the murderers and deride the heroes because the world is terrible and it would hurt too much to keep hoping. Or so the nihilists of all parties would like us to think.