While Dana Milbank stews in a puddle of sanctimony. 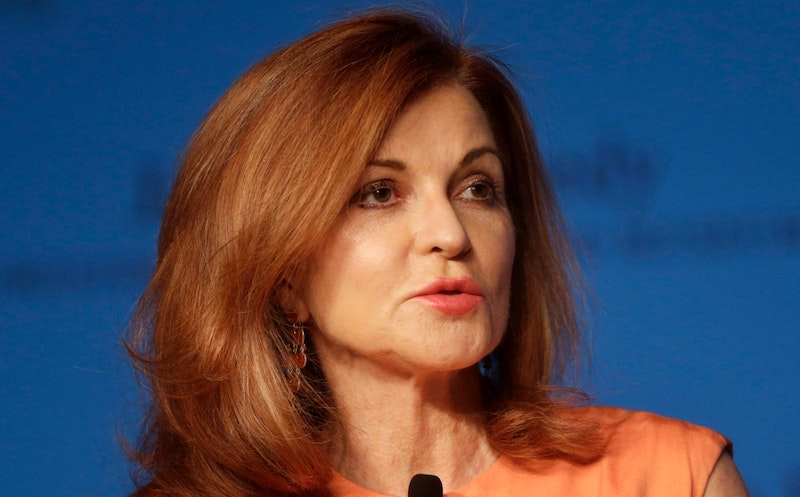 It’s not just traditional Republicans who are taking the soap these days for presumptive GOP presidential nominee Donald Trump. It’s just mid-May, two months before Trump is officially coronated in Cleveland, and op-ed pundits are starting to fold. At least that’s my perception after reading Maureen Dowd’s Sunday column in The New York Times, in which she wrote: “We are in one of those rare unharmonic convergences when reality is more absurd than satire.” And Dowd, who dutifully noted the latest string of Trump misdeeds—calling Elizabeth Warren “Pocahontas,” slagging James Baker, “Poppy Bush’s guru,” getting testy about releasing tax returns, posing as his own publicist, and that nasty butler business—didn’t say outright that she’s rooting for Trump. But all the signs are there, even if she’ll never admit it.

Dowd’s now 64, and most of her glory days are in the past—the entire Clinton presidency and especially the first administration of George W. Bush—so it’s not surprising she’s looking for a new foil to make her columns relevant again (and perhaps even funny), instead of following colleagues David Brooks and Gail Collins off the cliff into obscurity. Echoing her 2004 book Bushworld, she says, “As usual in Trumpworld, there was good news. Trump enjoys the status that comes with a Secret Service code name: ‘Mogul.’ [Paul] Ryan was friendly, if noncommittal… And, as usual in Trumpworld, there was swarming craziness and chaos.”

And if you’re Dowd, it’d be crazy not to pull for Trump’s election. If, as expected today, Hillary Clinton is the winner in November, Dowd’s screwed. How much new material can she come up with about that old hack? Reviving the blue dress, nattering about Bill’s eye for the ankle (even if he’s looking like a cadaver on the campaign trail), pounding away at the theme that Hillary’s for Hillary, and no one else? As the now-retired cliché goes, “Been there, done that.” And for Dowd (and most “elite” journalists), a Trump presidency won’t affect her much personally, unless—as extremist worrywarts speculate—he gets fidgety with the nuclear codes. But I’ve always discounted that fear: more than most candidates, Trump loves his lifestyle, and has no interest in a nuclear war disruption.

A Trump presidency, and the attendant kookiness (most of it probably trivial, silly one-liners rather than actually following through on Muslim bans, a Mexican wall and screwing too much with China) could—if she sticks to the castor oil regimen—revive Dowd’s flailing career. Her conclusion is a tip-off: “No one marvels more at his success than Trump. ‘Don’t analyze it,’ he said. ‘Just do it. The other players would come up to Babe Ruth and say, ‘Babe, how do you hit the long ball?’ And he said, ‘I don’t know, man, I just hit it.’ There’s a little bit of truth in that.’”

Trump as Babe Ruth: you could write the first five chapters of Dowd’s hoped-for book, Trumpworld, in two afternoons.

Meanwhile, The Washington Post’s scold Dana Milbank, who promised to eat his print column if Trump was nominated, last week made good on that pledge, and tried to joke his way, unsuccessfully, through the first half of his column. Milbank blames “feckless Republican leaders” for not providing an alternative to Trump, as if the #NeverTrump movement was imaginary or that Ted Cruz, Marco Rubio and John Kasich and the Bush family didn’t almost daily crucify the New York interloper.

Milbank now blames his media colleagues for having too much fun covering Trump. He writes: “[Trump] is unsavory, but covering him is a guilty pleasure. And this, I would argue, is the dirty secret of the news media in this election… Too often we tend to ‘vote the story’ and devote lavish coverage to that which produces the most conflict, the most outrage—and the largest audience.”

Well, there’s an original insight, Dana! The media’s infatuation with Trump, even when tearing him a new one, is hardly a “dirty secret.” The real “dirty secret” is that Washington Post editors allow burnt-out columnists to remain on the payroll.