Is the Twilight Zone weird enough for our world? 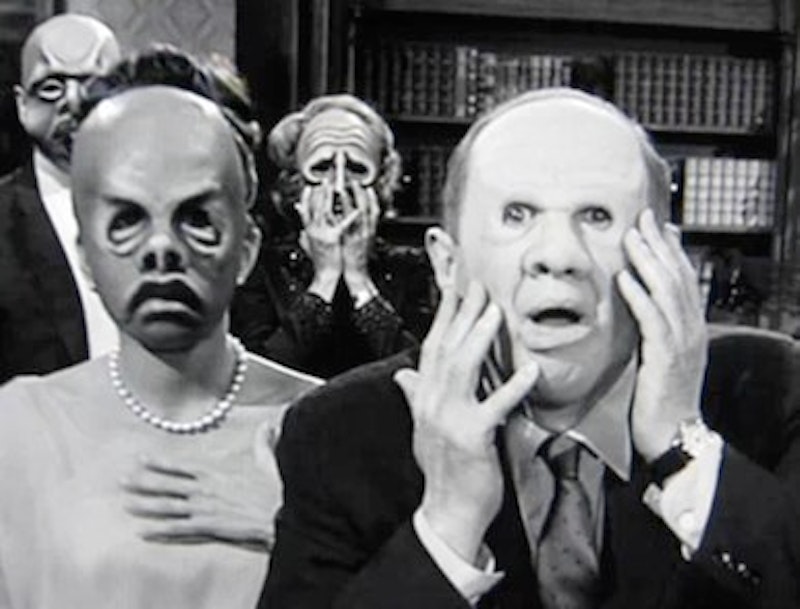 The past few days brought the 20th anniversary of The Matrix, the debut of the fourth version of the Twilight Zone TV series, and April Fool’s Day—all traditions that look quaint now, given how strange everyday life is. Each of these things was meant to throw us off-kilter, be an encounter with the illusory, with trickster gods—but they’re all tame compared to everyday reality in 2019.

I mean, April Fool’s Day implies that you will only suffer being constantly duped one day a year—one day! Yet now we know most scientific studies’ results are never replicated, priests are secretly raping children, and public relations firms are helping news agencies coordinate their messages with those spread by other companies and by politicians (the past few days, for instance, saw Huffington Post reporter Yashar Ali recounting his shock at NBC/MSNBC political editor Dafna Linzer calling to berate him for reporting a story that might prove inconvenient to the Democratic National Committee, as if that should matter to honest reporters). You’re duped on 1000 fronts every day, and the odds are you like it that way, even resent people who try to disillusion you.

Strange as the various incarnations of The Twilight Zone have been, they’ve all been grounded in a strong and reassuring tone of moralism. Whether it’s Rod Serling appearing at the end of an episode to tell us that the irrational mob with torches ended up destroying itself or Jordan Peele warning us in more left-wing fashion that doom awaited a stand-up comedian who stopped mocking the Second Amendment like a good liberal and started mocking his personal enemies, you usually exit the Twilight Zone with the sense that the universe delivers just desserts to bad guys. In the real world, evidence mounts that psychopaths dominate all social systems, whether in the private or public sector, and there may be no escape.

And even The Matrix, with its suggestion, startling in 1999, that reality is a computer-generated illusion, presented a fairly coherent vision of reality. It had a few glitches now and then, but how much difference did it make in the end whether reality-as-we-know-it was created by nature, God, or programmers, as long as it all hangs together and you can figure out the working rules of physics or kung fu within that reality? In a pinch, you could live in the Matrix, so long as it was stable and predictable.

Imagine, by contrast, the fast-approaching world of “augmented reality,” constant, variable digital patches—personalized ones but surely not ones adopted without external social, political, and economic pressure—overlaid on the natural physical world and each other. We may be living in the final few precious years of humans having a shared perceived universe, the last time when children are taught to make a sharp distinction between what’s real and what’s an illusion.

Soon, when someone says, “For me, Chicago is vibrant blue and always has phalanxes of dragons in the sky above,” you won’t assume they’re on drugs or insane. You’ll just nod and know which app they’re using with their sunglasses. Don’t expect them to be too devoted to a shared conception of history, cosmology, or perhaps even math, unless perhaps they’re experts in those fields. Media shapes worldviews.

It’s fitting (perhaps non-coincidental?) that the anniversary of The Matrix, directed by the transsexual Wachowski siblings, was also the annual Trans Day of Visibility. Many liberals continue to recoil from any criticism of the trans movement, as if the movement were nothing more than a logical extension of the tolerance rightly shown to gays and other marginal people (and, to be clear, rightly shown to trans people as well), but as the reality-warping, anarchist Wachowskis are surely aware, there’s a difference between asking people to tolerate you and asking that people treat your subjective mental state as if it obviously countermands biology and language by fiat. Yet the more fluid reality in general comes to seem, the weaker any objections on the ground of old-fashioned things like biological facts or shared language conventions will seem.

It’s probably a safe bet we’ll get at least one episode of the new Twilight Zone dealing with racist cops, which is fine—they’re a problem, the kind of old-fashioned moral problem about which the original Twilight Zone was well-equipped to moralize—but in what passes for the real world, by contrast, we see so many layers of unreality that a popular actor fakes his own beating by racists, with the liberal political establishment not only coordinating his release without charges but, thanks to two 2020 Democratic presidential candidates in the Senate, planning attendant (and redundant) anti-lynching legislation to address the non-existent crime and shame a nation.

Adding to the strangeness, strangeness of a kind I’ll bet won’t be depicted on The Twilight Zone, conservatives look on and are left hoping that the reason the actor was let off the hook might be that the government wants him to testify against his own lawyer, who’s implicated along with attorney Michael Avenatti in trying to shake down Nike—while Avenatti has in turn been involved in negotiations, in a separate case, between prosecutors and the celebrity sex cult NXIVM, which stands accused of human trafficking and the violent abuse of migrant women and children. A Seagram’s heiress tied to the NXIVM cult fainted in court when she learned that Avenatti had secretly been involved in her defense but had now been arrested.

So to summarize just that one chain of current events among thousands of others: the actor who faked a crime may have gotten off because of ties to past or future presidents, or because investigators noticed his lawyer was in cahoots with another, corrupt lawyer who was shaking down a major corporation while defending heiresses and their migrant-abusing celebrity sex cult. How can it be that people still angrily take sides on such news items, as if they understand what the hell is going on? Yet they compulsively do.

And so I look back at Rod Serling, with love, as a man who wished the world could be explained by an organizing principle as straightforward as “The genie granted wishes that turned out to be misfortunes for the greedy” or “Those astronauts were unwittingly on Earth the whole time” (as in his Planet of the Apes script or more than a few Twilight Zone episodes). Where we seem to be headed, though, there are no two-sentence moral summaries at the end of each half hour. There are few signposts. I’m no longer even sure there was ever a road, though it was right here just yesterday, I tell you. I’m sure of it.