Everything’s clearer after Brexit, even in Democratic Maryland. 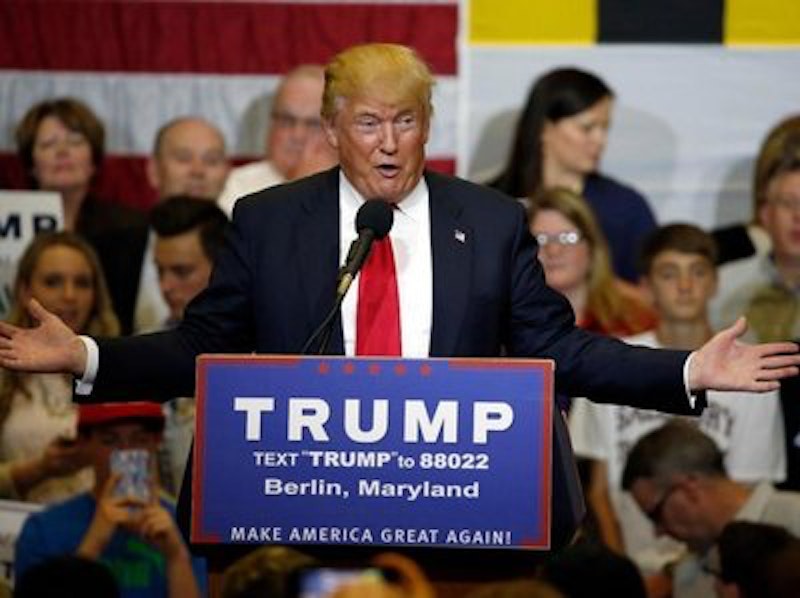 Larry Hogan is enjoying the best of two worlds: He’s the enormously popular Republican governor of the lopsided Democratic state of Maryland and he’s disowned the GOP candidate for president—saying he won’t even vote for Donald Trump—much to the annoyance of his right-wing base but to the consternation of the Democrats who’d like to knock him off in two years.

After weeks of deflecting questions about his presidential preference, mainly because of his close association with Trump’s sideman, fellow Republican Gov. Chris Christie of New Jersey, Hogan finally blurted out that he has no patience for Trump and would decide how to vote for anybody but Trump on Election Day. Long before that definitive declaration, Hogan said he’d sit out the GOP convention in Cleveland as well. Hogan has been more brazen than any other top-tier Republican in pushing off the toxic Trump.

However, following Brexit, which authorized the United Kingdom to withdraw from the European Union, Hogan may want to ruminate over his brash brush-aside of Trump. The same angry build-a-wall, anti-immigration, take-back-our-country nationalist forces that animated Brexit are driving Trump’s “Make America Great Again” campaign. And the distressed manufacturing areas of the UK that voted for Brexit eerily parallel the rust-belt demographics in America where Trump is strongest. Trump has received fresh impetus from Brexit and with it his supporters have been given renewed purpose. His one-note campaign should no longer be treated as a passing whim by those who say it can’t happen here.

Hogan’s not the first Maryland elected official to defy his party and deny support for its presidential nominee in a big brass-band way. That merit badge belongs to Theodore R. McKeldin Jr., Baltimore’s liberal and last Republican mayor. McKeldin was a key speaker at the 1964 GOP national convention in San Francisco, which included Spiro T. Agnew, then executive of Baltimore County. McKeldin was there to advocate for civil rights; Agnew’s mission was to block the nomination of Barry Goldwater. When Goldwater won the GOP nomination, McKeldin recoiled and refused to endorse the party’s choice; Agnew caved in and went along with the party and backed Goldwater.

When the action shifted to the Democratic National Convention in Atlantic City, many Maryland delegates were convinced they could persuade McKeldin to endorse President Lyndon Johnson. Eventually they did. McKeldin endorsed the Democrat for president at a massive rally at the Fifth Regiment Armory in Baltimore. After the 1964 presidential election, Johnson offered McKeldin a gesture of his gratitude—the job of mayor of the District of Columbia, which at the time was a presidential appointment. McKeldin declined. He told the President he appreciated the offer, but that “the job should go to a black man.” It did. Walter Washington became the first black mayor of the nation’s capital.

Another reversal of loyalties changed the course of history in Maryland. In 1966, George P. Mahoney squeezed through a field of four Democrats to win the primary election for governor by 2000 votes. Mahoney would face Agnew in November. Mahoney had won with what was viewed as a segregationist slogan, “Your home is your castle.” Agnew was considered a moderate on racial issues at the time. The face-off caused a loyalty tug for the chairman of the Democratic party of the moment, Marvin Mandel. Many of Mandel’s allies, including his eventual political patron, Irv Kovens, were already aligned with Agnew because of a bitter political rivalry with political boss James Jack Pollock, who supported Mahoney. Mandel, also the Democratic speaker of the House of Delegates, began quietly choreographing the shift of Democratic support to Agnew (who originally was a Democrat). The election of Agnew was the yellow brick road that eventually led to Mandel becoming governor in 1969 when Agnew advanced to vice president. (Mandel had planned to run against Agnew in 1970 regardless.)

There are other stories of hold-outs, indiscretions and betrayals. In 1960, for example, Millard J. Tawes, Maryland’s Democratic governor, warned John F. Kennedy to stay out of Maryland because the Democratic power structure was solidly behind Lyndon Johnson for president in the primary election. But the voters had other ideas. Kennedy captivated the state with his charm and purchasing power. Again, in 1964, Johnson, by now president, asked Tawes to run as a surrogate against George C. Wallace, in Maryland’s presidential primary. Tawes was terrified of losing. Instead, he suggested Sen. Daniel B. Brewster, a handsome war hero and gentleman jockey, as a stand-in, who defeated Wallace by 50,000 votes. Johnson viewed Tawes as a political genius. Johnson showed his appreciation by enriching Tawes’ friends, including Tawes’ son, Philip, with government largesse and favors through Tidewater Insurance.

Then, of course, there’s Maryland’s chronically dyspeptic outlier, William Donald Schaefer. Schaefer was a Democrat in name but essentially apolitical and a switch-hitter. But if he were forced to declare his true feelings, he’d most likely have said Republican. Take, for instance, his immaculate conversion in 1992, when, as governor, he became all teary-eyed over a solicitous phone call he received from President George W. Bush. Schaefer was so overwhelmed that he endorsed the Republican for reelection as president.

In 2000, by then in an afterlife as comptroller, Schaefer bypassed the Democratic convention in Los Angeles because, frankly, he wasn’t invited. It didn’t take long, but Schaefer was on the outs with Gov. Parris Glendening, his successor and seat-mate on the Board of Public Works where they feuded regularly. In the primary election that year, Schaefer had endorsed Sen. Bill Bradley over Al Gore. So Glendening, miffed, as chairman of the Maryland convention delegation, didn’t offer Schaefer a delegate’s seat even though he was entitled to super delegate epaulettes as one of the state’s top four elected officials.

But the snub, or was it his Dutch-uncle stubbornness, from the persnickety Schaefer that every political hobbyist remembers is his decision as mayor to bypass the 1984 Democratic convention in San Francisco in favor of a visit to the San Diego Zoo. That was the convention of the historic first when Walter Mondale chose Geraldine Ferraro as his running-mate. And as they appear miraculously overnight during political conventions, the souvenir buttons on sale the next day proclaimed the Democratic ticket of “Fritz and Tits.”

So there are many comic opera precedents for Hogan’s cold shoulder toward Trump in the androgynous politics of Maryland. An anti-Trump sub-group of more than 400 super delegates and delegates—the latest and most serious in a rolling attempt to block the billionaire candidate who has enough delegates to capture the GOP nomination—has banded together in common cause to take its grievance to the Republican convention in Cleveland in July. But there’s no indication that Hogan is lending his name or his sentiments to any such wishful effort. As Hogan has said, he’s just plain fed up with national politics.

As a footnote, maybe even a counterpoint, to Hogan’s stiff-arm of Trump, the Maryland electorate is roiling and beginning to shift in discernable numbers. For the first time in recent history, the Republican registration in Maryland has surpassed one million and growing. The most recent GOP numbers posted are 1.004 million, though still outnumbered two-one by Democrats whose numbers appear static at 2.108 million. Voters are registering Republican for a reason. Trump romped through Maryland in the primary, so it could be that Hogan has misread his own Maryland party.