Is John Oliver the Best We Can Do?

On Brexit he makes noise but not a case. 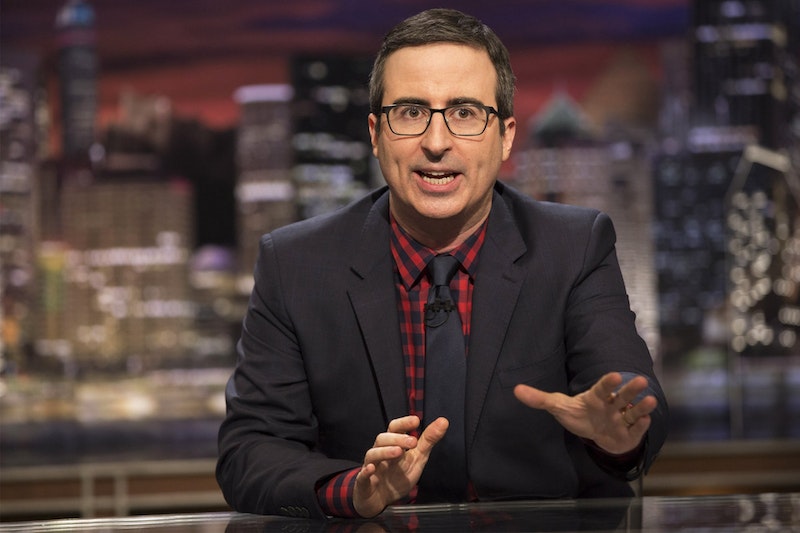 John Oliver is talked up as comedy TV’s reigning explainer of big issues. His old boss, Jon Stewart, improved on the job done by cable news analysts, and now Oliver presents deluxe 15-minute versions of what Stewart used to do. An Oliver segment can wade into an issue and keep on wading. He splashed about with Brexit and admirers applauded. But I think he didn’t make a case. Two-thirds of one, and that’s good by cable standards, but really the standards ought to be higher.

“To recap: immigration policy may not change, hysteria over regulation is a red herring, the costs of membership are reasonable, and the economic benefits of staying appear to outweigh the cost, and yet, polls suggest my homeland is on the edge of doing something absolutely insane,” Oliver tells us. All right, I’d say the bit about regulation is a direct hit. Oliver took a film made by the “Leave” forces and showed that, out of 10 European Union rules allegedly having to do with pillows, three of the rules just had the word “pillow” in them. And the “Leave” film claimed that the 10 rules on view were mere samples of 109 pillow-related edicts from the EU. If the evidence has to be fluffed up so shamelessly, there probably isn’t much evidence on hand.

But the other points in Oliver’s indictment are wobbly. First, why should we think Britain won’t be able to set its own immigration policy? The only evidence is a clip with a young professor who says the EU wouldn’t put up with it. But other professors might disagree; how do we know? The logic claimed by Oliver is that Britain wants free trade with the EU, and that the EU’s rules must come along with free trade. True for making and selling products: if you want to sell to a market, you’d better meet the market’s statutory requirements. (Again, product regulation really isn’t a good reason to leave the Union.) But free trade doesn’t require foreigners to come and go in the country where their goods end up. The EU may insist that it should, or try to insist. But the group isn’t bound to by the logic of the situation.

Second, “the costs of membership are reasonable.” I expect that they are, but we can’t tell from Oliver’s segment. A graphic puts Britain’s net weekly EU contribution at £190 million, and says that, “as a proportion of our GDP,” the figure “makes sound fiscal sense.” Okay, but what proportion is it? We aren’t told. The graphic is a spoof of “Leave” campaigner Boris Johnson’s red bus, which had on its side a bold claim that Britain sent the EU £350 million a week and that instead Britain ought to fund its health care system. The spoof corrects, or “corrects,” the claim and then vamps. The side of the red bus gets filled up with white type (“oh shit, we’re running out of bus!”). The idea is that the new claim is much more sensible and nuanced than the first. But there’s no space for a key fact that would let us know if the claim is true.

Oliver says the £350 million figure has been “thoroughly debunked” because the EU sends back much of the money, what with rebates and spending programs. But the “Leave” campaign’s slogan is #TakeControl. Its followers don’t want to hand over their money and then hope some will find its way back. They want control over the money. Johnson uses the phrase in the segment’s one clip where he gets to speak. “We have a once-in-a-lifetime opportunity to take back control in this country of huge sums of money that we send every year to Brussels,” he says. “About £350 million a week we do not control.” That’s the entire clip. I’d say he’s clear about his theme.

Third, “the economic benefits of staying appear to outweigh the cost.” The segment doesn’t explain why that would be or give facts to show that it’s the case. Instead we hear about the “overwhelming consensus” that leaving is a bad idea. There’s a pile-up of logos behind Oliver as he reels off the nations and bodies that want Britain to stick with the Union. The weight of expert opinion has to be considered, but it’s not an argument. After watching Oliver’s slambang, devastating takedown of Brexit, I couldn’t tell a “Leave” devotee why Britain ought to stay. I could say the “Leave” side was full of it regarding pillows and, by extension, product regulation. But I’d have to add that John Oliver ought to do less mugging and more thinking.