But Trump's a Hugo Chavez-style strongman. 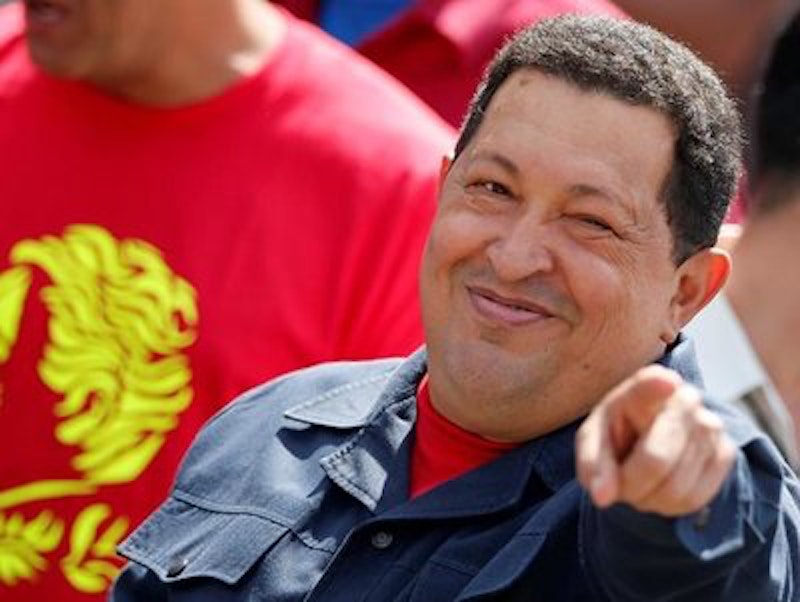 "The media effort to label Donald Trump as an authoritarian is absurd." That's’ the lede of a June 22 Wall Street Journal article by WSJ assistant editor James Freeman, "Clinton, Obama, Trump and the abuse of power." He starts out well by pointing out that the authors of an oft-cited study concluding that conservatism is correlated with an authoritarian personality have issued a correction. As it turns out, they found out that left-wing views correlate with authoritarianism. Both sides have their share of authoritarianism, but the GOP is attracting most of it currently.

Freeman disappoints quickly, however. The syllogism he's trying to establish: "Conservatives are not correlated with an authoritarian personality. Donald Trump is a conservative. Therefore, Trump is not an authoritarian." The study never concluded a conservative couldn't be an authoritarian, and the second premise isn't true. Trump’s not really a conservative, which he demonstrates regularly, as when he recently said he'd talk to the NRA about keeping guns from people on the no-fly list. Such talk is anathema to true conservatives concerned with deprivation of due process to anyone, including suspected terrorists.

Freeman calls for pundits who’ve claimed Trump is an authoritarian to offer corrections as well, without offering any evidence. He doesn't even bother to mention and defend any of the myriad things Trump has said that’ve sounded warning bells, as would be expected. The article is written with the tone that we're just supposed to take his word for it.

The writer is overplaying his hand if he actually believes it's "absurd" to believe Trump is an authoritarian. I'm not convinced he knows what an authoritarian really is. Authoritarianism is a term political scientists use for a worldview that values order and authority and distrusts outsiders and social change. People turn to it in troubled times, and Trump is exploiting this. He'll return them to a simpler time when diversity, gay marriage, etc. weren't concerns. He'll wall the Mexicans out and keep visas from the Muslims. Then he'll "bomb the shit out of" the worst of them. His followers believe he'll protect them and willingly submit to his authority in return. That's the bargain.

Freeman credits Trump with modifying his stance on banning all Muslims from coming to the U.S. into a ban on people only from terrorism-connected nations, but he only modified it after receiving heavy criticism. Trump’s first impulse is always the authoritarian one, and then he dials it back if it's not palatable. "Mr. Trump has made mean-spirited remarks about all kinds of people," the WSJ editor writes. "But does this mean he's marching the U.S. towards Nuremberg?" People aren't saying that Trump is an authoritarian because he has a mean streak. They're saying it for things like speaking admiringly of the "power" and "strength" the Chinese government demonstrated when its soldiers opened fire with automatic weapons on students in Tiananmen Square. They're saying it because Trump threatens to use his office to go after his enemies like Jeff Bezos.

When Freeman makes the Nuremberg reference he's playing a game. That game is to make it seem like people are saying Trump's the next Hitler, making them look alarmist and silly. Contemporary strongmen are the best ones for Trump comparisons, with the closest being Venezuela's Hugo Chavez. Both had TV shows, and both used language the same way, vilifying their opponents with tough words—"stupid, "idiots," and "disgusting," for Trump, and "assholes," and "squealing pigs," for Chavez. Both have used colorful speaking styles that connected them personally with their audience, and both made outrageous statements regularly. Compare Trump with Chavez, not Hitler, and you look much more reasonable, and don't forget that Chavez ended up inflicting great pain on his nation with his governing style.

"The facts suggest that Mrs. Clinton is more likely to abuse liberties than Mr. Trump," the writer claims, because she's currently under investigation for her emails, but that speaks more to an arrogance of not having to play by regular rules more than to depriving others of their liberties. Freeman also mentions that Clinton's stated she opposes the First Amendment's free speech guarantee and that she blasted the Supreme Court for allowing a movie critical of her to be distributed.

Trump’s said much worse. He’s said that he'd like to change the libel laws so he could sue the media when they criticized him. He's called an American judge a "Mexican" who couldn't be impartial based on his heritage, undermining our entire system of justice. The only part of the Constitution he's ever shown respect for is the Second Amendment. Trump is a loose cannon who appears to have no core values, which isn't to imply Clinton has them. Trump’s an authoritarian, however, and he'll use his executive action power, especially in the area of immigration, where it can be used most freely. It’s far from absurd to say this.