He’s allowed the country to have an ugly, but necessary, debate. 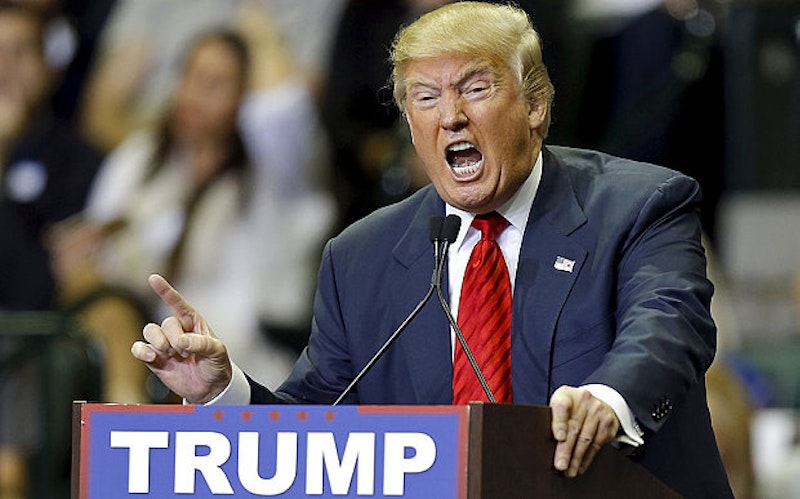 It’s fun watching the Republican Party scramble, panic, and burn, and now they have to lie in the bed they’ve been making since 2009. Contrary to whatever revisionism you’ll find on Red State or in The National Review, the Tea Party was always a fundamentally racist coalition: those initial protests after Obama’s inauguration were a visceral reaction to having a Kenyan/Muslim/Communist/Terrorist in the Oval Office. D.C. insiders and many aspiring politicians were shrewd in their use of this totally insane paranoia and anger. They insisted the Tea Party was fueled by sound conservative principles—all economic, of course—and a stand against the tyranny of Obamacare. Right. Anyone with half a brain could see these people were pissed that America had elected a black man. Paul Ryan and Reince Priebus can prevaricate all they want, but they did nothing to stop the kooks from taking over their party. When Obama’s nationality was debated, the GOP establishment took their time seeing how it would all play out. Why not? His middle name is Hussein…

So Ryan’s pathetic refusal to endorse Donald Trump is too little too late, and better for Trump than a proper endorsement anyway. Same for the Bush family—Trump’s as hard on Bush 43 as Obama, and wow, what a surprise, lots of people love it. Trump’s campaign has been a very positive and productive bloodletting of the modern American psyche. The fact that his political style has captivated so many on the right, in the middle, and even on the left shows that we have some blisters that need popping. Better address white nationalism head-on than let it continue to simmer and expand. None of this craziness will go away if Hillary Clinton is elected, but having Trump as a vessel at least everything to come to the surface When 40 percent of Republicans believe Obama is a Muslim, without any evidence except his name and the color of his skin, we need a demagogue like Trump to foment the bigotry and fear into something clearer than dog whistles and code. Even the over-educated Republicans writers, pundits and TV commentators can’t see, or refuse to see, the connection between decades of race-baiting and a reluctance to fully denounce the birthers and the phenomenon of Trump 2016. He’s mainlining it, guys. Don’t be shocked by Trump—he’s playing a character, and everyone is falling for it.

Ben Howe is one such deluded Republican, eager to distance himself from the pandemonium that he inadvertently admits he helped organize: “It started way back in 2009-2010 when the Tea Party erupted on the scene. At the core of the tea party was a principle that I agreed with so much that I became a conservative activist during that time period. That core was principled, fiscal conservatism and a desire to return to the things that had made America great. […] We said it lots of different ways back then. ‘Take our country back.’ ‘Return to the Constitution.’ It really is embodied quite nicely in Donald Trump’s motto: Make America great again.”

Your point, Ben? “Social issues weren’t discussed that much in the very early stages of the Tea Party.” Oh, bullshit. It was always a movement borne out of distrust and a resentment of a black Democratic president. Cut and dry. Blaming the Tea Party for Donald Trump is a red herring: he’s not running against Obama or even George W. Bush. He’s running against globalization, and speaking to people that did everything they were supposed to do: pay their taxes, go to school, get a job, get a house, buy products. Let’s be thankful we’re having this fight now rather than later, because people are only going to get more paranoid and poorer from here on out.