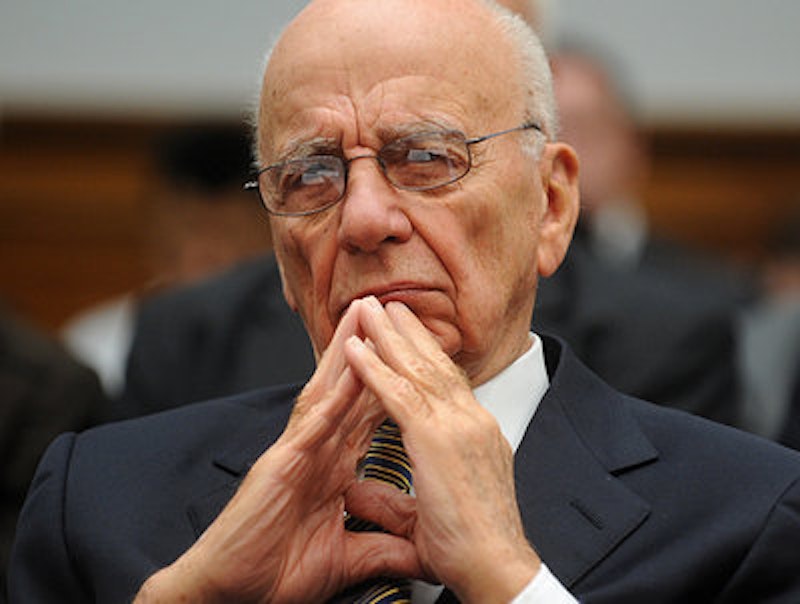 Old age and Donald Trump have Roger Ailes on the hop. “But it seems Ailes has neutralized any threat to the throne—for now,” writes Gabriel Sherman, who covers Fox News for New York. That was his summing up in April. A few months before that he had Roger Ailes on the ropes. Rupert Murdoch, owner of Fox News, was pushing aside the man who had always run the operation. “According to four high-placed Fox sources, Murdoch is upping his presence at Fox while Ailes has become less visible to anchors and producers, signaling a shift that marks a new chapter in the network’s history,” Sherman said gravely.

The new piece mentions Murdoch, but just by the way. He’s a factor among factors in the firing by Ailes of Fox’s executive vice president for news. “Another mark against Clemente is that he had a relationship with Rupert Murdoch,” Sherman writes. “Ailes is said to dislike executives who build up independent power bases, and talking to Murdoch, Ailes’s boss, would be seen as a threat.” In January, Ailes couldn’t even gather his flunkies without the boss pushing his way in. “Murdoch has been attending Ailes’s daily executive meeting held on the second floor of Fox headquarters,” Sherman wrote. One imagines that people shifted, poked each other. Or, as Sherman put it at the time, “Murdoch has so far been a quiet observer, but his presence at the table is striking to Fox executives.”

Now Ailes can decapitate a top flunky and Murdoch does nothing. Not only that, Murdoch isn’t at the meetings. Sherman’s new piece opens with Ailes calling together his lead executives. He thinks they’ve been saying mean things about the vice president he terminated. He fires away, “berating” them, “yelling at people.” (Sounds odd, but an executive explains, “Roger is very needy and insecure.”) Did Ailes do all this with Murdoch there? The piece doesn’t say. Did Ailes call the meeting behind Murdoch’s back? Nothing on that either. The topic of Murdoch as attendee at Ailes conclaves has disappeared. Google “Sherman Murdoch meetings Fox Ailes” and you find nothing on the subject since the January article.

This monster blip in continuity reminds me of watching Mad Men on Netflix. Lane and Pete square off and punch hell out of each other. The next episode they sit side by side at the same conference table; neither of them draws away, neither of them looks frightened or repulsed, or like he’s keeping stiff to maintain his composure. It’s embarrassing to have a fistfight in an office, and embarrassment stays with people. But the show starts a new episode and the matter is gone. Now Fox’s “new chapter” is just an old episode. I greatly enjoy Sherman’s series about office politics at Fox News, but zig-zags undermine the story’s credibility.

Voices. How are things on the right? They’re as good as this tweet from Sean Hannity: “Glad Politico let’s u use such big words that accurately describes [sic] yourself asshole. And u r ‘impartial’ to politics.” Hannity can say “asshole”? His intern can? Dafuq. I think this is new. All right, the response that I saw centered on the tweet’s anger, not its speech. Even so. We’ve been close to the line for so long that now we don’t have to step over it. We just shift our weight and a change has been made. A boyish, earnest man on TV will shout “asshole” when he doesn’t like somebody. He’ll shout it by typing, but he’ll shout it in public.