But that doesn’t guarantee a loss in November. 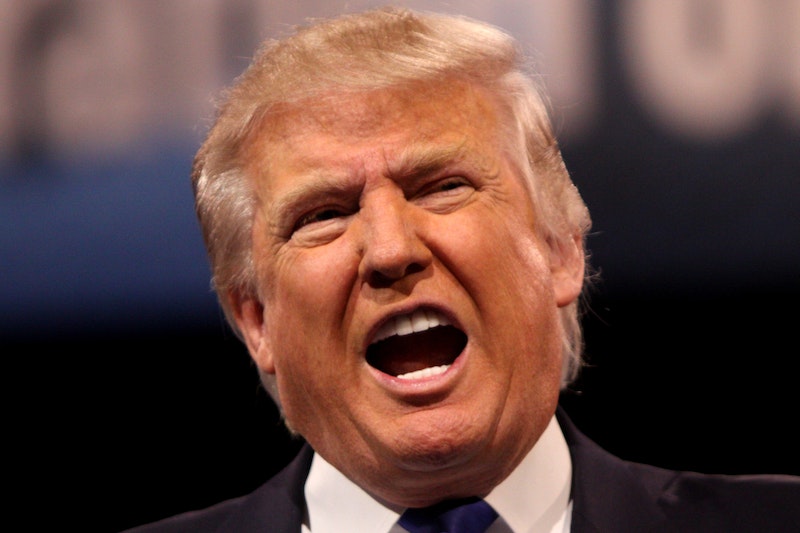 I think of this presidential election as a gender psychodrama. For one thing, if both Hillary Clinton and Donald Trump make it all the way to November without getting completely destroyed by scandal, there is likely to be an all-time gender gap, and it’s interesting that the partisan divide is becoming a war of the sexes. No doubt the outcome will depend on “swing” voters.

Earlier this week, I wrote about Hillary and gender. I argued that she's caught in a conflict between expectations for, let's say, bourgeois white women as they stood in 1960 or so and the sort of “empowerment” feminism that arose in that demographic after that. I don't think Trump has the problem of presenting an ambiguous or conflicted way of being a man. Just when you thought testosterone was obsolete, at the onset of the trans era, Trump embodies a swaggering hyper-masculinity: perhaps also 1960, but with no update.

We haven't seen a man cock strut like that on the national political stage since women got the vote, or since Teddy Roosevelt hunted big game and waved around his big stick. Trump at least updates that to 1960 Norman Mailer, making it complementary to, if also abusive towards, Hillary's alleged homemaker half.

The association of strength with masculinity is a problem, and yet manhood a la Trump still conveys a kind of strength and leadership that’s compelling, as we struggle with continuing radical shifts in gender norms. He's a throwback, but also a parody; he's almost winking at his own persona, even as he embodies it effortlessly.

The first thing to feed into this line of reflection is the way he talks. Trump is intent on conveying the fact that he doesn't care what you think. He talks politics the way guys talked back at a “stag” event: he'll even cuss you out, say the darnedest things while also being pretty hilarious. Etiquette has always been a feminine domain. Trump doesn't care much about it, nor about the new etiquette of political correctness, which consists of a thousand little prohibitions on impolite discourse.

He relishes fighting with people, or just teasing and insulting them mercilessly, like locker-room joshing with a nasty edge of domination. That's his “negotiating” style, or what in the 70s they called winning through intimidation. It's excruciatingly in tension with today's conversational norms, and people don't quite know how to respond. The entire media explodes in outrage every single day.

Trump effectively feminized Marco Rubio and Jeb Bush, for example, and they had no idea how to respond, caught between being the extremely careful party politician of today and futilely trying to man up.

If you attack him, he nukes you. He regards that as a negotiating position, or perhaps thinks he'll eventually quiet people down with the Cold War threat of mutually assured destruction. I think probably he’d also be quick to reconcile with his attackers; he doesn't necessarily take his own attacks quite seriously. One minute he loves Ben Carson, then he insults him as “very weak,” and then he incorporates him into his organization.

Obviously, he surrounds himself with beautiful women, and perhaps regards each of his wives/romantic partners as a kind of emblem of his own status, while taking pride in the beauty of his daughters. If he was the one who leaked the nude photos of Melania, that wouldn't surprise me. As he did so, he was probably still cackling about Heidi Cruz, still setting up the pecking order, as it were, still out-manning or out-gunning his opponents.

When you get down to it, men are kind of over. But even women can get nostalgic for the mannish era, when guys were breadwinners, heads of the households, world leaders, and real dickheads. Whether that gets Trump to the presidency in 2016 is another matter, but it's gotten him this far. I think he might’ve done better against a male opponent, but either way, this election is an amusing little sex drama, a Freudian frolic.