Neither party is united behind their candidate. 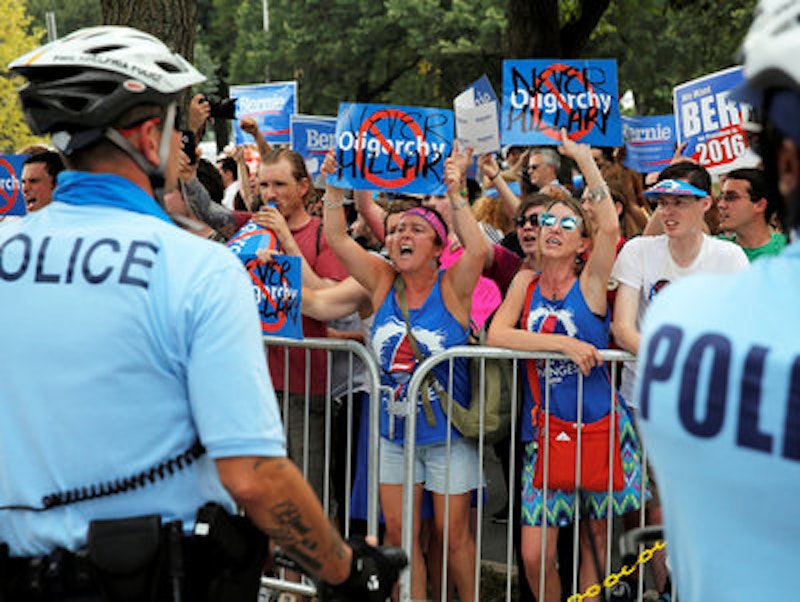 If the Republican convention in Cleveland was a requiem for America as we know it, the Democrats’ meeting in Philadelphia was a sunny-side-up multi-cultural festival of joy, optimism and patriotism. The Philly gathering had many memorable speeches and events, but none, perhaps, more remarkable than the snapshot moment of America’s first black president handing off his legacy to the woman who might become the nation’s first female president. In a deliberate case of role reversal, Democrats sounded more like Ronald Reagan’s “shining city on a hill” while Republicans peddled fear and loathing to an angry and divided nation. Democrats have stolen the values issue from Republicans.

The Democrats turned on a television show and produced a dazzling display of its best and brightest star power – President Barack Obama, First Lady Michelle Obama, Vice President Joe Biden, Sen. Elizabeth Warren, Sen. Bernie Sanders, Former President Bill Clinton – along with an A-list of celebrities unmatched in Cleveland or, perhaps, any other convention. And they even put to effective use the usually potty-mouthed comic, Sarah Silverman, who shushed boisterous Bernie die-hards, telling them they’re being “ridiculous.” The Democrats, for hobbyists who savor such occasions, conducted a master’s class tutorial on political speechmaking. Even Republican strategists were gushing over Democrats’ speeches.

Clinton’s speech was more aspirational than inspirational. Clinton’s 57-minute speech was solid but memorable mainly for its ground-breaking importance. There were too many tough acts to follow. It’s history-book value as an acceptance speech by a major party presidential nominee was that a woman was delivering it. The most sustained affirmation came from Sen. Bernie Sanders’ cheering section when Clinton acknowledged his unyielding campaign as well as the progressive agenda he forced on her and the Democratic platform. Clinton pledged to work to enact them into law.

So in the end the presidential race could come down to this: A run-away train, a stand-off or a split decision. History is not on the side of the Democrats continuing for a third term. They haven’t done it since World War II and Franklin Delano Roosevelt and they’ve managed to extend the franchise only twice since 1828. The Republicans, by contrast, have hung on for third terms four times, most recently when George H. W. Bush succeeded Ronald Reagan.

Over the 240 years since the American republic was born, there have been four presidential candidates who won the popular vote but lost the presidency in the electoral college. So tight is the ping-ponging in the preference polls between Hillary Clinton and Donald Trump that the vote-count of the electorate is a less reliable indicator than the red-and-blue map of appointed electors. The polls are about even between the candidates but the map favors the Democrat. And in a race this tight, Gary Johnson, the Libertarian candidate, polling at eight percent, could swing the popular vote either way.

The only consistent finding in the polls over the long view is that both Clinton and Trump are, to state the case charitably, flawed candidates. That insight itself raises the prospect of an exceedingly tight race. So put aside the notion that Clinton has the presidency wrapped up simply because blacks, Hispanics and women vote steadfastly Democrat. The great fear within the Clinton campaign is the number of rust-belt Democrats who have bought into Trump’s message of fear and despair. But just when it appeared that Trump was holding tight in the dead-even race, he invited Russian hackers to conduct espionage on Clinton. A conveyer belt must feed Trump loopy ideas.

The most recent candidate for president to win the popular vote but lose the presidency was Al Gore, in 2000. Gore lost to George W. Bush in the most hotly contested election in modern history, which could presage a Clinton-Trump standoff if the vote remains tight. Tactically, Gore make the mistake of appealing the Florida returns to the Supreme Court, which stopped the Florida recount (with a few arm-twists from Antonin Scalia), thereby awarding the state’s 25 electoral votes to Bush for a total of 271 to Gore’s 255. Bush won by one electoral vote. If Gore had not appealed and allowed the Florida recount to play out, he would have won the state and the presidency.

The red-blue electoral maps tell yet another story, this narrative currently favoring the Democrats but with major must-carry states in the toss-up column. Real Clear Politics, a reliable bellwether of uncertain outcomes, at present count awards states with 202 electoral votes to Clinton and her running-mate, Sen. Timothy Kaine, of Virginia, and 164 electoral votes to Trump and his understudy, Gov. Mike Pence, of Indiana.

With the conventions over, the poll bounces pocketed and about three months before decision day, the election countdown, as the polls and the maps underline, is still inconclusive, highly fluid and anybody’s thumb-sucker. Trump is a mystery. Every time he’s written off because of a blunder he bounces back stronger. And Clinton is still searching for that sweet spot called trust. Recent polls show that their negatives are about even for the first time, with Clinton’s rising and Trump’s dropping.

The Democrats’ overall convention theme was togetherness – the “Stronger Together” slogan flavored Clinton’s speech and plastered the hall; the Republicans’ unmistakable message was divide and conquer. The intention of the Democrats was to present a convention that was the inclusive face of America which it did in a convention production that was slick, detailed and precise. The Cleveland version was anything but. There were only 18 blacks in the hall. But as the Democrats’ convention was designed to energize the party’s base – blacks, Hispanics, women – it could have the exact same effect on Republican base by stiffening their resolve to vote in line with the worst-case-scenario rantings of Trump. It was on that note that Clinton made a pitch for disaffected Republicans. And there remains the unsettled question of whether the legion of disenchanted Sanders supporters will shift over to Clinton as their leader has forcefully exhorted them. While Clinton fights to retain Democratic votes and attract white-collar Republicans, there is a measurable shift of blue-collar Democrats to the Republican side of the books and Trump.

A huge bloc of voters still believes that the country is on the wrong track. The compelling test is which candidate will be viewed by voters as the agent of change. Trump, for better or worse, has already demonstrated that he is the change agent by upending the Republican establishment and capturing the party. Clinton is a methodical, step-by-step policy wonk who has the difficult task of straddling the past as well as the future. She must uphold the Obama legacy because she is part of it and at the same time convince voters that she is a person apart from it with a direction of her own. The result of the two party pep rallies is that neither party is united behind their candidate. The conventions, though entertaining, settled nothing.