The Origin of Digital Revolutionaries in The Red Web

Soldatov and Borogan's book is important for understanding modern Russia. 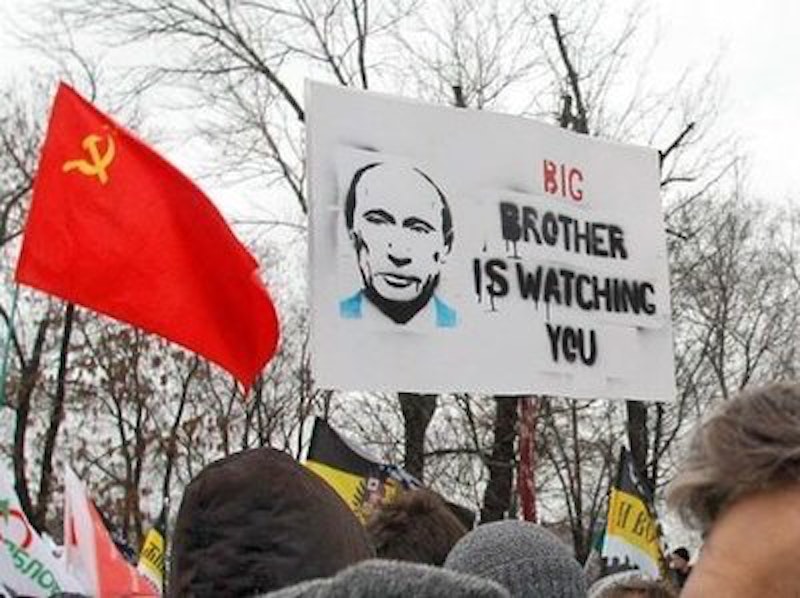 Russian hackers have become a hot topic lately, but the intersection of the Internet with the schemes of the Russian establishment (and specifically Vladimir Putin) has been a long-simmering issue. There’s a history here, and luckily enough there’s a recent book that’s a good guide to that history. One of the paradoxes of the Internet is that it’s a global technology with intensely local variations and uses. A history of the Internet has to be a history of the Internet in different places and jurisdictions. A history, in part, of how many and varied authorities around the world have tried to censor it, to slow or stop the exchange of information it makes possible—and how the nature of the technology itself tends to undermine that censorship. This tension makes up the substance of The Red Web, by Andrei Soldatov and Irina Borogan. Subtitled “The struggle between Russia’s digital dictators and the new online revolutionaries,” the book’s two epigraphs show exactly this conflict: the first is Stewart Brand’s line that “Information wants to be free,” and the second is a Soviet-era expression, “This is not a phone conversation,” implying that a subject is better discussed in person away from a tapped phone line.

Beginning in the 1950s, The Red Web moves quickly to the 21st century, giving a detailed overview of the Internet’s development and modern telecommunications in Russia before focussing in on recent Russian political controversies (up to 2015 or so) and that government’s attempts to control the Internet. The book’s obviously important for understanding modern Russia, or at least the impact of Internet technology there. There’s less to be learned than you might think about Internet surveillance in general; Putin has a dictator’s disregard for subtlety, able to act in the open where intelligence organizations in certain other countries have to be reasonably covert. Still, you can see some notable techniques. The sponsorship of groups ideologically allied to the government without being formally connected to it. The deployment of paid trolls. Personal intimidation by Putin against people who oppose him. Instances of how these sorts of things may be (or have been) applied elsewhere can be left to the reader.

The prose of The Red Web is stylistically unremarkable but tight. A lot of information is provided quickly but coherently—the organization of the book’s logical, describing the whole world of the Russian Internet, with its own social media and search engines as well as its own culture and history. The authors are journalists deeply involved in this story, two of the “digital revolutionaries” of the subtitle, co-founders and editors of the Agentura.ru website which covers issues around intelligence, terrorism, and the activities of the Russian security agencies. Both have written for major English-language news outlets in the past, and The Red Web was written in English for an English-speaking audience; details of Russian life and the Russian Internet are provided, not assumed, and on that level the book’s highly readable.

Narratively, though, Soldatov and Borogan are reluctant to take center stage. If on one level that’s understandable, given the many facets of the story they’re telling and the many different dimensions of the subject, on another level I wonder if it wouldn’t have made the book more involving. There’s a lot of material, and at times it feels shapeless, as though Soldatov and Borogan haven’t quite worked out the details of their theme.

But then that’s also perhaps a function of the book’s timeliness. Soldatov and Borogan are writing second-draft-of-history stuff: not quite the matter of today’s papers, but very recent politics, issues that still could go any which way tomorrow and in years to come. There’s a provisional sense to The Red Web, the feeling of a story that ends in the middle.

Perhaps that’s inevitable given the book’s wide range. Soldatov and Borogan deal with government surveillance, obviously, but also with how that subject plays out in Russian politics—whether in conflicts over leadership of the country, or in the implications of security procedures around the Sochi Olympics, or in military actions in Chechnya and Ukraine. The story is perhaps less a history of resistance than one of how resistance begins. It’s the origin of “digital revolutionaries.” It’s how a mass movement begins, and how organizers come out of the mass.

Edward Snowden makes an extended cameo here, but the authors present him as out-of-touch with the reality of censorship in Russia. Would-be revolutionaries will find different philosophical and practical lessons. How networks can be used, and how to avoid censorship. Crucially, and central to the book, how networks of individuals and not lone wolves like Snowden are most useful to a movement; how online organization can lead to the mobilization of vast numbers of people.

Here’s another Internet paradox, one specific to Russia: the basic structure of the technology, the distributed network, emphasizes the collective over the individual. What is Big Data but individual actions being analyzed as part of a communal data-set? And yet Vladimir Putin, a man whose ideological roots go back to his training as a KGB official, can’t seem to grasp how the technology operates—at least in The Red Web’s telling.

On the other hand, the book is presenting a story that tends to present resistance to censorship and surveillance as a historical trend. Important individuals can be neutralized or co-opted by the authorities. A whole population, connected and spreading information, can’t be stopped so easily. In that sense the authors’ decision not to put themselves at the center of the book is precisely correct. This isn’t a story about individuals. The idea of individuals as the drivers of events, of great men and women, is a subversion of a story that borrows from the horizontal structure of the Internet itself. Putin’s an individual. Those resisting him are resisting the idea of the heroic personality. To judge by The Red Web, Putin does have a sense, however vague, that the Internet represents an undermining of his authority. The book’s hope is that he’s right.