Reagan Gets Left Out of the Kimmel Debate

A mere entertainer, you say? 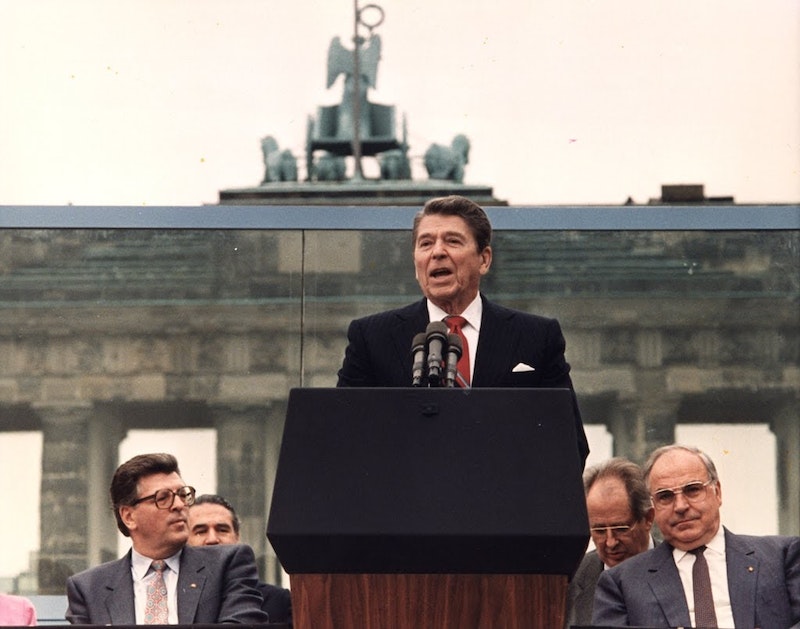 Over at National Review, Theodore Kupfer sizes up a late-night comedian and gets as National Review as you can get without talking about Ronald Reagan. This gap becomes understandable when you examine Kupfer’s point. Kupfer thinks that Jimmy Kimmel of the Kimmel Test is too ignorant to be listened to on health care. “Comedians have become public intellectuals in the popular imagination, so maybe some charity is in order,” he sighs. “We should be open to the possibility that Kimmel has deep and hidden reservoirs of knowledge on risk-adjustment programs, the Medicaid expansion, or per capita caps.” But no. “Policy expertise is hard-won and not likely to dawn suddenly during crises,” Kupfer concludes. “It’s also not something that resides in people who make jokes for a living.”

Now here’s a Reagan element, one that I’ll throw in. Jesse Jackson, Reagan’s contemporary and foe, had this to say about the last Republican president not considered a failure: “Kissinger types bitterly argued that it was absurd to expect a guy like Reagan could do anything with Gorbachev, who had about 597 volumes of Lenin, whole libraries of history and economics. And yet Reagan, not knowing any of all that stuff Kissinger had learned, not knowing any Russian except maybe vodka, sits down and gets an historic deal out of Gorbachev. He made history that all those little wannabe Kissingers in the future will spend their working lives analyzing... That’s the way it often is with the great creators. A real leader, once he moves and sets the pace and sends the word out, people say, ‘Well, now, that’s what time of day it is.’”

Does anyone think that’s wrong? I don’t claim that these people are creators, necessarily, or that Reagan (or even Jimmy Kimmel) is a great leader, but does anyone doubt that Reagan never bothered much with policy? He had principles, for better or worse, and men with briefcases fiddled over the details, and conservatives proved very happy with how it all came out. Daniel Drezner answered the Kupfer piece by reminding us that conservative pundits can make a thing of favoring experience over data crunching, and here’s Kimmel braving the health care debate because of his experience with a newborn child. I’ll add that Reagan first got ideas about taxation when he saw some Hollywood colleagues turn down movie parts because of the marginal tax rate. These ideas bulged within him, but they didn’t develop much until Art Laffer drew a curve on a napkin. The curve on the napkin did it.

But now a conservative shares with his fellow conservatives the absurdity of a non-wonk—an entertainer!—mouthing off about big-people topics. The Kupfer piece doesn’t even demonstrate that this particular non-expert has made a mistake. The piece reports that Senator Bill Cassidy, co-author of the Republican plan, says Kimmel is wrong for saying the plan wouldn’t prevent bankruptcy for families with a kid whose heart doesn’t work. Well, I guess Cassidy would say that. Then Kupfer tells us: “Kimmel has elected to probe the empirical matter of whether this bill does quite enough to erect a safety net for people with pre-existing conditions. There are legitimate critiques of Graham-Cassidy on those grounds, but at the same time, rhetoric about those with pre-existing conditions, or about the costs of reforming our current health-care system, tends toward exaggeration. And with the leeway Graham-Cassidy’s New Federalist framework would afford them, states might be able to find more efficacious ways to protect those people.”

That’s it. No errors laid to Kimmel’s door, no logic that’s been demolished. If Kimmel’s so unfit for this debate, Kupfer should point out how the comedian has made a fool of himself. Instead we learn that Kupfer and his fellow conservatives (the passage above links to an “issue brief” by the Manhattan Institute and a column by National Review’s Rich Lowry) are great skeptics regarding the liberal arguments for keeping Obamacare. We also learn that Kupfer thinks more federalism might work some health care magic—“might.” All this makes Kimmel look awful silly.

But notice the language: “Kimmel has elected to probe” and “not something that resides” and so on. Hear the fleet rustle of assonance and consonance: “Policy expertise is hard-won and not likely to dawn suddenly during crises.” This is the stylish college professor dissecting a student paper. Watch Kupfer develop his theme for a thousand words and more. This is the prof living out a dream of elegant upbraiding, a deluxe round of putting the naïve in touch with verities. Then notice that the prof can’t say what the student did wrong, and that this elegant fellow is writing about nothing and never notices. As I said, it’s a very National Review kind of piece.