Gay people not interested in the left’s intersectionality are now turning to the right. 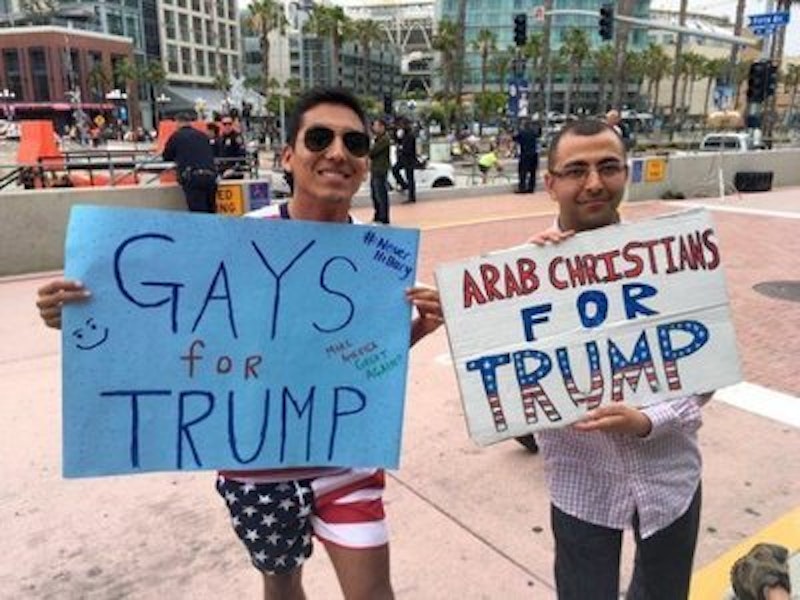 Germany’s decided to welcome hundreds of thousands of refugees from war-ravaged places such as Iraq and Syria, where a common belief is gay people should be killed. In countries with Sharia law, the state has various methods of punishing homosexuality, including execution, whippings, public humiliation, and imprisonment. Even in Western nations, there's a strong anti-gay sentiment among Muslims. A 2016 poll found that half of British Muslims think homosexuality should be illegal. Asking a gay person to champion the cause of Muslim immigration is asking them for more people who'd like to see them imprisoned. That's a hard sell, but the left’s workaround is that anything done in the name of diversity is good. If you disagree, you're a Islamophobe.

Quickly taking in around a million people from a culture that's openly hostile to LGBT people, it’s realistic that violence against that vulnerable group will increase, although this is a taboo topic that couldn't be touched when Angela Merkel made her decision. So, there's the unlikely phenomenon of a substantial number of gay people in Germany and elsewhere shifting their political loyalty to the far right.

This is what happened to to Karsten P after he and his partner were badly beaten by two Muslim refugees in Bremen, who then managed to escape to Syria and avoid arrest. Karsten, who’s afraid to reveal his entire name, has joined Germany's far-right party, the Alternative for Germany (AfD). The 52-year-old shopkeeper doesn't agree with everything the party stands for, but is drawn to it because none of the mainstream parties will address the downsides of a sudden immigrant influx.

A 2016 survey from MEN, a magazine aimed at gay makes, revealed that 17 percent of respondents supported the AfD, which is higher than the national average. Perhaps they feel that violence aimed at them under the banner of white supremacism would be roundly condemned, but have seen that when it's done in the name of Islam, the religion’s role is downplayed. Maybe they've travelled to Amsterdam and were warned that there are certain Muslim neighborhoods to avoid, and don't want to see that happen in their own nation.

There's now a word—homonationalism—originally coined by gender studies researcher Jasbir K. Puar in 2007, that's used to describe the alignment of LGBT people with the form of right-wing politics that’s also on the rise in the U.S. While it's given little mainstream media attention, this phenomenon is behind the surprising degree of support that Donald Trump enjoyed from the gay community (14 percent of the gay vote) in the November election. One homonationalist whose profile has been on the upswing since Trump's ascension is the unreliable Gateway Pundit White House correspondent, Lucian Wintrich, who oganized the controversial "Twinks4Trump" photo series which pictured provocative photos of barely legal young men clad only in MAGA hats. Wintrich believes that the best way to be transgressive as a person is as a white male who proudly supports Trump and his nationalist agenda.

The gay community, which tends to crudely label Trump supporters as racists and idiots, has been harsh on the likes of Wintrich, despite the fact that Trump's record on LGBT issues is relatively positive. He entered office in favor of gay marriage, something that wasn’t true of Barack Obama. Trump also said that Caitlyn Jenner would be free to use the ladies room when the former decathlon gold medalist visited Trump Tower last year.

The most flamboyant homonationalist, and Wintrich’s role model, is professional right-wing provocateur Milo Yiannopoulos, who calls Trump “Daddy,” and has said that that it’s suicidal for gays to support a left which “wants to turn New York into Raqqa.” Some thought the British former Breitbart editor, who's been called a racist xenophobe, sexist, transphobe and Islamophobe, was done when the conservative media outlet fired him but he's on the comeback trail now.

With recent events such as the repeal of “Don’t Ask, Don’t Tell” in 2010 and the legalization of same-sex marriage in 2015, gays have become normalized in the American mind, which has prompted some of them to ditch the intersectional approach favored by the left in favor of a movement that promotes an agenda unlinked to their sexual orientation and other social justice issues. This group, whose most financially successful member is Peter Thiel, is not particularly interested in fighting all the phobias and “isms” that Yiannopoulos is accused of. To the gay mainstream, they’re selfish Quislings to the larger cause of equality for all marginalized groups. Perhaps they’ve just lost interest in the constant battles for prime victimhood status that intersectionality promises and want to get on with their own lives.