Exhaustion sets in on the American wasteland. 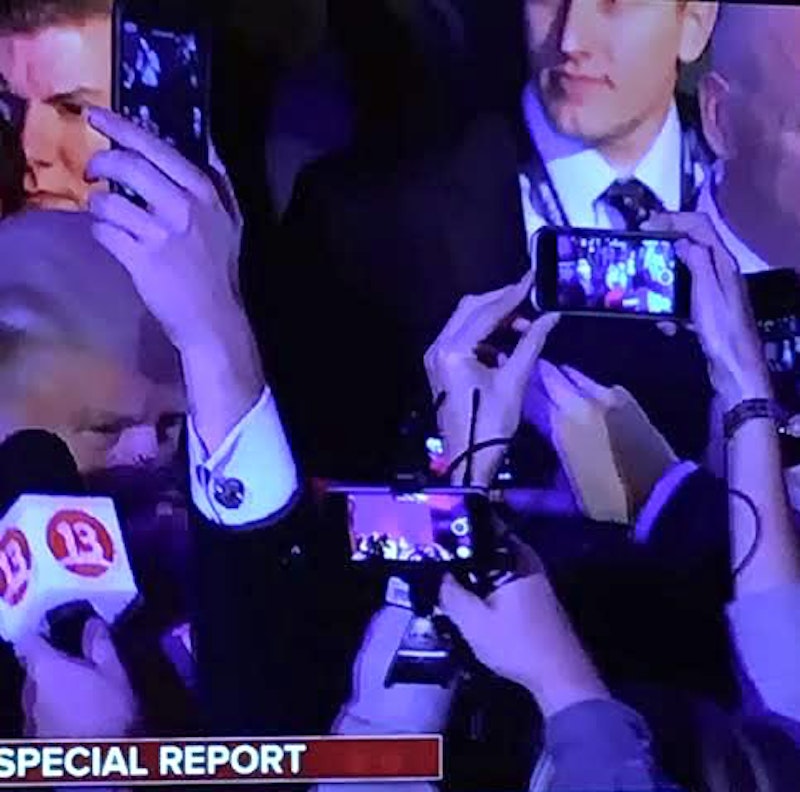 Try taking this survey provided by the Trump administration to voice your disappointment and distrust in the media. Fake? Very fake? You decide! Or perhaps you’d rather take a bath in Drano. Both are very quick, very intense ways to remind yourself that you’re a human body, and you’re in this for real. It’s fucked up. My mood: “IM TIRED OF HEARING ABOUT DONALD TRUMP AND HIS FUCK ASS ADMINISTRATION BUT I NEED TO STAY AWARE OF WHATS HAPPENING.”

I know lots of people who don’t want to say his name, don’t want to think about him, draw him, write about him. It’s all so threatening and existentially offensive to anyone who isn’t a white man. Xanax and Klonopin won on November 8th. As a news junkie it’s brutal. New stuff, definitely not bunk, but barely tested. Very risky. “In an aggressively Bill Clinton voice* “I haaate it… I haaaate it… but I love it too.”

Pointing out hypocrisy and double standards in the Trump era is useless. Nothing sticks. No bullet-pointed monologue delivered directly into the camera will change anyone’s mind. On Monday, Michael Flynn was forced to resign because he lied to the Vice President about his contact with Russia during the transition and before the election. A New York Times story said that basically everyone in the Trump campaign was in touch with the Kremlin. Awesome. His nominee for Labor Secretary, Andrew Puzder (documented wife beater), withdrew his nomination “because he was tired of all the abuse he was getting.” But the President was able to bounce back by Friday—at least in the eyes of his supporters and people like Rush Limbaugh, Matt Drudge, and Sean Hannity. Who’s the boss? Chuck Todd got cucked. I went to check the temperature by looking at Drudge (“HIS WAY”) and then HuffPo (“MELTDOWN”). This sick exchange makes it all bearable, because Trump is a stand-up comic who failed upwardly into the stratosphere: Acosta persisted in trying to ask Trump to account for having so thoroughly undermined people’s faith in the First Amendment freedom of the press with his “fake news” battle cry. But Trump couldn’t resist the chance to tease Acosta, who shares a surname with his newly announced labor-secretary nominee, Alexander Acosta.

Trump asked him, “You’re not related to our new—“

“I am not related, sir,” Acosta said. “I do like the sound of Secretary Acosta, I must say.

“I looked,” Trump said. “You know, I looked at that name. I said: ‘Wait a minute. Is there any relation there? Alex Acosta?'

Noah Berlatsky had this to say about the ad-libbed appeal: “The idea that Trump is genuine and working class because he is unprepared and ignorant is ridiculous and insulting.” He was responding to this comment: “This press conference is why @realDonaldTrump got elected.It's like he's speaking after 5pm with rustbelt workers at the factory.Genuine.” I like Noah, but have to disagree here—and won’t single out Rust Belt factory workers. A lot of people can relate to lying, being unprepared, cheating, and trying to bullshit your way through a test you didn’t study for. That’s the appeal. Resistance fatigue is real, and we must not forget: the American electorate is very stupid. Trump’s cast a wider net than anyone ever before in this wasteland. No wonder people want to tune out whenever there’s an opportunity.