Speak of the Devil

Journalism in the Trump era. 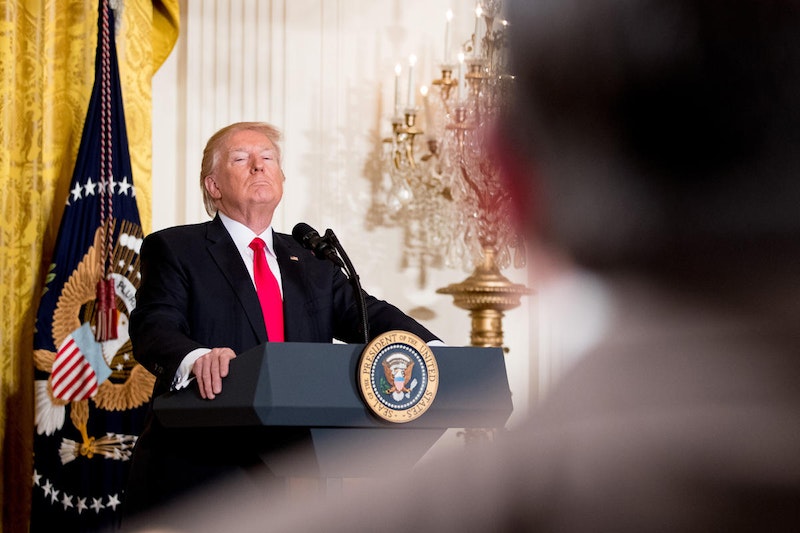 Watching Donald Trump’s Thursday's press conference made me feel like I'd finally acquired the ultimate director's cut of Dune. I now have definitive proof that Baron Harkonnen didn’t get devoured by a gargantuan sandworm at the end of David Lynch's 1984 adaptation. I always suspected that the Baron survived, but it took me 33 years to figure out what happened. Now I can at least enjoy a temporary degree of closure. Harkonnen evidently made his way to Washington, where he floats through pressers like something out of The Garden of Earthly Delights, all the more menacing for being an ignorant buffoon, all the more malevolent in his clownish obsessions.

But that's not interesting anymore, is it? We already know the ship of state is taking on bilge. We know Trump is purposeless and lost. That's been old news since the July 9, 1990 cover of People magazine: "Poor Donald! First a mid-life crisis, then public humiliation. Here's how the brash billionaire's longing for money, love, and respect brought him crashing down." We know history repeats itself and people don't change. We know he who controls the spice controls the universe. And we know the bottom of the sea will be a dark and lonesome place.

I read an enormous amount of news every day, and it seems that the greatest challenge facing journalists and editors is how to say the same things in new and interesting ways: no budget has yet been presented to Congress; our executive branch is now being headed by Internet trolls and cruel wife-beating misanthropes; Putin wants more value for his money; and the president cannot be trusted with a cell phone at dinner. If our current administration lacks the aesthetic of a full Lynchian dystopia, its central cast is at least Dickensian. It goes without saying that Baron Harkonnen is just a sci-fi iteration of Mr. Bounderby from Hard Times.

What's actually interesting—maybe the only thing that’s ever been interesting about the empire going the way of Atlantis (or Tuvalu, if you've been paying attention to non-Trump climate news)—is the extent to which journalists are trying to emotionally cope with the situation. Michael Grynbaum and Sydney Ember, in their New York Times piece, “Journalists, Battered and Groggy, Find a Renewed Sense of Mission,” note that while this is definitely a momentous era for news organizations, the antics of the president and his cabinet have become punishing in their scope and velocity: “The news cycle begins at sunrise, as groggy reporters hear the ping of a presidential tweet, and ends sometime in the overnight hours, as newspaper editors tear up front pages scrambled by the latest revelation from Washington.” There are definitely overtones of “be careful what you wish for” here. But, more than that, there’s a continuing sense of stunned incredulity hanging over the US media, of how could this be happening?

Frank Herbert wrote in Dune, “Deep in the human unconscious is a pervasive need for a logical universe that makes sense. The real universe is always one step beyond logic.” While most of us intuitively feel this way, we're clearly not yet equipped to deal with what's taking place in our politics. And we're discovering that our news sources are equally disadvantaged by a White House that is several steps “beyond logic.” In fact, we suspect that many of our journalists, especially those in the White House press corps, might be verging on mental illness.

The US media is at that point in the horror movie where the soon-to-be victim catches a glimpse of the monster and asks, “How could this be?” So it makes sense that some of our more sensitive writers might have begun to hallucinate in the face of the surreal. When we cannot account for a miserable situation that defies explanation, we might begin to entertain the existence of DC sex rings run out of local pizza parlors. We might begin to play what-if games with history or speculate about turning points that have no relevance to anything outside our imaginations. We might even begin to speak of werewolves, ghosts, and the devil. That is, if we were losing our minds. But since we probably are losing our minds—talking about science fiction and Steve Bannon (who has compared himself to Darth Vader) and all that has become punishingly surreal and nonsensical in our national leadership—we might as well talk about the devil.

Giovanni Torriano, the great Italian paremiographer, is thought to be the first writer to bring lupus in fabula into English, a phrase at least as old as Pompeius and Cicero. It can be literally translated as “the wolf in conversation,” eventually becoming “talk of the wolf and see the fangs” or, more recognizably, “speak of the devil and he shall appear.” Torriano published the proverb in his Piazza Universale in 1666: “The English say, talk of the devil, and he's presently at your elbow.” The anxiety implicit in this phrase should not be overlooked by anyone interested in understanding the relationship between human speech and fear, between US journalism and the science fiction villain who has become its foremost subject.

Well into the Middle Ages and perhaps even into the modern era, the appearance of an eidolon—a phantom or demon from the ancient world capable of taking form on the earth—was a very real concern. Claude Lecouteux, a professor at the Sorbonne, begins The Book of Grimoires, his 2013 monograph on medieval books of magic, by talking about the link between speech and the occult: “There are certain words that fire the imagination because they evoke a disturbing yet fascinating world.”

This imaginative process may be at the heart of all human creativity: coping with a disturbing, fascinating, demon-haunted world of uncertainty by making the fear concrete. The darkness at the end of the hallway causes such excruciating anxiety (after all, anything could be lurking out there) that we give it the shape of lupus in fabula, the devil, an eidolon that can then be exorcised with iron and fire.

With this in mind, my friends and colleagues, many of whom are formidable writers, seem to be on the verge of a breakdown and have stopped writing substantive journalism altogether. Instead, they've begun speculating about the influence of deep state conspiracies and Steve Bannon's Evola-esque intellect when they should be digging into how Michael Flynn and, in all likelihood, the president, could have been on the FSB take from the beginning.

Sure, let's go back to Satanic pedo rings being run out of Comet Ping Pong and forget about Flynn's well-documented lying and extremely high potential for graft. Sally Yates, possibly one of the most ethical, reasonable players in this perverse drama, is gone now. And there won't be an investigation undertaken by those who stand to be incriminated. There's nobody to distract us from the real issues: leaks, making Mexico pay for a wall, fake news, the possibility of Satanic child abuse in the heart of our government, and other eidolons.

As Rachel Maddow put it this week, “If it were a world where stuff was predictable, we could afford to be another reckless, incoherent, random news generator among the countries of the world. But to have the United States of America be a source of this much chaos and incompetence—that really is new on this earth.” Bewilderingly, stunningly new. Comparisons to the first weeks of Andrew Jackson's administration notwithstanding, these are largely unprecedented times in our nation's history. And not in a good way.

The monotonous, one-pointed focus of the White House press corps on the issue of Russia's involvement and the incapacity of the president does not amount to the “deep state” at work. It's our writers trying to cope with the inexplicable, with the science-fiction antics of a loony president and his cabinet. In the words of “An Open Letter to Trump from the US press corps,” “We’ve been around since the founding of the republic, and our role in this great democracy has been ratified and reinforced again and again and again. You have forced us to rethink the most fundamental questions about who we are and what we are here for.” And we hope the US news media weathers this storm and actually arrives at meaningful answers to those questions. Likewise, we hope our more sensitive colleagues take a deep breath, face their fears, and quit all the ghost hunting. We don't have time for superstition.